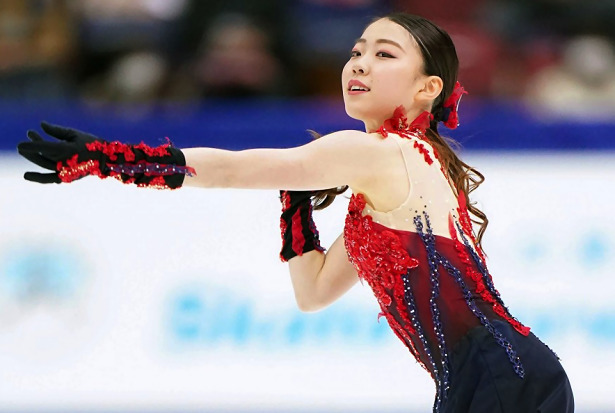 Kihira opened her routine to “The Fire Within” with a solid triple Axel which garnered many high grades of execution (GOE), but then put a foot down on a the landing of a triple flip-triple toe. The two-time Four Continents champion otherwise landed a solid triple Lutz and was awarded a level 4 on two spins and her footwork to earn 79.34 points.

The 18-year-old was relieved that she had landed her jumps. “I was awarded a decent score, so I’m satisfied. Hopefully, I will be able to make my steps more of a high point in the short program.”

Sakamoto landed a double Axel and triple Lutz, but doubled the back end of a triple flip-toe combination. All spins were graded a level 4 in her routine to “Concerto en ré mineur, BWV 974: II. Adagio” and “Bach a la Jazz,” and the 2018 Four Continents Champion scored 71.86 points.

The 20-year-old admitted to being more nervous and than usual, even during practice. “I got higher points than I expected,” she said. “Now it really depends on how well I will perform in free. So I will forget about my mistakes and do my best the day after tomorrow.”

Mihara landed a triple Lutz-triple toe, double Axel, and triple flip in her routine to “It’s Magic.” The 21-year-old was also awarded a level 4 for all spins and footwork for 69.55 points.

What are your thoughts on the Ladies’ Short Program? Discuss here.