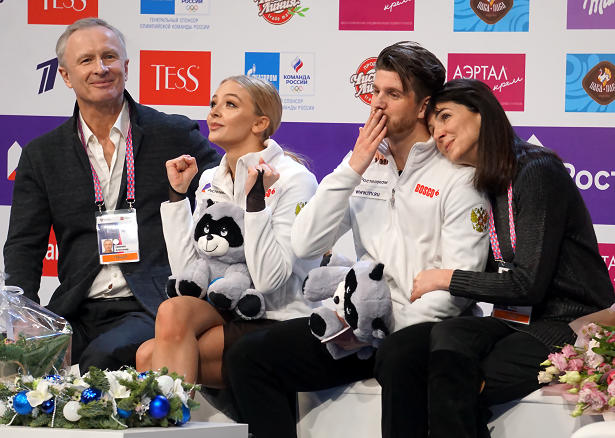 Alexandra Stepanova and Ivan Bukin await their scores at after the Free Dance at the 2020-21 Russian National Figure Skating Championships.

After coming close in the past two years, ice dancers Alexandra Stepanova and Ivan Bukin finally claimed their first national title at 2021 Russian Nationals in Chelyabinsk Friday. Tiffani Zagorski and Jonathan Guerreiro earned the silver and Anastasia Skoptcova and Kirill Aleshin made the podium for the first time, taking home the bronze.

Stepanova and Bukin kept last year’s Free Dance to “Cry Me a River” by Justin Timberlake and put out a confident, strong performance. The multiple European medalists collected a level four for the twizzles, the lifts, combination spin, and one-foot step sequence while the diagonal step sequence merited a level three. They scored 132.88 points for their Free Dance and totaled 220.16 points.

“I can’t say that we feel overjoyed,” Stepanova said about winning their first national title. “For us it was important to show what he had managed to work on. There was not much time for the preparation and we were nervous. We didn’t want to skate worse than we did last year.”

Their main rivals, defending champions Victoria Sinitsina and Nikita Katsalapov, did not participate as she is not fully recovered yet after contracting COVID-19.

Zagorski and Guerreiro turned in an energetic performance of their dance to “I’m a Survivor”, completing level-four twizzles, lifts, spin, and footwork. Only the one foot-step sequence was rated a level three. The Muscovites earned 126.92 points which added up to 210.94 points overall. This is the first silver medal at nationals for this team that won two bronze medals before.

“Tiffany and I felt a huge support,” said Guerreiro. “The music is giving us energy and also the audience again energized us. It was an interesting give and take. We feel that our program is improving and we feel more comfortable with it. We are skating it for the second year and it continues to evolve.”

Skoptcova and Aleshin had a shaky start into their passionate dance to “Never Tear Us Apart” from the Fifty Shades of Grey soundtrack when she wobbled on the twizzles that garnered only a level two for her as a result. The rest of the program went smoothly and the 2018 World Junior Champions picked up a level four for the lifts and the spin, as well as a level three for the two step sequences. With 116.78 points, the team from Moscow ranked fourth in the Free Dance but held on to third place at 196.97 points.

“We have mixed feelings about our performance,” admitted Skoptcova. “There was an obvious mistake, but we are very pleased with the result in spite of the errors. We are hoping that there will be some more competitions and we can show our programs again.”

Sofia Shevchenko and Igor Eremenko came in fourth after an expressive performance to “The Illusionist” by Maxime Rodriguez. The twizzles and the lifts were a level four while three other elements were a level three. The 2019 World Junior bronze medalists ranked fifth in the Free Dance with 116.46 points but moved up to fourth place overall at 194.29 points.

“We tried really hard in the Free Dance,” said Eremenko said. “Obviously, you can always find some imperfections, but we tried to show what we’ve  have worked on and fix our mistakes that we had at the fifth event of the Russian Cup series. Our program is quite interesting, it is developing and there are always some changes. Every time we are working with our choreographer, our story gets some new facets.”

Elizaveta Khudaiberdieva and Egor Bazin dropped from fourth to fifth at 192.68 points after she stumbled on a twizzle. They scored 114.67 points for the Free Dance and 192.68 points overall.

“We lacked confidence,” was all Bazin had to say while his partner was close to tears.

Annabelle Morozov and Andrei Bagin redeemed themselves with an excellent performance of their dance to “La Terra Rossa,” completing five level-four elements. They came in third in the Free Dance with 120.69 points, but they were too far behind after their faulty Rhythm Dance and only pulled up one spot to sixth at 182.86 points.

“It was difficult for me to go out today. I never had such a rough performance before (like in the Rhythm Dance),” Morozov admitted. “But I just tried to forget about yesterday and we are very pleased with how we performed today.”

Bagin said he felt very motivated to go out in the Free Dance and prove what they are capable of.