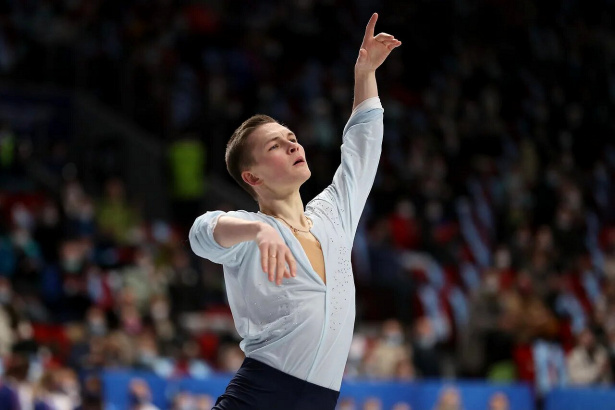 Mikhail Kolyada continued his golden comeback this season at the 2020-21 Russian National Figure Skating Championships, scoring a runaway victory with 30 points to spare and skating off with his third national title on Friday in Chelyabinsk. He is joined by two newcomers on the podium: Makar Ignatov and Mark Kondratiuk took home their first national medals, silver and bronze, respectively.

Overnight leader Kolyada cast a spell on to the audience as soon as his music “Nureyev” from the movie The White Crow began. He reeled off a quad toe-triple toe and a quad toe and followed up with a triple Lutz-Euler-double Salchow, triple Axel-double toe, triple flip, and loop. The only glitch came when the 2018 World bronze medalist stepped out of his first triple Axel and the flip received an edge call. His exquisite spins and footwork merited all level 4s and high grade of execution (GOE) marks. As soon as the program ended, the crowd rose for a standing ovation, and the skater scored 193.67 points, racking up 296.15 points overall.

“It was not ideal, obviously. It was a good working performance,” the 25-year-old said. “Compared to the other Russian Championship titles, this is one of the most meaningful as after a long break it is always hard as well as interesting to come back. All my championships have been very tough and crazily interesting. It gets more and more interesting with each competition.”

Ignatov had drawn to skate last and opened his program to “Je suis malade” with a solid quad loop. He then went for a quad toe and a quad toe-Euler-double Salchow, but the landings were wobbly. Four more triples followed, but the skater from St. Petersburg lost points on the GOEs as well as on a level on two spins. With a score of 167.07 points, Ignatov ranked third in the Free Skate, but remained in second at 265.37 points total.

“I am happy that I pushed through and that is it over,” said the 20-year-old. “It is mentally hard to compete, after all. In addition to the emotions, you also feel the responsibility before your coach. That is really palpable.”

Kondratiuk basically came out of nowhere to take the bronze in his debut at senior Nationals. The 17-year-old from Moscow had already surprised in the Short Program when he came third.

Skating to an adaption of Swan Lake called “After the Nightmare,” Kondratiuk hit a somewhat shaky triple Axel, a quad Salchow-triple toe and another quad Salchow, as well as a triple Lutz-double Axel sequence. However, he fell on the back end of his triple Axel-Euler-triple Salchow combination. He picked up 169.43 points and was second in the Free and accumulated 260.31 points overall.

“I am not completely happy with my performance as there were some errors, including a serious fall in the combination,” he noted, “but I am very happy with my result and with the bronze medal. When I saw my score, I honestly did not think I would be in the top three. When I realized it, I had mixed emotions – happiness and some kind of relief. I have not yet fully realized it yet.”

Andrei Mozalev seemed on his way to the podium in the first 20 seconds of his routine to “The Man with the Harmonica” when he nailed a quad flip, a slightly underrotated quad toe-triple toe and a triple loop. However, he then missed his second quad toe and the program went downhill. He popped his first Axel and fell on the second triple Axel attempt. The reigning World Junior champion recovered to land a triple Lutz-Euler-triple Salchow combination, but that was not enough. The 17-year-old remained in fourth place at 252.92 points.

Alexander Samarin fell on his opening quad toe but recovered to land five triples including two Axels. However, some landings were wobbly and a loop was slightly underrotated. The 2019 European silver medalist remained in fifth place at 251.38 points.

“Miracles didn’t happen, although there was hope,” said the 22-year-old. “As I said after the Short Program, because of my injury I have not been skating that long and that much, not like the other guys who had a specific preparation. I need time to heal the (back) injury. But this is in no way a justification.”

Anton Shulepov turned in an expressive and flawless routine to the Inception soundtrack that featured eight triple jumps. The 24-year-old, who did not risk a quad, moved up from ninth to sixth place on 249.89 points.

“We went for two clean skates and I am very pleased that it worked out,” said Shulepov. “I was very emotional at the end, there were reasons for it, but I don’t want to talk about them now.” He did not confirm rumors about his imminent retirement.

Petr Gumennik delivered a dramatic performance to The Phantom of the Opera that was highlighted by a quad Salchow-double toe-double loop and a triple Lutz-triple loop combination. However, the 2020 Rostelecom Cup bronze medalist fell on a triple Axel, stumbled on another one, and slightly underrotated his solo quad Salchow. He placed seventh at 247.47 points.

“It was better today. I knew at what time I had to take the painkillers so they work ideally and my back hurt less,” Gumennik explained. “I am glad that I went through it and did not withdraw. I also had a good score.”

What are your thoughts on the Men’s Free Skate? Discuss here.