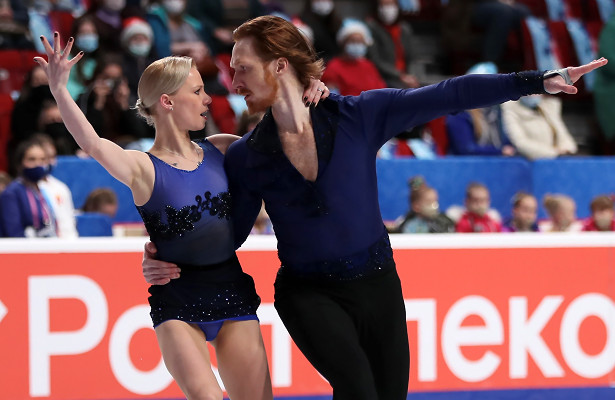 Evgenia Tarasova and Vladimir Morozov stormed to the lead with an excellent Short Program at the 2020-21 Russian Nationals in Chelyabinsk on Thursday. Defending champions Aleksandra Boikova and Dmitrii Kozlovskii came in second while Daria Pavliuchenko and Denis Khodykin are currently ranked third.

Skating to “Bolero” by Maurice Ravel, Tarasova and Morozov completed a side-by-side triple toeloop, a high triple twist and throw triple loop. The two-time European champions earned a level four for all “level” elements such as the lift, the side-by-side spin, death spiral, footwork and twist to score 80.65 points.

This feat was impressive given that Tarasova suffered from pneumonia and was off the ice for two weeks before resuming training about three weeks ago.

Tarasova added that coach Maxim Trankov criticized their exit from the spin. The team also lost a point due to a late start – which was actually Trankov’s fault as he gave his skaters a long “pep talk” at the boards before they took their position.

Boikova and Kozlovskii opened their romantic program to music from The Star of Captivating Happiness with an excellent side-by-side triple Salchow and a triple twist, but then Boikova stepped out of the landing of the throw triple Lutz. The reigning European champions recovered to produce strong pair elements such as the death spiral, lift, and side-by-side spin that were all graded a level four. They picked up 77.48 points.

“It is great to be here!” Kozlovskii told the press. “It is a bit difficult to commentate on today as this is already a past event. Tomorrow we have a day off from competition and we’ll have the opportunity to refocus. The day after tomorrow everything will be more right.”

Pavliuchenko and Khodykin turned in a lively program to “Sing, Sing, Sing” that was highlighted by a triple twist, triple toeloop and throw triple loop. All level elements were graded a level 4 and the 2020 European bronze medalists scored 77.01 points.

“We are very pleased that our performance worked out well and that we are here in Chelyabinsk,” said Khodykin. “The audience is very welcoming, which is characteristic for Chelyabinsk. Thanks to everybody for their support and who came here in this epidemic situation!”

World Junior Champions Apollinariia Panfilova and Dmitry Rylov finished fourth with 74.51 points. Performing to music from the Joker, they impressed with their huge triple twist and throw triple flip, but they only risked a double Axel as their solo jump. They also received negative grades of execution on the change foot combination spin.

“We are not so happy with the spin, as we were out of unison,” Panfilova said. “To be honest, there was a hole in the ice where I was spinning,” Rylov explained. The skaters added that they plan a side-by-side triple jump in the Free Skate.

Anastasia Mishina and Alexandr Galliamov were expected to challenge for first place, but when Galliamov missed the take-off for the Salchow and popped the jump, they had to settle for fifth place with their Short Program to Esmeralda with 73.25 points. The other elements, including the twist and the throw triple Lutz, were strong.

“Maybe there was a tracing in the ice, but I don’t want to justify myself,” Galliamov commented. “The ice is quite good, but it is a bit unusual that the ice is two meters smaller than the normal surface. Tomorrow we’ll have some rest and then continue the competitions. We’ll try to sleep well and start a new day tomorrow.”

What are your thoughts on the Pair’s Short Program? Discuss here.