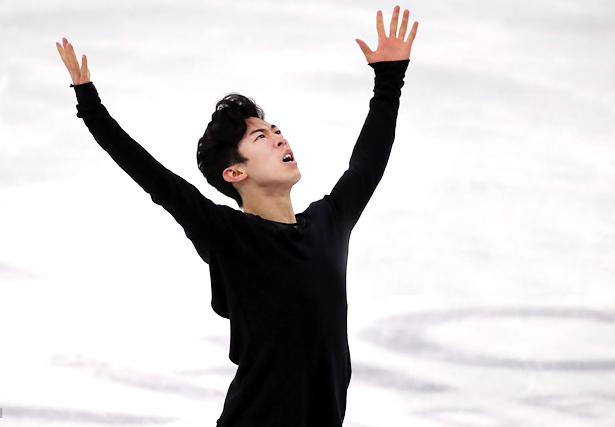 The Men’s event concluded with the Free Skate on Saturday afternoon at the 2021 World Figure Skating Championships in Stockholm, Sweden. USA’s Nathan Chen rose from third place to defend his world title and pocketed his third consecutive gold medal. Yuma Kagiyama of Japan captured the silver in his debut at this event, while teammate Yuzuru Hanyu settled for bronze.

“It’s amazing,” said the rather stoic 21-year-old. “The fact that I’m able to be here at this world championship after that unprecedented year—I’m very happy to be here. I’m very elated right now. I just tried to remind myself to enjoy being here. The fact that I don’t know how many more world championships I’ll be able to compete in, I tried to embrace this moment and remember that. It’s such a cool experience for me to be here; I’m really lucky and I tried to remind myself of that.”

Chen plans to go home and spend time with his family before working on two new programs for the Olympic season.

Kagiyama produced a solid quad Salchow, quad toe-triple toe and quad toe in his powerful “Avatar” routine. The only mistakes came when he stepped out of a triple Lutz-triple loop and triple Axel, but the 2020 NHK Trophy champion otherwise showed level-four spins and footwork to finish second in the free skate (190.81) and maintained second overall with 291.77 points.

“Today I had a little bit of mistakes,” said the 2020 ISU Four Continents bronze medalist. “I wasn’t coordinated well with my jumps, so I need to train on my adjustment and should be skating more like a senior skater. To be honest, I was really surprised how well I did after my performance. So, of course, as for the outcome, I’m very happy. And being here, I wanted to make sure I landed on the podium. That’s what I’ve trained for and I guess my work has paid off. Of course I couldn’t put out everything I wanted out there on the ice here in Stockholm. Having said that, I’m really happy with the results that I received.”

Hanyu finished fourth in the free skate with 182.20 points after struggling with several jumps. The two-time Olympic Champion put a hand down on his opening quad loop and then underrotated and stepped out of a quad Salchow. He showed strength in the second half of his “Heaven and Earth” routine when he landed a quad toe-triple toe and quad toe-Euler-triple Salchow and displayed level-four spins and footwork throughout. However, his overall score of 289.18 wasn’t enough to keep him in first and he slipped to third overall.

“It was very exhausting and it was like I was losing my balance one by one, but I tried to make sure that I don’t fall, so I did work hard to make sure I kept it together,” said the 26-year-old. “I realized that there were a lot of jumps one after another that were not clean. I don’t know when the next competition might be, but I just want to go back to practice to train on my quad Axel and continue to work to land it so that I can use it in a real competition.”

“Overall, I wasn’t feeling that bad,” added Hanyu, “and in the practice, it wasn’t that bad either. But all of a sudden going into my program, my balance started to crumble. That’s the sense that I got. Maybe, yes, practicing the quad Axel might have had some effect, but rather than that, it’s more like I was losing balance one by one. I couldn’t bring back the right equilibrium and maybe the axis was a little bit off. Having said all of that, it’s not a major issue, but what I worked hard in training and what I was mindful during the training, all of that, I was able to put on the ice anyway.”

Teammate Shoma Uno also had problems with some of his jumping passes in his routine. The 2018 Olympic silver medalist two-footed his opening quad Salchow, stepped out of a quad toe, and turned out the landing of a triple Axel. However, he produced a good quad flip and quad toe-double toe while showing good level-four spins and footwork throughout. He scored 184.82 for a third place finish in the free skate and move up to fourth overall (277.44).

“Just to reflect on what I did today, it’s not particularly about this program, but overall, when I came to Sweden, I wasn’t able to train well and my jumps were not working well,” shared the 23-year-old. “But given the circumstances I was able to maximize my training here and that’s what contributed to a better program. So given all the negative aspects and the condition I was in, I was able to improve my performance. When I was in Switzerland, I was jumping better, but the challenge here was all about adjusting to make sure I can perform well.”

“Towards the Olympics, I’m sure there are a lot of things that are important, but nothing is that important for me at this moment,” said Uno regarding future plans. “I don’t want to sound sarcastic, but I’ve not been selected as a Olympic skater yet, so this is where I am today.”

Mikhail Kolyada (FSR) took a fall on a triple Axel and received an edge call on a triple flip in the second half of his routine to to “Nureyev. However, the 2018 World bronze medalist landed a solid quad toe-triple toe and quad toe and displayed level-four spins and footwork throughout to finish fifth (178.52) in the free skate and overall (272.04).

“For myself personally, the goal was to do a good job, as strange as it may sound, and there’s nothing else to add,” said the 26-year-old. “There were many errors and we’ll get home and analyze everything in detail. I like the program very much, and we’ll think about the next season. Alexei Mishin is a very wise mentor and I trust him completely.”

Canada’s Keegan Messing turned out a triple Axel and doubled a triple flip, but landed a quad toe-double toe, quad toe, and five clean triple jumps. The 2020 Skate America bronze medalist, who sported duct tape on both boots for extra support, also showed very good level-four spins in his routine to “November Rain.” He finished sixth (176.75) in the free skate and overall (270.26).

“I feel absolutely incredible to be able to go out there and to put that kind of program out,” said the 29-year-old. “I was really trying not to think about the nerves. I had the pressure to bring those two spots for Canada and it was quite a heavy burden. I said it before coming here that Nam (Nguyen) and I are going to do it together going out there and together we did it. He was there with me backstage, on the ice and gave me the strength that I needed to push this program. I couldn’t have done it without him. So thankful to have such a good buddy to have there with me.”

The expecting father is planning for his new baby in July. “I can not wait! I finished my job here as far as the season and I get to focus on the baby. I get to make a crib for it and I’m so overjoyed! My wife has been sending the pictures and videos of her belly moving. I’ve been keeping my hopes high here and as much as I say thanks to Nam, I have to say thank you to my wife and my unborn child. It’s the most wonderful feeling and I can’t believe my world will turn upside down. It’s going be wonderful!”

USA’s Jason Brown underrotated his opening quad Salchow and put a foot down on a triple Axel, but landed a total of six clean triple jumps while showing level-four spins and footwork throughout. The 26-year-old placed eighth (170.92) in the free skate and seventh (262.17) overall.

“My face said it all,” said the two-time Four Continents medalist. “It was a mix of grateful, relieved and proud. As you know, it’s been a crazy season, this has been a crazy event and I wanted to pull my weight and do the best I possibly could for Team USA. I wanted to go out there and give it my all. When I got off the ice there was that sense of pride that I was able to accomplish that goal and stay as focused as I possibly could.”

Brown’s plans are to go home to spend time with his family and then back to Toronto in May. “I can relax a little bit knowing I will be going back to an old program most likely, so there is a little bit of sense of calm knowing the program is ready in the wings to work on when I’m in Chicago.”