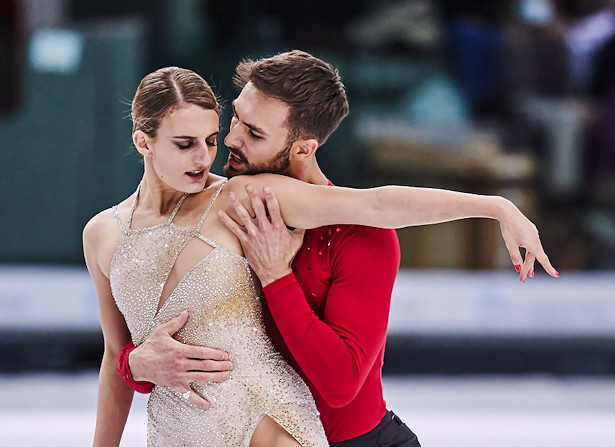 Papadakis and Cizeron racked up a huge amount of positive grades of execution (GOE) in their routine to “Elegie” by Gabriel Faure. The 2018 Olympic silver medalists showed very strong level-four twizzles, lifts, and combination spin. He received a level four on the one-foot steps while she earned a level three, and the diagonal steps were also graded a level three.

“We’re very happy with our performance today,” said Cizeron. “We’ve made some improvements since Finlandia Trophy. We really pushed ourselves in the last few weeks to get our levels up. There are a lot of things to work on before the next Grand Prix and we know there’s lot of improvement to be made. We’re looking forward to seeing this program evolve.”

Hubbell and Donohue also earned a level four on their twizzles, lifts, and combination spin in their performance to “Drowning” by Anne Sila. The two-time World silver medalists earned a level on their circular steps, but at the end, there was a slight bobble on the choreographic lift which resulted in negative GOEs. The team finished second in the free dance and overall (123.11/207.90).

“We made a mistake at the end but sometimes you jump in the air and you hit your partner in the crotch,” laughed Hubbell, adding to her partner ‘thank you for not falling over, Zach!’ We are disappointed with the score today and our combo lift, so we need to get the feedback on that. Our connection to the program is growing.”

“There were a lot of amazing things since Skate America, but the lift will cost us points,” agreed Donohue. “We’re taking away a lot of positive things. This season is the quickest turn around of events which is good experience. It’s really tough on mentality. We will focus on how we can bring up both scores for the Final.”

This will be Hubbell and Donohue’s last competitive season.

“There comes a time when you just have to say that you are happy with everything you have accomplished,” said Hubbell. “This year has culminated with us falling back in love with the sport.”

Stepanova and Bukin showed good level-four lifts and level three diagonal steps in their “Romeo and Juliet” routine. The 2020 European bronze medalists received a level two on their one-foot steps and finished third in the free dance and overall (120.71/202.18).

The team felt they were lacking a bit in confidence coming into this event, but are happy to be back. They feel that the free dance is a different style for them and wanted to tell a true story on the ice.

“We showed what we are capable of as of this moment, so we are satisfied,” said Liu. “This is the first year that we did full online choreography and training, so there are some challenges, but we also encourage each other to make the best out of what we can do right now. The coaches also said that we can do better. Similar to the Rhythm Dance yesterday, we lost a lot of levels on the elements. Achieving higher levels used to be our strength, so there is a lot of work to do.”

USA’s Caroline Green and Michael Parsons took a fall on an extended left for two deductions. They finished fifth sixth in the free dance and fifth overall (102.66/178.26)

“We made some progress after Skate Canada, but obviously that did not come through today,” said Parsons. “There is some emotional recovery that has to take place after a Free Dance.”

Their next event will be the Challenger Series Warsaw Cup in Poland.

“We feel pretty good!” said Brissaud. “We made some tiny mistakes, but we got a season’s best so that is good!”

“We are very happy with our performance today!” said Firus. “We were very focused and present.”

“We felt it was solid,” said Dieck. It had a like a practice feeling. Overall it was good! We just have to continue to work.”