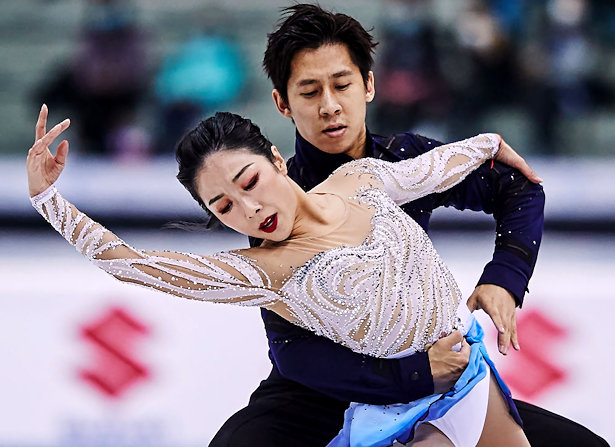 Wenjing Sui and Cong Han of China won the gold in the Pairs’ event on Saturday at 2021 Gran Premio d’Italia in Torino, Italy, adding another medal to their collection of 18 Grand Prix medals they have accumulated since 2010. Teammates Cheng Peng and Yang Jin earned the silver, while Grand Prix debutants Iuliia Artemeva and Mikhail Nazarychev of Russia captured the bronze.

Sui and Han were near-perfect in the first half of their routine to “Bridge Over Troubled Water” which fetched many positive grades of execution (GOE). The 2018 Olympic Champions showed a strong level-four triple twist and clean side-by-side triple toe-double-toe-double toes and triple Salchows. However there were small mistakes in the second half: the pair combination spin was graded a level three with a “V”, Sui double-footed the landing of a throw triple Salchow, and the team struggled a bit on the final lift which was graded a level three. They scored 144.48 for first place in the free skate and overall (224.55) with nearly 13 points to spare.

“We appreciate the chance to compete here and are very happy that we won this competition,” said Han. “We also would like to thank the audience. We know that we have room to grow and we will work hard on that.”

“I really treasure the relationship between us as we have helped each other,” said Sui of her partnership with Han. “There were a lot of times we had tears in our eyes as we worked with Lori (Nichol) as we really feel connected to this program. We hope it can be a bridge for everyone to connect in these times.”

Peng and Jin showed a good triple twist, two level-four lifts and a solid throw triple Salchow in their performance to music from The Banquet soundtrack. Peng slightly underrotated the opening triple Salchows and stepped out of the throw triple loop, and the team scored 135.14 for second in the free skate and overall (211.86).

“We still have some problems we need to fix,” said Peng. “We will keep working on getting the program better. Our teammates did quite well!”

“The first time we saw Marie-France (Dubreuil) was yesterday,” said Jin. “We worked together for two years and she gave us so much advice. We feel the short program is good and we love it. We enjoyed the competition and this opportunity is very important. It was very exciting”

Artemeva and Nazarychev scored new personal bests in the free skate and total score (125.11/187.01) in their Grand Prix debut at this event. The 2020 World Junior bronze medalists produced side-by-side double Axel-Euler-triple Salchows, a triple twist three level-four lifts and a throw triple loop. However, there was a fall on the side-by-side triple toes and a step out on the throw triple flip.

“This is our first and only Grand Prix,” said Artemeva. “We really treasure this opportunity and experience and were happy to see the audience cheering for us!”

“We were prepared well and had good practices,” added Nazarychev. “Today we maybe did 70 percent of what we planned. The second part of the program we wanted to enjoy and we’ll work on the mistakes we made.”

Nicole Della Monica and Matteo Guarise of Italy, who stood in third coming into the free skate, finished fourth in the free skate and overall (114.14/179.26). The 2021 Lombardia Trophy Champions struggled on both throw jumps as well as the side-by-side triple Salchows.

“I think we approached the competition in a good way, but today was hard physically and mentally,” said Guarise. “We don’t know why as we’ve been doing good in training. We hope that it will be better at the next competition (Rostelecom Cup).”