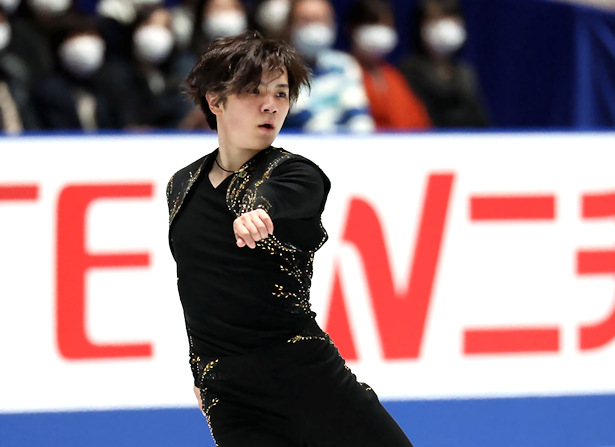 Japan’s Shoma Uno defended his title at 2021 NHK Trophy in the Men’s event on Saturday in Tokyo, Japan. USA’s Vincent Zhou settled for silver while Junhwan Cha of South Korea pocketed the bronze.

Overnight leader Uno gave a very strong performance to “Bolero” in which he landed three out of five planned quad jumps. The first three jumps, a quad loop, quad Salchow-double toe, and triple Axel were very good. He doubled a planned quad flip before turning out the landing of a quad toe, but those were the only two mistakes in his program which also featured level-four spins. The 2018 Olympic silver medalist finished first in the free skate and overall (187.57/290.15).

“I think the reason for the success was the past few days I saw a lot of improvement on my Salchow,” he said. “The feel of the ice was the same as my training ice. This season, I’ve only participated in three competition, but it’s been intense. I have to go beyond that and train more.”

Going into the Grand Prix Final, Uno hopes the quad loop will become more consistent. In fact, the skater would put it in the second half of his program, if he could, to make it more challenging.

“It’s difficult to explain in words, but there were seasons where I really had to make a lot of effort,” he responded when asked about how his passion is resonating on the ice. “It’s more about enjoying skating and that may have changed things. I still want to grow more, of course. When I look at the support and the expectations people have in me, I really want to show them and respond to those expectations. Coincidentally, I’m improving as a skater. All the aspects of my life right now are focused on skating.”

When Uno looks at the recent trend and high level of men’s figure skating, he feels that as long as Nathan Chen is laying down solid programs, no one else can be “number one.”

“So it’s important to have the full package,” the 24-year-old explained. “If you have the right frame of mind, you start from the atmosphere around you and realize you are back in the game. I believe I can become a better skater.”

Zhou struggled in his free skate, popping an intended quad Lutz and underrotating most of the jumps. The only clean jump was a very good quad flip, but the 2019 World bronze medalist laid down three level-four spins and footwork in his “Crouching Tiger, Hidden Dragon” routine. He placed sixth (161.18) in the free skate, but was able to maintain second overall with a total score of (260.69).

“There is so much I want to say, but I don’t know how,” said Zhou. “I’m very disappointed and made a lot of mistakes and wish I could have done better and capitalize on this opportunity. This is not representative of my training. Everything happens for a reason. My team and I will make sure that things are much better leading up to the next competition. Doing five quads in a long program takes a huge amount of effort which takes intense and consistent training. I just didn’t have the training to that for this competition.”

Cha fell on an underrotated quad Salchow and also underrotated two triple jumps, but landed a solid quad toe, triple Axel and triple flip. Two spins and the footwork were graded a level four with high GOEs and the five-time national champion finished fifth in the free skate and third overall (163.68/259.60).

“I’m happy but also disappointed because I had a lot of mistakes, I really fought through,” said Cha. “I gave everything to the audience, judges, and my family and friends in Korea.”

Makar Ignatov of Russia maintained fourth place overall (257.20) after finishing fourth in the free skate (166.66). The Russian National silver medalist slightly underrotated his opening quad loop, but landed a quad Salchow, quad toe-triple toe, and quad toe. However, there were some minor mistakes which resulted in negative GOEs in several non-jumping elements and only one spin was graded a level four.

Italy’s Matteo Rizzo put out a good routine which featured a quad toe-double toe and six solid jumps, including two triple Axels which received a fair amount of positive GOEs. All spins and footwork were graded a level four and the 2019 European bronze medalist finished third in the free skate and (171.06) and moved up from sixth to fifth place overall (255.84).

“I was a little bit tired,” admitted Rizzo. “Yesterday and today was very long, so it was complicated. But I’m happy with my performance. Today was a big step and I only did one quad and went over 170.”

Russia’s Alexander Samarin gave a strong performance which featured a quad Lutz-triple toe and six additional clean triple jumps. The spins and footwork were graded a level four and the 2019 European silver medalist finished second in the free skate with a new season’s best of 171.33. A total score of 255.65 moved him up from seventh to sixth place overall.

“It was clearly better than yesterday, and I’m happy about that, but I can still do better,” said the 23-year-old from Moscow. “The mistakes cost me some stamina and points.”

“It was a lot of fun and I was able to show myself in international competition,” said the Japanese National junior silver medalist. “My coach said to put on a smile and enjoy it, so there was no pressure. I was trying to perform without falling or popping my jumps.”

“I really wanted to focus on doing my three quads and I was able to do that,” said Hiwatashi, who was ninth going into the free skate. “I really want to work on the jumps where I got an underrotation. I can do it in practice, I just need to execute them in the program.”

“I’m happy I got the quad but there’s a whole bunch of other elements that I need to improve the quality,” said Nam of his free skate. “Tapering around the 140-mark is a reflection of how I’ve been focusing on my training. I recently just got my quad a few weeks ago and I’ve been neglecting the connection between the elements. When I get home I need to rest!”