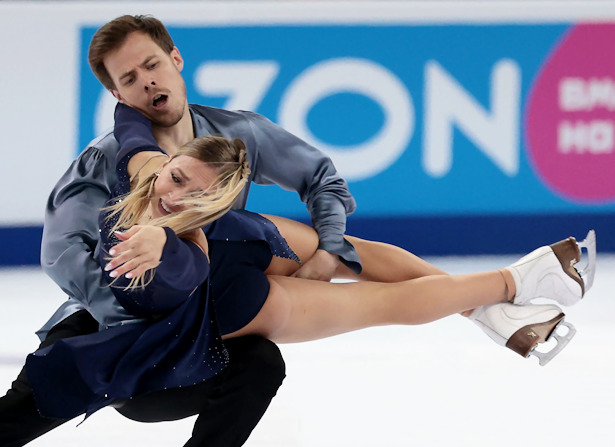 Sinitsina and Katsalapov delivered a nice performance to Rachmaninov’s “Second Piano Concerto” and “Variations on a Theme of Paganini”, but Katsalapov lost his balance on the exit of their stationary lift which was graded a level three, and the curve and rotational lift received a one-point deduction each for being extended. However, the The 2019 World silver medalists still received a level four for the latter two lifts, as well as the one-foot steps, twizzles, and the combination spin. They scored 124.91 points for first place in the free dance and finished first overall (211.72) to win their second Grand Prix gold medal this season.

“The mistake is exactly that, a mistake,” said Katsalapov. “We did not expect it. I wanted to put Viktoria down from the lift as gently as possible and probably overdid it. That is easy to fix. The two deductions for the extended lifts are something to work on. I am not happy with our skate today, but it’s an experience and am not going to be upset about it.”

“We are just at the start at our season, so we want to move on from here and improve with every competition,” said Sinitsina. “We had a mistake today, but we know how to fix that, and we are really mentally in good shape and looking forward to the Grand Prix Final.”

Guignard and Fabbri put out an excellent performance of their program to Atonement that was highlighted by their lifts and smooth footwork. Four elements were rated a level four while two elements merited a level three. The three-time Italian Champions came very close to the Russians in the Free Dance with 124.15 points, and they finished second overall (203.71).

“Even tough we didn’t have a season’s best, we think we skated the best free dance this season,” said Fabbri, adding that they still need to work on the Rhythm Dance. “It was unexpectedly easy to skate today. Today we felt like we had a lot of energy left at the end of the program, so we could show our emotion and our satisfaction. We are proud to be in the Grand Prix Final in the Olympic season because all the top teams competed this year in the Grand Prix.”

Fournier-Beaudry and Soerensen finished third (115.01) in the free dance and overall (191.40) after their performance which featured interesting level-four lifts. The Canadian bronze medalists received a one-point deduction on an extended choreo lift, but otherwise produced a level-four combination spin and twizzles (level three for him).

“We had really a good time!” said Soerensen. “The small mistake at the end ended up costing more than I wanted to – the choreo lift was too long.”

“We were really happy about how we skated the free dance,” said Fournier-Beaudry. “We have been improving from competition to competition. We are very happy about the progression that we made. Skating for the crowd here was amazing! This was the first time that we did the first and the last Grand Prix and were able to do a competition in between. We had a very good season so far. We trained a lot of clean programs at home and we are happy we could show the same as we produce in training in competition.”

“At Skate America, we still had some level ones and that needs to be avoided, so we made a lot of changes, especially in the free dance,” added Sorensen. “We worked on that. It was a good learning experience for us that we had these five weeks in between (two Grand Prix events). We really strive towards consistency. We look for perfection, getting as close to that as possible.”

Spain’s Sara Hurtado and Kirill Khaliavin only earned a level three on the twizzles and the one-foot steps were a level two for her and level three for him in their routine to music by Led Zeppelin. However, the three lifts and spin were graded a level four and the national silver medalists finished fourth (114.00) in the free dance and overall (189.94).

“We feel the program is becoming more a whole thing, not only single elements, the pictures come together,” explained Hurtado of the free dance. “We feel like we improved since our first grand prix. The feedback we got there was really meaningful. Even though we come from different cultures, we feel like we have similar things that we like and dislike.”

The Spanish silver medalists train alongside Sinitsina and Katsalapov and Hurtado, who is from Madrid, says that it feels like ‘home’ in Moscow. She added that Coach Zhulin doesn’t say much, but when he does, it’s “meaningful.”

“Of course we have different goals than them (Sinitsina and Katsalapov), but we feel the pressure the same way,” said Hurtado.

Kaitlin Hawayek and Jean-Luc Baker finished fifth (113.90) in the free dance and overall (187.62). Their routine to music by Chopin featured level-four twizzles, lifts and spin, however both skaters only earned a level two on the one-foot steps.

“We are both very happy to get our first performance of the season on our legs,” said Hawayek. “There is still a lot of potential for the programs to grow.”

“It was great to start the season here,” agreed Baker. “We have big goals for this season, we are very happy for the season today.”

Hawayek has been “dreaming” of skating to the free dance music since she started Ice Dance.

“Kaitlin had a vision about this program,” said Baker. “She made it all up, the costume and everything.”

“This is a perfect season for it,” said Hawayek. “There is a lot of maturity and depth in this music. There is nostalgia, hopefulness and happiness. I envisioned something that was not too heavy but also not too youthful.”

The three-time national bronze medalists will compete next at the Challenger event Golden Skate in Zagreb and then Nationals, Olympics, and Worlds.

“We are all around pretty pleased,” said Ambrulevicius. “We didn’t have too much time since our last competition, but we did improve on some levels, so we are happy about that.”

“Our free dance is a story about love, finding ways to make each other happy, figuring out the other person, and finding out what the other one thinks,” explained Reed of the free dance to “Vinegar & Salt” by Hooverphonic and “White Lies” by Karl Hugo.

With the six Grand Prix events concluded, the unofficial standings for the Ice Dance discipline going into the Final are as follows: