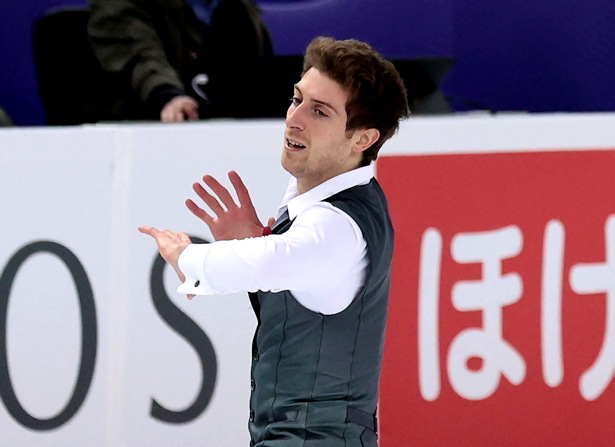 Morisi Kvitelashvili made history on Saturday when he became the first figure skater from Georgia to win a Grand Prix gold medal when he captured the Men’s title at 2021 Rostelecom Cup. Headliner Mikhail Kolyada of Russia rose from fourth to claim the second spot on the podium, while Japan’s Kazuki Tomono pocketed the bronze.

Kvitelashvili, who stood in second coming into the free skate, opened his “Frank Sinatra” routine with a quad Salchow-double toe, triple Axel, and a very good quad toe-triple toe which received many positive grades of execution (GOE). The 2020 European bronze medalist later fell on a quad toe, but landed a total of six triple jumps and displayed three level-four spins and footwork throughout. While he placed third in the free skate (170.96), he finished first overall with a total score of 266.33. All three scores at this event were new personal bests for the Georgian national champ.

“I would like to congratulate the other medalists,” said Kvitelashvili. “Not everything worked out perfectly, but I am happy to be on the podium. Thank you to my coaching team, the Georgian Federation, my parents, and everyone who supported me! I have not really realized what I achieved here, but I think it will come in time. I will take great memories from this competition, the atmosphere was so warm and welcoming!”

Kolyada moved up from fourth to second overall (264.64) after placing first in the free skate (180.16). The 2018 World bronze medalist fell on his opening quad Salchow and also stepped out and put a hand down on the landing of a quad toe, but later managed a solid quad toe-triple toe in the latter half of his routine. He also landed four clean triple jumps, including two very good triple Axels, and showed strong level-four spins and footwork in his program to music from Schindler’s List.

“I would like to thank my team for all the productive work we have done and for everyone who believed in me,” said Kolyada. “I have mixed feelings about this event, some things worked out some didn’t, but as Morisi said, the energy and atmosphere here was great. Thank you, Sochi!

“The Grand Prix Final will be interesting, I love skating in Japan,” he added, but not wanting to comment on his goals for that event. “We have some plans for the future competitions and I am looking forward to working on them.”

Tomono, who stood in first after the short program, placed fifth (168.38) in the free skate and slipped to third overall (264.19). The 2020 NHK Trophy silver medalist landed a solid quad toe-triple toe and earned a level four on his spins and footwork, but slightly underrotated a quad salchow, stepped out of a triple loop, and fell on a triple Axel. All three scores in this event were new personal bests for the 23-year-old from Osaka.

“I am really happy about the medal, but I am still disappointed,” said Tomono. “I am a bit shocked about myself feeling that emotion. Being in the lead yesterday, I had the chance to be on top. Nerves got to me a bit. It was the very first time I was in such a situation, so I think it was a learning experience. I hope I can skate at the Gala tomorrow and I want to show everyone there what kind of a skater I am.”

Roman Sadovsky of Canada finished fourth in the free skate (169.21) and overall (253.80). The national champion turned out the landing of a quad salchow and triple Axel, but showed a quad Salchow-Euler-triple Salchow, five clean triple jumps and received a level four for all spins and footwork.

“I am very, very pleased!” said the 22-year-old from Toronto. “I think I beat my season’s best by about 30 points. “That’s what I was aiming for. I am planning to build from here. I don’t think the placement after the short program (third) affected my mental game. I just focused on my own training. Towards nationals, I want to fix some little details, but I don’t have a great masterplan.”

Italy’s Matteo Rizzo rebounded from ninth to fifth overall (250.47) after placing second in the free skate (173.02). His routine to “Two Men In Love” by The Irrepressibles featured  a quad toe-triple toe and seven additional clean triple jumps, as well as level-four spins and footwork.

“Yesterday I was very upset, because I trained really good during the last weeks and months,” said the 2019 European bronze medalist. “Today, my performance was great despite a mistake on my first quad (fall in the short program). I hope I can also do a good short program next time. I knew I could do better, I just had to forget about what happened yesterday. I had to enjoy skating more.”

“The last Olympics were a great experience for me, I did two clean skates,” said Rizzo when asked about his goal for the upcoming Olympics. “I didn’t have too many expectations regarding my placement. This time my goal is to place in the top 10, so it’s totally different this time.”

Evgeni Semenenko of Russia hung on to the landing of his opening quad toe-triple toe, but put hand down on a quad Salchow before taking fall on an underrotated triple Axel. He also stepped out of and put a hand down on a triple flip to finish sixth (165.66) in the free skate and overall (246.66).

USA’s Camden Pulkinen fell on his opening quad toe, but landed a total of seven triple jumps to finish in his free skate to finish seventh overall (231.88).

“It definitely could have been better, but I am happy that I could improve from NHK Trophy,” said the 21-year-old from Colorado Springs. “I am happy I could deliver an almost clean program after the mistake on the quad toeloop. I would like to work a lot on my quads towards Nationals and maybe go for two in the long program. You have to risk it for the biscuit.”

“You might consider me a veteran, but there still so many kinds of music that I still want to skate to,” said Tanaka, who is a fan of Evangelion. “I always want to show something new and different.”

Czech Republic’s Michal Brezina, who stood in sixth after the short, finished 11th in the free skate and 10th overall (219.59).

“If I summarize both my Grand Prix performances, I skated one good short program here one good long program at Skate America,” said Brezina. “I wish I could put them together. I am physically ready to do it. I think it’s more mental and I need to trust myself more.”

“Unless Alexei Bychenko is there, I am always the oldest skater in the field right now,” he added. “It is interesting to see the young skaters. I wish I would have worked with a mental coach when I was younger. Maybe my career would have looked different. I would recommend to all young skaters to work on their mental strength, not only be read physically, but also mentally.”

“It was terrible and very bad,” said Kerry. “After the first mistakes happened, it got more and more difficult. I was lost sometimes during my performance. It was an ‘interesting’ experience. My next goal is putting more quads back in the program.”

With the six Grand Prix events concluded, the unofficial standings for the Men’s discipline going into the Final are as follows: