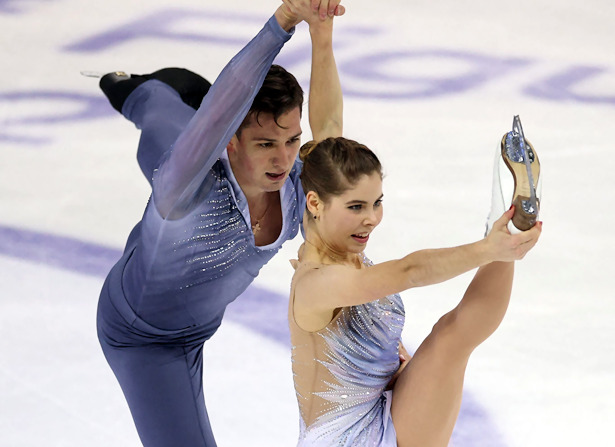 Russia’s Anastasia Mishina and Aleksandr Galliamov rose from second to capture their second consecutive Grand Prix gold for the season at 2021 Rostelecom Cup. They led a Russian sweep of the podium with teammates Daria Pavliuchenko and Denis Khodykin and Iasmina Kadyrova and Ivan Balchenko taking silver and bronze, respectively.

Mishina and Galliamov produced a near-flawless performance littered with high positive grades of execution (GOE) to “The Snowstorm” by Georgi Sviridov. The 2021 World Champions opened with side-by-side triple Salchow-Euler-triple Salchows followed by an excellent level-four triple twist. The team from St. Petersburg then nailed a throw triple Lutz, side-by-side triple toes and a throw triple loop. All three lifts received a level four, as did the death spiral and combination spin, and they scored 153.34 for first place in the free skate. With a total score of 226.98, the team moved up the podium one spot to take the gold.

“The second Grand Prix was harder for us than the one in Japan, I can’t explain why,” said Mishina. “The short program here did not work out, but we were able to pull ourselves together for the long program and it was much better. After yesterday, we were mad at ourselves and we were upset; not because we were in second, but because of the mistakes we made.”

Mishina added that before doing the program, they had watched all different versions of the Esmeralda ballet in order to tailor it for themselves.

“There is a lot of connection between ballet and Figure Skating,” said Mishina. “Maybe it doesn’t look as beautiful in figure skating because we have to execute difficult elements.”

Overnight leaders Pavliuchenko and Khodykin had a rocky start when she underrotated the second jump of the side-by-side triple toe-triple toe-double toes and then fell on the side-by-side triple toes. The 2020 European bronze medalists recovered to produce an excellent level-four triple twist, throw triple flip and triple loop, and two level-four lifts. They scored 138.68 points for second place in their “Black Swan” free skate and finished second overall with a total score of 212.59.

“We are happy we were able to project our characters,” said  Khodykin. “Compared to the first Grand Prix in Canada, we progressed as we could see with the reaction of the crowd. We’ll keep working on it.” “I feel very inspired by the movie Black Swan and want to bring across this little crazy, non-standard character,” added Pavliuchenko.

Kadyrova and Balchenko’s performance to music from Prince of Persia featured a level-three triple twist, side-by-side triple toes, and three level-four lifts. The mistakes for the sophomore seniors came on an underrotation on the back end of the side-by-side triple Salchow-Euler-triple Salchows, a fall on the the throw triple flip and the death spiral. They finished third in the free skate and overall (124.19/193.58).

“We made a lot of silly mistakes in the program and am sure it will come with the experience,” noted Kadyrova. “We’ll keep working and polishing the programs. We’ll take it from there.”

USA’s Audrey Lu and Misha Mitrofanov produced a level four triple twist, side-by-side triple Salchow-Euler-double Salchows and triple toes, a throw triple flip, and three level four lifts. The only mistake came when she fell on the throw triple loop. They finished fourth in the free skate and overall (121.19/186.16).

“We felt good and we are proud of ourselves,” said Mitrofanov. “We fought to the end.”

“We are satisfied with our Grand Prix season,” added Lu. “We gained confidence. We want to improve on our speed and flow and overall quality. Our next competition will be Golden Spin in Zagreb.”

Kirsten Moore-Towers and Michael Marinaro of Canada had a sub-par triple twist that was graded a level two and she stepped out of the side-by-side triple toes before falling on an underrotated throw triple Salchow. Two lifts were graded a level four and the 2020 Four Continents bronze medalists finished fifth in the free skate to move up two spots to fifth overall (177.72).

“We are not really happy with the skate,” admitted Marinaro, who enjoyed the ice cream he said his team leader had been eating all week.

“It is really discouraging skating bad short programs all the time, because this doesn’t reflect our daily training,” said Moore-Towers, adding that they had changed the free skate it a bit. “This is more of a mental thing.”

When asked about the upcoming Olympics, Moore-Towers said she “likes competition” and that it gives her “extra motivation.”

“We will now compete at Golden Spin and then hope to peak at nationals and hope to solidify our spot on the Olympic team there,” she said. “We hope we don’t need to go to Four Continents afterwards.”

“Overall it wasn’t our best today, but we earned our personal best, so we will leave with great memories from here,” said Magyar.

“Our Grand Prix season was full of up and downs,” added Chtchetinina. “Last week was really disappointing as we also lost a lot of levels. We improved on that here. Our biggest goal this season is of course the Olympics in good shape and to totally enjoy every second we have there. I want to create the best memories there.”

“I want to work on my mental strength,” said Magyar. “That was a bit of a problem last week. We managed really well yesterday, but today there was still room for improvement.”

“We are a little bit disappointed because of the lift, a lift costs a lot of points, but it can happen,” said Dela Monica. “We are pleased about the jumps. It was a big step forward from the last competition. We had good practices during the summer, but then something started to go wrong, so now we only came back to having good practices for two weeks.”

Della Monica wants to retire this season so that she can have a family, but Guarise would like to continue.

“Maybe she can be my coach one day,” he said.

“We feel much better than yesterday,” said Ziegler. “A lot of the stress we felt before the short program is gone, so we could enjoy it more. It was still not a good free skate. My biggest fear coming here was that we would do really bad. That happened, but it doesn’t feel as bad as expected.”

“It was what we can expect for a first competition,” added Kiefer. “It was a good step. We are not really interested in the result, obviously.”

With the six Grand Prix events concluded, the unofficial standings for the Pairs’ discipline going into the Final are as follows: