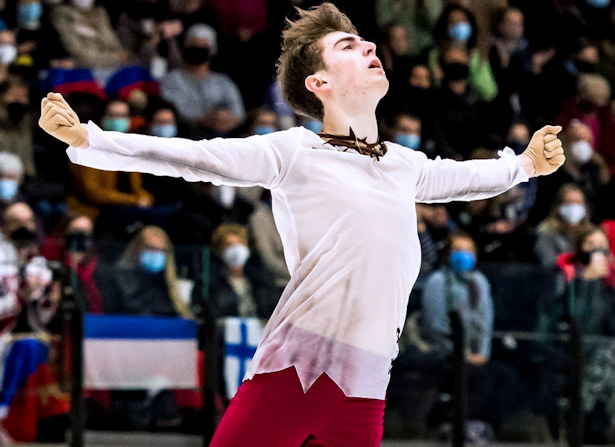 Mark Kondratiuk captured the Men’s title at the 2022 European Figure Skating Championships in his debut at this event on Friday in Tallinn, Estonia. Italy’s Daniel Grassl rose from fifth to secure the silver while Latvia’s Deniss Vasiljevs took the took the bronze.

“It’s nice I was able to be on a higher level than previously,” said the 18-year-old. “I Am so grateful to Svetlana Vladimirovna (Sokolovskaia, coach) and the whole coaching team. After six jumps I started feeling that it was going ok. The elements I did ok, the skating not so well. It was a bit tough skating today. Perhaps I am not yet in the best shape.”

It was enough. Kondratiuk finished first with a new personal best free skate of 187.50 points and moved up one spot to first overall (286.56) to claim the gold.

“That was unexpected!” he said. “I was just hoping to make the top three, like I was hoping for that at Russian Nationals. A kind of miracle happened.”

The skater from Moscow was happy with the elements but wants to show more emotions.

“As for the consistency, I can’t say much,” said  Kondratiuk. “It’s a tough matter. As for being competitive, at least I have to skate the same. I guess also to upgrade the difficulty. If I am ready for that this season, I can’t tell yet.”

Grassl, who stood in fifth after the short program, received an edge call on both triple Lutzes, but landed a quad Lutz, quad flip, and quad loop-Euler-triple Salchow. The 2021 Lombardia Trophy Champion also produced a very good triple Axel and was rewarded with a level four for all three spins and footwork in his routine to music from the Interstellar and Armageddon soundtracks.

“I’m happy with how I skated today, with the jumps and persistence, but I know I can skate much better,” said Grassl. “The component side was not like I do at the practice. I can do much more, and to compete at the world level, I really need to improve this in the free skate. The short program it is getting better. It’s improving step by step, but I want to improve much more in the free skate for the next competitions.”

Grassl finished second in the free skate with a new personal best of 182.73 and moved up three spots to second overall (274.48).

Vasiljevs slightly underrotated his opening quad Salchow and later received an edge call on a triple flip, but was otherwise solid and showed lots of expression in his “Romeo and Juliet” routine. The four-time national champion landed a total of seven solid triple jumps, including two triple Axels, and displayed level-four footwork and spins throughout. He also racked up many positive grades of execution (GOE) and took a new personal best of 181.84 for third in the free skate.

With a total score of 272.08, the 22-year-old moved up to third overall to claim the bronze—a historic first medal in this event for Latvia.

“I’m really excited, very happy, very proud!” said an exuberant Vasiljevs. “I haven’t yet grasped the total value, but the biggest pride I get today is that I came and performed my maximum. I really feel I gave 100% and that’s my biggest focus right now, not so much on the medal. I think it’s a milestone in my journey that I don’t know where it leads. I see my career and my figure skating life as a journey and I decide how I want to see myself within this community. I push myself daily, I commit my heart to that, and this result today is a reinforcement that I made right choices.”

Overnight leader Andrei Mozalev of Russia finished sixth (165.93) in the free skate, and with a total score of 265.69, slipped to fourth overall. The 2020 World Junior Champion underrotated and two-footed the landing of an intended Salchow as well as two triple Axels. However, the opening quad toe-triple toe was solid and he also earned a level four on all spins and footwork in his routine to music from the 1492: Conquest of Paradise soundtrack.

“It was a bit hard today and being in first after the short was adding the pressure,” admitted Mozalev. “I was almost able to not think about it. I think may be the European competition pressure got to me. I really wanted to do the best. I was nervous. I would love to take the mistake on the Salchow back if I could.”

Teammate Evgeni Semenenko finished ninth in the free skate after struggling with the landings of most of his jumps in his routine to music from The Master and Margarita soundtrack. The 2021 Skate Canada bronze medalist slipped to fifth (260.00) overall.

“Nervousness was there, as always,” admitted the 18-year-old from St. Petersburg. “The skating was bad, I couldn’t handle the elements. The (quad) Salchow didn’t work out and then it knocked me out a little bit.”

Semenenko was a replacement for Mikhail Kolyada who withdrew due to an injury during training.

“I found out the day after the free skating of the Russian Championship,” he said. “As soon as I found out, I started to prepare. I had to put all my efforts into the preparation, and the preparation was normal, it was good. I was thinking a little bit about qualifying for the Olympics, but I tried to abstract myself and concentrate on my skating.”

Morisi Kvitelashvili also had a sub-par skate. The 2020 European bronze medalist took a fall on a quad Salchow and slightly underrotated a quad toe to come in eighth in the free skate and sixth overall (253.91).

“Of course am not happy about today,” said the 26-year-old. “All went wrong after the fall on the first jump and then I had to fight for every element and make the calculations, and yet I missed it and added a redundant combo and got a * and lost too many points.”

“The competition was hard,” he added. “I was really tired by the end of the competition, it’s quite late, and we had about a 10-hour break when I couldn’t find what to do with myself. I wanted to just have it over. It was really tough. I was coming here all loaded. I wanted to show my best, but not all worked for me. I will try to skate better next time and prove I can do better.”