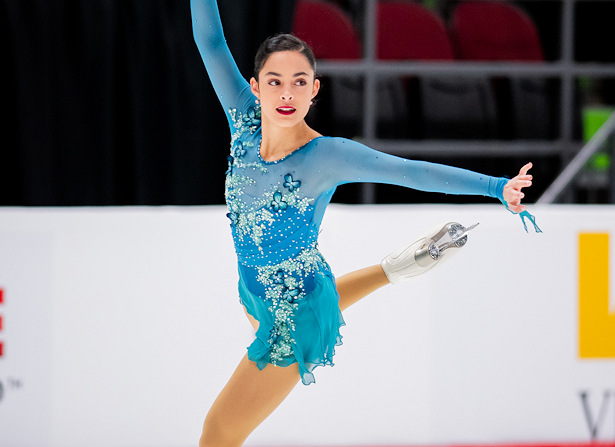 Madeline Schizas, 18, won the Canadian National Women’s title in her second appearance at this event.

While many of her challengers stumbled, Madeline Schizas eased her way to her first National Championship with elegant, sturdy performances in Ottawa, Ontario, to win gold at the 2022 Canadian Tire National Skating Championships. Veteran Veronik Mallet claimed the silver medal and former champion Gabrielle Daleman returned to the national podium with a bronze-medal finish.

“I wanted to win,” said Schizas, who was thirteenth at the 2021 World Figure Skating Championships and favored to win in Ottawa. “I came in here as sort of a front-runner, so that was my big goal.”

Helped by level-four spins and a level-three footwork sequence, Schizas earned 126.19 in the free program for a total competition score of 198.24.

Likely to be named as the only woman on Canada’s Olympic figure skating team, Schizas’ goals on her journey to Beijing are clear: “My biggest goal is to avoid catching COVID,” she said. “That’s my biggest goal for the next three weeks. I am going to do everything in my power to stay healthy. Beyond that, I would like to improve my free skate. I am going to spend some serious time drilling the elements in the free to make them more consistent.”

Schizas shared that she is now finally allowing herself to comfortably shift focus to the Olympics, assuming she will be named to the team. “It’s very much on my radar right now,” she said. “I’m a very logical person. Like realistically, one person is going to Olympics this year and the chances it was going to be me were very slim a couple years ago. So, obviously now that I won a Canadian title, the Olympics are on my radar, but I never like to get too far ahead of myself. I like to take things one moment at a time.”

“I saw the 2010 (Vancouver) Games in person, she said. “I saw Joannie Rochette skate her short program and of course that’s an inspiring moment and it’s one I will never forget. I will never forget being there and the electricity of the Olympics and just being in that environment.”

Winning the silver medal, Mallet managed four triple jumps during her routine to music from Moulin Rouge. She had an unfortunate fall at the end of her program on the second jump of a double Axel-double Axel jump series. Dressed in fiery red, Mallet maintained her second place ranking after the short program and finished the competition with 170.65 points; 111.30 in the free program.

“I was feeling really good,” said the two-time Canadian National medalist. “It was not perfect but I did what I could and I was really ready and looking forward to it and I am really glad with my performance.”

The veteran skater cherishes her first national silver medal. “It means a lot because with the last two seasons, we didn’t see anyone and there is a lot of new young skaters that are coming from junior,” she said. “I couldn’t really know where I was going to be so I am very glad with my position.”

Sentimental favorite Daleman held onto the bronze medal after a determined but problematic free skate set to Samson and Delilah which earned her 109.02 points for a total competition score of 167.50. Showcasing her signature speed and power, Daleman managed four triple jumps and three level four spins. She doubled the back end of her signature triple toe loop-triple toe loop as well as the Lutz and tumbled to the ice on her triple loop attempt.

“Disappointed doesn’t even begin to describe how I feel right now,” the two-time Olympian said after her free skate. “That was heart-shattering.”

The 2017 World bronze medalist and 2018 Olympic Team gold medalist said she was very prepared to excel in Ottawa and took little consolation from the podium finish.

Michelle Long managed to hold onto her fourth-place finish after the short program thanks to an emotive free skate set to “I Will Never Love Again” by Lady Gaga that earned her 103.76 (160.90 total score). In her seventh national championship and full of commitment to the free skate character, the 29-year-old earned her best national result. Elegantly dressed in purple, Long performed five triple jumps and a level four spin combination spin to close the program. She singled her planned double Axel and doubled a planned triple Salchow.

“I am really happy with the performance I put out there today,” the ecstatic skater said. “We changed the technical content to focus on my strengths and my performance and putting the loops and the Sals in the second half.”

Delighted by her skate, Long was in tears when she assumed her final pose. “I am emotional, so I am feeling everything right now,” she said. “I got off the ice, and I am crying. I’m happy. I’m excited. I have butterflies in my stomach right now.”

“I wanted to skate two clean programs,” she assessed. “Two pops today, not quite the program I wanted but I am so over the moon thrilled we could even have this event and I could be here and I could perform. I have never finished higher than fifth at nationals, so I have accomplished more than I could have ever imagined at this competition.”

Canadian National silver medalist in 2020 Alison Schumacher finished in fifth place with a total score of 159.36. In her free skate which earned 102.98 points, opened with a crisp triple Lutz, however, the remainder of the performance was riddled with struggled landings. Nevertheless, she showed determination through the program and managed a very sturdy triple Salchow at the half way point of the program set to the haunting, but elegant music of Once Upon a Time in the West.

“Definitely started strong off the top with the Lutz and ended strong,” she reflected. “In the middle, I had to fight, but I am happy. It could have gone worse. Overall, I am happy with the fight.”

In sixth place with 158.39 points, Katherine Medland-Spence was delighted with her free skate showcasing five triples. She earned 102.65 on the free program.

“I am really happy with how it went,” she said. “A couple of mistakes but progress from the rest of the season.”