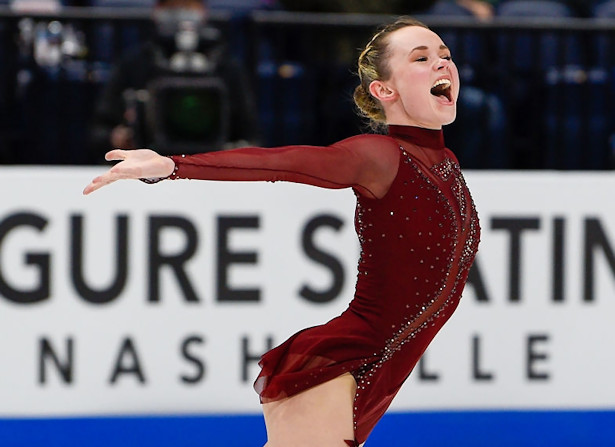 Overnight leader Bell fought through her program to “Hallelujah” by k.d. lang, putting a foot down on the landing of a triple Salchow and stepping out of the back-end of triple Lutz-double Axel sequence, but was otherwise clean. She landed a total of six triple jumps while displaying level three footwork and three four spins in her heartfelt routine. The 25-year-old, who skated a very clean Short Program, placed first in the Free Skate and overall (140.70 / 216.25) to win her first national title in her ninth appearance at this event.

“I was really fighting through a lot of it and the audience was really incredible!” said Bell. “Last year, I was pretty sad leaving Las Vegas and with everything that was going on with COVID, and that was the end of the season. I took time off and decided not to hold back. I’m proud of how I was able to keep fighting.”

“I had a connection to the music,” said Bell when asked about her program. “It makes me smile and I just love this program.”

“It’s unfortunate that this variant is really serious and people are catching it left and right,” she said of Alysa Liu, who withdrew after testing positive for COVID. “She has a great season to back her up so I don’t think she will have a problem.”

Bell feels like she’s a good long-program skater. “It was an interesting experience to be leading. To go from nationals from last year to this is really great! As I’ve gotten older, I get a lot of motivation out of things. It’s exciting to be a little bit older and showing that you can do it. I want it to be a known fact that skating doesn’t end at a certain age. I do love skating and I have individual goals and dreams and aspirations.”

“There’s a lot to say about experience and you can tap into that,” Bell added, regarding her age. “I feel like I understand my body better. I can’t train like a crazy person, and I have to be a bit more organized than when I was younger. There was a time in the summer where I felt a bit unorganized and I decided to work on the easy things I knew I could do until I got to a point where I could add things on.”

Skating to Butterfly Lovers’ Violin Concerto, Chen landed four clean triple jumps, including a triple Lutz-double toe-double loop. However she underrotated the back-end of her opening double Axel-triple toe and slightly underrotated a triple Lutz and both jumps in a triple loop-double toe. Nevertheless, the defending bronze medalist earned a level four on all spins and footwork to place third in the Free Skate (139.30). She had a clean Short Program which helped her total score of 213.85 to finish second overall.

“I’m super happy with my long program!” said Chen. “My thoughts were racing and I had to keep bringing myself back to the moment. I’m thankful we were able to compete.”

The 22-year-old feels that at the end of the day, she truly “loves skating.” “I love training and skating and being on the ice and the drive to improve.”

Chen didn’t feel the triple Axel was doable at this event.

Levito, who stood in fourth (71.00) after the Short Program, had the most difficult technical content planned of the women. The 14-year-old opened her stellar routine to “Russian Dance” from Swan Lake with a double Axel followed by a triple Lutz, triple loop, and a triple flip-triple toe. The 2021 U.S. National Junior Champion put hand down on the back end of a triple Lutz-Euler-triple Salchow, but the triple flip-double toe was clean. She finished second (139.75) in the Free Skate and third overall (210.75).

“My goal was to medal, so I’m very excited,” said an overwhelmed Levito. “I didn’t have a perfect skate but it was a good program overall. I didn’t really realize I was a senior until the medal ceremony. In the beginning I felt like I was feeling like a senior, but it was very calming or just great sense of warmth and happiness for people to see how I’m doing things.”

“I’m excited for the women who will be going to the Olympics!” she summed up.

Gabriella Izzo, who stood in seventh after the Short, took a fall on a triple flip and popped a Lutz, but landed a triple flip-double toe and triple Lutz-double toe to place fourth overall (120.60 / 188.11).

“It started out pretty well and then I lost it in the middle, but I brought it back in the end,” said the 2019 U.S. National Junior Champion. “It happens in this sport and I learned a lesson in that you have to stay in it all the way through to the end.”

Lindsay Thorngren fell on an underrotated triple Axel as well as triple flip. The 2020 U.S. National Junior Champion also underrotated a triple Salchow and triple flip but showed good level four footwork and spins in her routine to music from Queen’s Gambit. She had a very clean Short Program (70.22) and finished seventh (116.16) in the Free Skate and fifth overall (186.38).

Audrey Shin struggled with nearly all of her jumps which were underrotated with the exception of a triple flip-double toe-double loop. The 2019 U.S. National Junior silver medalist placed sixth overall (180.58).

Amber Glenn also withdrew from the event prior to the Free Skate after testing positive for COVID-19.