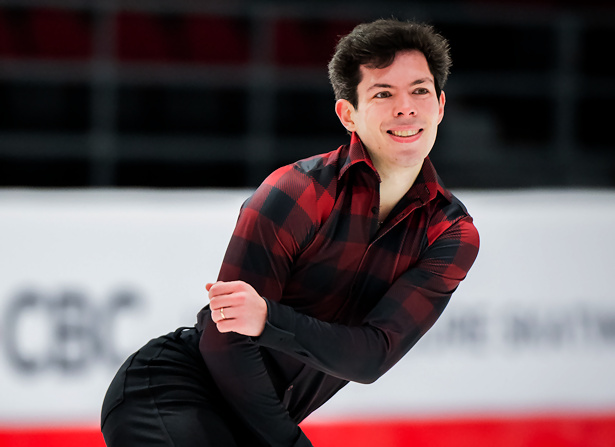 Former Canadian National silver and bronze medalist and veteran Keegan Messing finally ascended to the top of the podium at the 2022 Canadian Tire National Skating Championships. 2020 Champion Roman Sadovsky rose through the rankings to grab the silver medal while Wesley Chiu clenched the bronze.

Similar to other disciplines and the U.S. National Championships in Nashville, Tenn., the men’s competition in Ottawa was not immune to COVID. 2019 Canadian national silver medalist Stephen Gogolev withdrew when he tested positive for the virus.

“It’s an Olympic year!” said Messing. “I think I might have gotten more points if you counted the butterflies in my stomach. I forgot what it’s like to go out on Olympic qualifying ice and oh man, it’s another ball game out there. And to go out, skate and put a performance out, it was just amazing!”

Messing, who has trained and landed quadruple Lutzes in the past, indicated his programs’ technical content may improve in Beijing. “We are not done yet,” he said. “This is the beginning of the second half of the season so we are just getting started. We are keeping quad Lutz in the back of our heads. We have been training it pretty hard. I have been landing them, but I also started training them a little too hard right before Nationals, so I started developing a slight injury to my right leg but we were able to nurse it. It’s a team effort and I no longer have any kind of pain with it. I think we just have to take quad Lutz with a grain of salt and at this point, we are just pushing for the best we can be.”

The Golden Spin of Zagreb winner hinted about his future following his free skate.

“It is a very real possibility that this is my last,” Keegan said of the Nationals. “I do have it in the back of my head that I want to make twenty years of nationals. I do want to make Team Trophy next year, but I am getting a little older and depending on what happens in the rest of the season, it’s up in the air. This might be my last night, but honestly, I might have one more in me, but we will leave that for another day to decide.”

Sadovsky mustered his nerves in his free skate to “Chasing Cars” by Snow Patrol showcasing his ethereal presence, speed and unrivalled flow. Not known for his composure in competition, the 2020 Canadian Champion sat in fourth after the short program with no combination, but in his free skate, opened with a world-class, glorious quadruple Salchow and bolstered the program with a steady triple Axel-double toe loop. However, the back-end of a quad Salchow-Euler-triple Salchow was slightly underrotated as were both jumps in a triple flip-triple toe and he also doubled a Lutz. He earned a score of 170.43 in the free skate to finish the competition with a total of 247.60 points.

“Going into the skate today, I just carried a little bit of the disappointment from last night and used it as energy going into today,” Sadovsky reflected. “At the end of last night, I was on a mission to do a much better skate and just to prove that I am a better skater than what I performed yesterday and that is more or less what I did today so I am proud of myself.”

Assessing the evolution of his free skate over the season, Sadovsky is pleased.

“I think quality from a jump to jump basis, it wasn’t perfect,” he said. “I still make some mistakes, but I think quality was definitely the strongest, and from just a physical fitness point of view, I definitely felt much stronger in the second half of the program and that’s just mileage throughout the whole season.”

Chiu upset the apple cart in Ottawa. With his second-place finish after the short program, the 2020 Canadian junior champion dropped to fifth in the free skate and hung onto a bronze medal. During his routine set to “Muse,” he slightly underrotated the first quad toe, but landed the second and reeled off six triple jumps total. His only glaring error was a single Axel at the program’s half-way point.

“I am very proud of my performance tonight,” Chiu said. “It was definitely a fight for sure. There were many times the program could have slipped away from me, but I am glad I was able to keep it together.”

Chiu is ecstatic with his season. “I am very proud of how my season went this year,” he said. “Most people would say their season was like a roller coaster. Mine was like a rocket ship because it kept going higher and higher and kept getting better.”

Joseph Phan missed the podium by less than one point, finishing in fourth position at the Canadian Nationals for the third time. His third-place ranked free skate, tenderly choreographed to Miss Saigon, featured an impressive triple Axel-triple toe loop, double Axel-single Euler-triple Salchow sequence and a triple loop. However he fell on a triple Lutz and several of his remaining triple jumps were slightly underrotated. Phan earned 153.36 for his effort and finished the competition with a score of 231.50.

Phan drew last to skate in the final group of men, closing the entire competition. He admitted that the skate order impacted his performance.

“When I saw that I was skating last, I was like, ‘My worst nightmare,'” he said. “I hate skating last and I even asked Keegan in the room before competing, ‘Do you have any tips for skating last?’ And he was like, ‘I don’t because I hate it too.’ You know, everyone goes through that, skating last, and it’s just something you have to deal with. I just thought of it that I am not skating last. There is someone skating after me. That is something I thought about.”

Corey Circelli landed in fifth place with 229.61 points; 152.97 in the free skate. During his lyrical interpretation of The Nutcracker, the 2020 Junior National Champion elegantly executed seven triple jumps, some with his arms held over his head. However, he underrotated and stepped out of his planned quadruple toe loop.

“Definitely, I would have to say that for this season, for sure, that is the best I have done,” Circelli reflected. “There is nothing better than doing it at the pinnacle moment when all the marbles are on the table and stuff.”

“And it’s a big year, so that adds some extra spice,” he added. “It was super exciting. It was a really surreal moment. I have watched this event since I was a little kid. I felt like I was living in a YouTube video, so that was really cool.”

Sentimental-favorite Nam Nguyen resurrected his crowd-pleasing Beatles free skate, but struggled on many of his jumping passes and finished in fifth place. The two-time national champion fell on both his triple Axel attempts, but managed a triple Lutz, loop and flip. He earned a disappointing 130.77 points in the free skate to finish the competition with a score of 202.04.

“The skate obviously didn’t go the way I wanted it to go,” Nguyen said. “But I was very happy to be able to perform the Beatles program again in front of whatever crowd we got today and the virtual audience online. But I am kind of sad because this week I trained really well in the practices.”

Nguyen battled COVID last week which paused his pre-Nationals training. “Last week, I got COVID and it was really tough to deal with,” he shared. “I was off the ice for the full five days and I got back on the ice on Tuesday, so that was definitely a huge curveball to deal with. Obviously, I tested negative before coming here otherwise I wouldn’t be here, but it’s my lungs that I feel that’s kind of like the worst part of the aftermath of getting COVID. But all in all, I am sad to not have been able to show everyone what I am capable of. Especially with how my practices have been going since the Challenge in December. I have been on a consistent grind to be back to where I used to be, but it’s still tough.”

While the popular skater announced earlier this season that it would be his last competitive campaign, Nguyen is now backtracking. “Obviously I am very sad with what I put out this week in programs,” he said. “I wanted to finish on a really high note, however, I did say earlier this season that this could be my last season. However, I was in a different mindset back then and a lot has happened from then to now, so I am not quite sure yet what my future holds. I really do not want to leave it on such a bad note like I have done this week. But we will see what happens. If I continue, I continue. If I don’t, I don’t. But all in all I am truly happy to be here in Ottawa.”