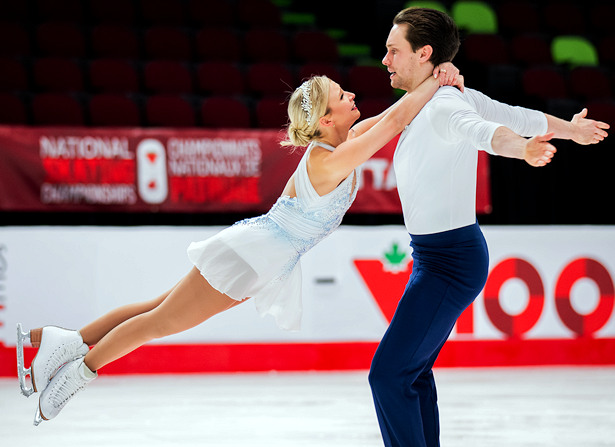 Kirsten Moore-Towers and Michael Marinaro redeemed themselves after a nightmarish international season to claim their third Canadian championship in one of the most highly-anticipated battles of the 2022 Canadian Tire National Skating Championships. Similarly, Evelyn Walsh and Trennt Michaud ‘three-peated’ as silver medalists after they, too, had a difficult international season. Deanna Stellato-Dudek and Maxime Deschamps clinched the bronze.

Vanessa James and Eric Radford withdrew on the day of the free skate to “continue their training and preparation for the remainder of the competitive season” according to Skate Canada. The new Canadian team struggled to skate cleanly in the short program after both had COVID over the holidays and lost training time.

Skating a tender and emotive free skate set to “Carry You by Rouelle,” Moore-Towers and Marinaro stealthily executed a side-by-side triple Salchow-double toe-double-loop and a sharp throw triple loop. Moore-Towers also squeaked out the throw triple Salchow but she touched her hand down on side-by-side triple toes. They scored 139.52 in the free skate for a total competition score of 212.54.

“We’re ecstatic,” said a joyful Moore-Towers. “It wasn’t perfect, but it is obviously leaps and bounds ahead of what we’ve done this season. Our objective was to stay focused on ourselves this week and with all the external noise today, I am really proud of us for being able to do that.”

Moore-Towers lamented James and Radford’s withdraw from the event: “Our goal was to go into Beijing as Canadian Champions and we wish that the whole event skated today so that we could have had that chance, but this is a mission accomplished today for us.”

“With what we have been through leading into this, for the trajectory leading into Beijing, this was mandatory for us to come out here and skate good and win,” said Marinaro. “If we didn’t do that, it would have been hard to pick up over the next couple weeks, so now that we have checked that off the list and we’re ready to just grind and build.”

“And stay COVID-free,” he added.

Walsh and Michaud delivered three level-four lifts, a throw triple loop and throw triple toe in their heartfelt skate to “Dreaming with a Broken Heart.” However, Walsh turned out the landing on the triple toe (in combination with a double toe) and the triple Salchows were called underrotated. The duo embraced in relief at the end of the performance which marked a significant improvement from their previous outings at Skate America, NKH Trophy, and Golden Spin of Zagreb. They scored 119.64 in the free skate for a total combined score of 186.52.

“We are thrilled with our performance,” said Walsh in full tears. “We are so emotional. We are really happy. We skated with our hearts and we tried to block out the outside noise going on right now because there is a lot of it and we are just really satisfied.”

The team has customarily risen to the pressure of Canadian nationals after sub-par international seasons. “We love nationals and there is a lot of pressure riding on nationals and I think we thrive on that, but going forward, we need to figure out why we always do peak at nationals and focus earlier on in the season,” said Walsh. “Because though it’s really special to us that we skated so well here, ideally we would like to do it earlier in the season.”

Michaud was pleased that the tinkering the team and their coaches did on their programs paid off in Ottawa. “We did rearrange some stuff in our program to find what was skating more comfortable,” he said. “You can really tell when you watch the top team, Sui and Han and even Mike and Kirsten, even when they are not skating the elements well, their program is still skating super well, so I think finding that comfort of what works together and figuring that out, that is what has helped us a lot. We changed a bunch of that right after Croatia and I think that was a huge help.”

“Obviously it’s a huge motivation this season, but we are trying to focus on ourselves,” Walsh said about possibly being named to the Canadian Olympic team. “I don’t think we’ve ever put focus on getting the Olympic spot. We wanted to focus on skating for ourselves, but being named to the team is the biggest dream we have ever had and we would be so, so thrilled.”

Stellato and Deschamps managed a gritty performance to “(I Just) Died in Your Arms” to finish third with a free skate score of 115.06 and total score of 178.60. Most of their high-risk elements seemed labored, likely given Deschamps’ recent return to the ice following his COVID diagnosis however, their level-four lifts were spectacular.

“We feel really happy,” Stellato said. “We fought for every element in that program so we are happy to be here.”

The team feels fortified by what they overcame to compete in Ottawa. “Because we were unable to train and just started to train this week, we can do anything under this pressure,” said Stellato. “We are fighters through and through.”

Lori-Ann Matte and Thierry Ferland finished in fourth place with their free skate “Waves” by Dean Lewis. Though third in the free skate with 116.52 points, their fifth place finish after the short program prevented a podium finish for the determined team. They finished the competition with 176.65 points. While they struggled on the side-by-side jump elements, Matte, who suffered mild COVID symptoms over the holidays, landed both throw jumps.

“We are really happy about our skate,” said Matte. “It wasn’t perfect but, for us, we saw a lot of improvement in our technical and our consistency. We wanted to end the program with a lot of strength.”

“We missed a full week, so to get back on track was a mental game and focus,” said Ferland.

Patricia Andrew and Steven Adcock rounded out the top five with a free skate score of 105.20 for a total score of 161.57.

“We felt better than yesterday,” said Alcock, referring to the team’s six-place short program finish. “The start of the program had a nice twist. The next few elements didn’t necessarily go the way we wanted, but I think we had a pretty good second half.”

“Definitely room for improvement, but overall it was not bad,” Andrew added.