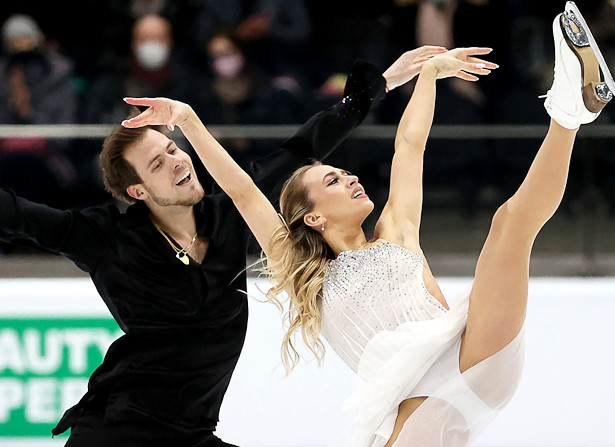 2018 Olympic silver medalists Gabriella Papadakis and Guillaume Cizeron sat out this event in order to prepare for the games in Beijing.

Sinitsina and Katsalapov were fluid and confident in their romantic dance to Sergei Rachmaninov’s “Second Piano Concerto” which featured excellent level-four lifts and twizzles. She received a level four for the one-foot steps while he was a level three and the midline steps were also graded a level three. The 2021 World Champions racked up many high positive grades of execution (GOE) and finished first in the free dance and overall (217.96).

“We are crazy happy!” said Sinitsina. “It was an amazing atmosphere in the arena and these European Championships will stay in our hearts for a very long time.”

Katsalapov had mixed feelings on the performance and felt there were things that could be improved upon, but he was still happy with the result.

“The gold medal means indeed a lot to us,” added Katsalapov. “Even though our path was different, but we never gave up. This gold medal is a big motivation for us going into the Olympics. I want to thank my amazing partner!”

Stepanova and Bukin delivered a confident performance of their passionate routine to Romeo and Juliet, displaying level-four twizzles, lifts and spin. The diagonal and one-foot steps were graded a level three and the four-time European medalists were also awarded many positive GOEs for their effort, placing second in the free dance and overall (126.75/213.20).

“We are happy!” said Bukin, noting the nearly five-point increase in the personal best score. “We made some changes to the free dance. We added speed, and frankly we are happy with today’s skate. The levels are ok, but there is still room to grow.”

“It’s our second silver medal and fifth medal overall, so it’s a great result,” added Stepanova. “We are happy with the skate, we did it all. We had a chance to work between Nationals and Europeans and we are thrilled with what we have done today. We did today more than we could a couple weeks ago. We improved and some things were changed in the free dance. We progressed so much and we are so grateful to all who helped.”

Guignard and Fabbri put out an excellent performance of their program to Atonement that was highlighted by their level-four lifts and smooth level-three footwork. The twizzles were graded a level four as was the combination spin which earned many positive GOEs. The four-time Italian National champions finished third (124.62) in the free dance and overall (207.97) two win their second European medal—the bronze.

“It’s been tough performing today,” admitted Fabbri. “Much tougher than yesterday. We didn’t have our coach (Barbara Fusar Poli) with us today, as she tested positive for Covid-19 yesterday and she is in her room. It was our first competition in 12 years without her. This was the first time in our career that we competed without our coach. It has been mentally and physically difficult, a very uneasy situation for us.”

Olivia Smart and Adrian Diaz of Spain moved up one spot to fourth overall (196.86) after finishing fourth in the free dance (118.87). Their characteristic routine to The Mask of Zorro featured very good level-four lifts, however, the one-foot steps were graded a level two while the twizzles were a level four for her and three for him. The 2021 Skate Canada bronze medalists also received a one-point deduction for a fall when there was a quick “adjustment” during the ending pose.

“This is the hardest we’ve ever worked for anything,” said an emotional Smart. “It’s not only been this competition, it has been the whole season that we gave everything we had. It will take a while until it will fully sink in, but I think it will come very soon. Regardless of what we did here, we did our job all season. Now we are exhausted.”

“It’s been a long season,” agreed Diaz, “All the Grand Prix, the Challengers.”

Great Britain’s Lilah Fear and Lewis Gibson finished sixth in the free dance after putting out an entertaining and upbeat routine to The Lion King that featured level-four lifts, but the twizzles were graded a level three. With a total score of 196.01, the 2021 NHK Trophy bronze medalists slipped from fourth to fifth overall.

“We’re really just trying to reach our goals at every competition,” said Fear. “We had a really fun time and it was very exciting to have that possibility to be in the top group and we’re very proud of what we achieved. We’re very motivated and we think we’re making big strides.”

Going into the Olympic Games, the team plans to work on the consistency of their technique which is where they feel they lost points today.

“We’re going to be really strict with ourselves,” said Fear. “We made a lot of changes which we implemented here. We wanted to showcase them, which we did more so yesterday than today when we left a lot of points on the table, so now we’re really excited to get back to work and get ready for Beijing.”

“We took out a jump because we wanted something more unique to us,” explained Gibson on changing the choreographic step sequence. “So now we do a hydro-glide, which is more fun and more ‘us.'”

Sara Hurtado and Kirill Khaliavin displayed level-four lifts and spin in their routine to music by Led Zeppelin to finished fifth (116.07) in the free dance and sixth overall (191.90).

“I felt so proud of our journey, not just this season, but how we grew to be able to skate like today,” added Hurtado. “As hard as the circumstances have been, it makes me very proud of Kirill and us.”

Diana Davis and Gleb Smolkin finished seventh (186.61) overall in their debut at this event. The highlight of their program to music from Moulin Rouge included three level-four lifts and combination spin.

“We loved it here!” said Smolkin. “The audience was great and we had so much support. There were so many Russian speakers. We skated here in the Junior Worlds and we loved it here. We then made some silly mistake in the lift, but now we did our best, especially at the end where we were lacking during the season. We have to give more, so I think we are going to the right direction.”

Smokin’s father is actor Boris Smolkin while Davis’ mother is renowned coach Eteri Tutberidze. The team wants the judges to know them for their skating and not being the offspring of “famous” parents.

“After the Russian nationals, we stopped paying attention to all that,” said Smolkin. “We let the redundant things go. We don’t mind that, it doesn’t bother our preparation. Fortunately, we are healthy and that is the only thing that might put us back. It’s the most annoying thing for an athlete not to be healthy, so we don’t mind the noise around us, we get the attention, which is a good thing. We just want everyone to like our skating.”