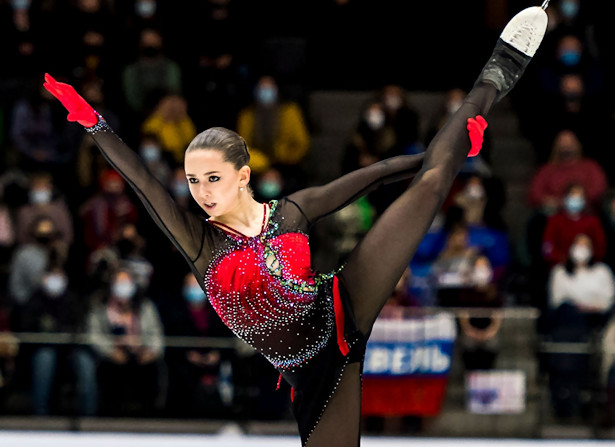 Kamila Valieva led the Women in a Russian sweep to take the title with more than 22 points to spare at the 2022 European Figure Skating Championships on Saturday in Tallinn, Estonia. Anna Shcherbakova moved up two spots to capture the silver, while Alexandra Trusova maintained third overall for the bronze.

Valieva was not perfect in the free skate, in fact, she took a fall on a triple Axel and had a slight step out on a quad toe combination which invalidated the triple Salchow. However, the 2020 World Junior Champion still landed a quad Salchow, quad toe-triple toe and four solid triple jumps in her “Bolero” routine. She earned many high positive grades of execution (GOE), as well as a level four for her footwork and three spins, to place first with 168.61 in the free skate and overall (259.06).

“Today something did not work out, something on the contrary worked better,” noted the Russian Champion, who achieve a record short program score on Thursday. “Ice is slippery and we will work on that (what did not work). Sometimes I am more nervous, sometimes less, but I have no choice, I need to go out and fight. I am very happy to be here at the European Championships with all the other great athletes. It is a great experience for me!”

“The crowd is great!” said Valieva. “We were so supported and you feel loved when you get on the ice. The skate today not all worked for me, but I will train. I tried to show more emotions, and in a way, that distracted me. I felt not totally calm, but I tried to feel calm and skate.”

The skater is in awe of USA’s Ilia Malinin’s quad toe-quad toe combination and had thoughts about trying it herself, but not until at least the end of the season.

“There is a chance to get injured, but it’s an interesting thing to try,” said the 15-year-old student of Eteri Tutberidze. “I tried only with the waltz jump between. I tried with a the triple, but just once, because the coaches said the chance to get injured is too high and we’ll leave it till after this important season.”

For now, however, the focus is on the Olympics.

“I guess it’s a dream of every athlete to be there,” said Valieva. “It’s an achievement of it’s own. To be in the Olympic village and feel the energy of all the athletes who come there with a goal, those who are not 15, but those had a long journey to the Olympics. I would love to feel that energy. In Beijing… I would love to see the Great Wall. It would be really interesting. I think everyone should see it.”

Shcherbakova, who sat in fourth after the short program, nailed a quad flip and seven triple jumps in her routine. All spins and footwork were graded a level four and the 2021 World Champion was rewarded with positive GOEs for all elements to finish second in the free skate with a new personal best score of 168.37 points. With a total score of 237.42 points, she rose to second overall.

“Place and scores after the short program were not important for me at all,” said Shcherbakova of being in fourth coming into the free skate. “I was very upset about my skating and that’s why yesterday was quite hard in terms of my thoughts. I was thinking a lot, worrying a lot, so I am very glad that today I coped with all that.”

“I guess happy emotions at the end always override everything these past couple of days, the excitement,” she summed up. “Only the most positive things remain in the end. It’s different for everyone, but I’m glad it worked out today.”

Skating to music from the popular Cruella soundtrack, Trusova landed an excellent quad flip and quad Salchow, but fell on on a quad toe and quad Lutz. The 2021 World bronze medalist also produced a total of five triple jumps and all spins were graded a level four. She finished third (159.23) in the free skate and overall (234.36).

“I am not happy with the skate,” said the Russian silver medalist. “I wanted to do it all, but only two quads worked. I was glad about the quad Salchow. It was gone for a while and now it’s back. I should have done five quads and only did four. It’s always good to have a competition, but I always compete with myself. I would like to skate two clean programs, the rest is not important.”

Loena Hendrickx of Belgium fell on both triple combination jumps, but landed a solid triple flip and triple Lutz-double toe. All spins and footwork in her routine to were graded a level four with positive GOEs and she finished fifth (131.72) in the free skate. With a total score of 207.97, she slipped off the podium to fourth place overall.

“I’m very thankful for my fourth place, but I would be happier being fourth with a better free program,” said Hendrickx, who was second coming into the free skate. “It was definitely not the skate I wanted.”

The Gran Premio D’Italia bronze medalist said she tried not to let the pressure of being second going into the free skate affect her.

“The Russian girls are really strong and I knew they would beat me, so I just wanted to skate for myself,” Hendrickx said. “But after the short program, something was new and I had to get my head around it. Now I know how to handle it in the future. I’ve had a rough time training for these Europeans. I had a lot of headaches and couldn’t handle the light and couldn’t do my jumps or spins. I had to skate for two weeks in glasses, but this is not an excuse for the free program because the short program was good.”

Poland’s Ekaterina Kurakova gave a stellar performance to “Terry Theme from Limelight” from Charlie Chaplin, landing a total of seven triple jumps, including a rare triple Lutz-Euler-triple flip. Three spins were graded a level four and the 2021 Nebelhorn silver medalist earned a new personal best score of 137.26 to place fourth in the free skate and fifth overall (204.73).

“I am so happy!” said the 19-year-old. “I was really hoping I would hit the 200-point mark and while I was sitting there, waiting, I kept chanting ‘Please! Pease!’ I wanted it so badly! I am so happy about the season’s best as well! Super super happy!

Ekaterina Ryabova of Azerbaijan landed six triple jumps, including a triple Lutz-triple toe, but the triple flip received an edge call in her routine to music from the Notre Dame de Paris. Nevertheless, the 2021 Denis Ten Memorial Challenge silver medalist earned a new personal best of 131.28 to finish sixth in the free skate and overall (196.75).

“Today I really could show the emotions and I’m happy about it,” she said of her music. “I was very sick before the competition. I was quite bad. I didn’t feel my body, but I just want to work hard and think I can skate better. I want to recover and work hard with my parents and I hope all will be ok and I can progress in the Olympics.”

Looking ahead to the Olympics, the skaters is not sure what worries her more—the COVID-19 tests or the skating.

“It’s not nice to keep bleeding from my nose,” said Ryabova. “I just want to skate well. There is that atmosphere and the village and that makes it more of a celebration than the competition and you really have to keep your head clear. It’s the nicest and the hardest.”

Georgia’s Anastasia Gubanova, who sat in sixth after the short, finished ninth in the free skate and overall (188.17).

“I’m not happy with my long program, for now I don’t know what influenced it,” she said, adding that there was no pressure for skating in the final group. “I have to think and analyze. The impressions, however, are amazing after such a competition. It’s a huge experience for me and for my future career.”