The 2022 Olympic Figure Skating Team event concluded with the Pairs’ Free Skate, Free Dance, and Women’s Free Skate on February 7, 2022, at the Capital Indoor Stadium in the Haidian District of Beijing. Team ROC maintained their overnight lead to win the event while Team USA finished second ahead of Team Japan. 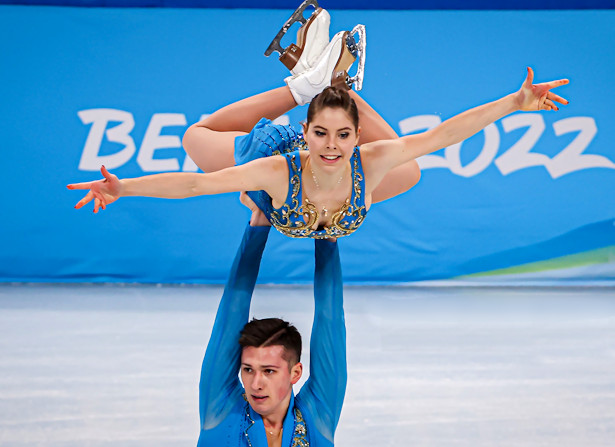 Anastasia Mishina and Aleksandr Galliamov (ROC) gave an impressive skate to “The Snowstorm” by Georgi Sviridov, landing side-by-side triple Salchow-triple Salchows, a triple twist, throw triple flip, side-by-side triple toes, and a throw triple loop. The only major error came when both skaters went down on the exit of their final lift which resulted in a two-point deduction. Nevertheless, the 2021 World champions scored 145.20 for first place to earn Team Russia 10 points.

China’s Cheng Peng and Yang Jin showed a good level-four triple twist, but she underrotated and two-footed the side-by-side triple Salchows and popped the back end of the triple toe-double toes. Another error came when there was an early exit on the group 5 Axel lift, but the 2020 Four Continents silver medalists produced a good throw triple loop and throw triple Salchow which earned high GOEs. They finished third with 131.75 points.

USA’s Alexa Knierim and Brandon Frazier started off strong with a level-four triple twist, but she singled the back end of  the side-by-side triple toe-double toes and later underrotated and stepped out of the triple Salchows and two-footed the landing of a throw triple flip. The 2021 Internationaux de France bronze medalists otherwise showed a throw triple loop and three level-four lifts, placing fifth place with 128.97 points. 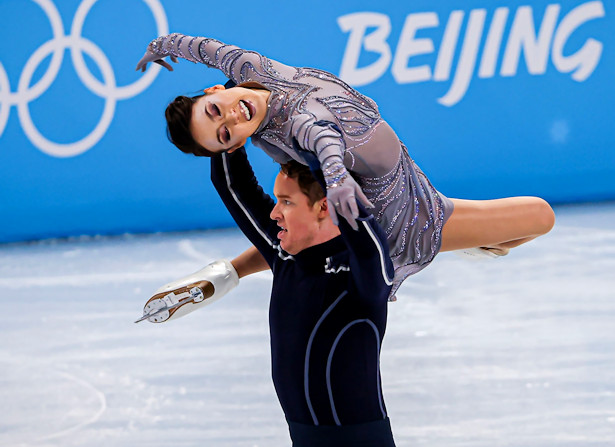 USA’s Madison Chock and Evan Bates put out a solid and mesmerizing “alien and astronaut” routine to music by Daft Punk. The 2015 World silver medalists earned many high grades of executions (GOE) for all elements including the level-four straightline-rotational lift, twizzles, and dance spin. Although the diagonal steps were only graded a level two, the team still picked up a new personal best of 129.07 points for first place.

Victoria Sinitsina and Nikita Katsalapov (ROC) received a one-point deduction for an extended lift, but their performance to “Piano Concerto No. 2” and “Caprice No. 24” was otherwise flawless. The 2021 World champions showed strong level-four twizzles and lifts, and received a level three for their one-foot steps and level two for the midline steps. They scored 128.17 points—less than a point behind Chock and Bates.

Japan’s Misato Komatsubara and Tim Koleto placed fifth (98.66) after their performance to Memoirs of a Geisha which showed good flow and featured level-four twizzles and lifts. 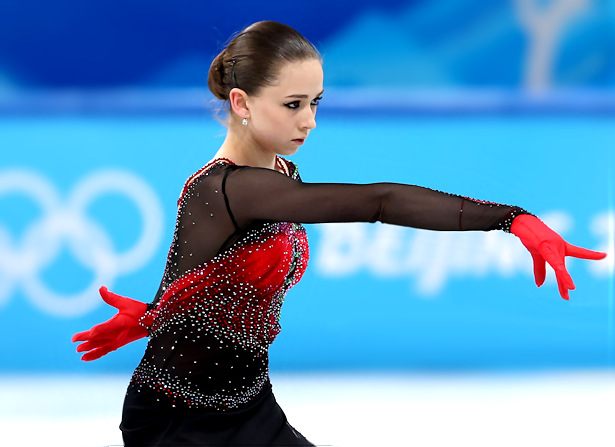 Kamila Valieva of Team ROC competes in the Women’s Free Skate of the figure skating team event during the Beijing 2022 Winter Olympic Games on February 7, 2022.

Kamila Valieva (ROC) nailed her opening quad Salchow, followed by a solid triple Axel and quad toe-triple toe in her technically-packed “Bolero” routine. The 2022 European champion took a fall on a quad toe that was underrotated, but rallied back to land four more triple jumps while displaying level-four footwork and spins. She received many high GOEs to score 178.92 points—more than 30 points ahead of her competitors, for first place.

Japan’s Kaori Sakamoto appeared calm and secure in her powerful routine to “No More Fight Left In Me” and “Tris” which featured seven triple jumps, including two triple flip combinations. She also showed very good level-four spins and the only glitch was an edge call on a triple Lutz. The 2018 Four Continents champion took a season’s best of 148.66 for second place.

USA’s Karen Chen slightly underrotated a triple Salchow and triple loop and received an edge call on a triple flip in her delicate routine to The Butterfly Lovers’ Violin Concerto.  She also put a foot down on an underrotated triple loop, but the spins and footwork were graded a level four with high GOES and the national silver medalist scored 131.52 points.

Yi Zhu of China struggled in her routine to “Sunset Boulevard,” taking two falls and putting a foot down on several jumps to finish fifth (91.41). 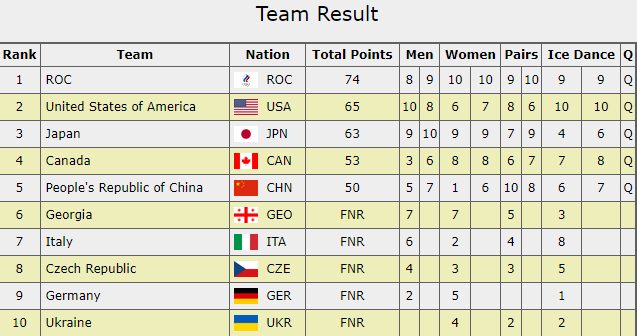 2022 Olympic Figure Skating Standings for the Team Event after Day 3.

“We are very proud of our golden team,” said Team ROC captain Nikita Katsalapov. “They all skated almost flawlessly and we supported each other. I actually would introduce a medal for each event – the Short Program and Free Skating. Thanks to the World Team Trophy in Japan, the Team Event has become popular and it gives Figure Skating special team spirit. Our sport is moving forward and this (event) gives not only us, but also the spectators, many emotions. Our task now is to take a deep breath. We all still have the individual events ahead of us and we will prepare.”

Evan Bates, co-captain of Team USA felt that the silver medal was something to be “incredibly” proud of.

“It’s the highest finish ever for our country in the history of this event,” he pointed out. ” We’ve been lucky enough to sit in the box for every one of those events to cheer on our teams. This year, knowing that we would get the chance to participate was a big deal to us. We hope this team of skaters will inspire the next generation of American skaters. There were a lot of really memorable performances and we were thrilled to be able to contribute today by skating the best we possibly could.”

Tim Koleto, the Team Japan co-captain, relayed that it was a huge honor to share the ice with “these amazing athletes.”

“The last two times we came fourth,” he said. “We were not able to take the medal and I think it is due to our strength in all categories and the improvement of our amazing Pair team and our fantastic single skaters that we were able to climb in the rankings. The Team Event is a great motivator for countries to continue to put energy and time into all the categories. We feel so supported and so excited for the future of Japanese Figure Skating.”