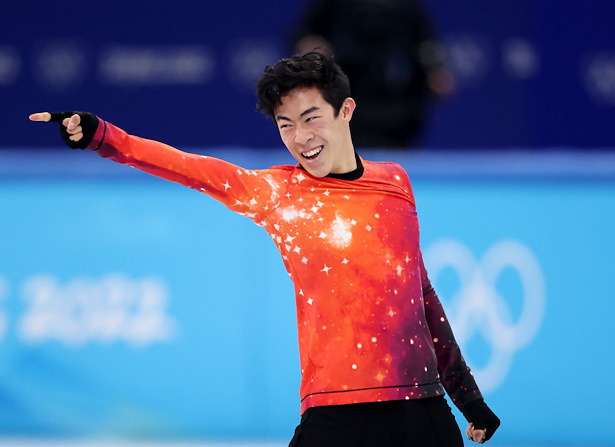 The Men’s Figure Skating for the 2022 Winter Olympics concluded with the Free Skate on February 10, 2022, at the Capital Indoor Stadium in the Haidian District of Beijing. USA’s Nathan Chen held on to the lead after the Short Program and won the gold with over 22 points to spare in what proved to be an exciting event. 2021 World silver medalist Yuma Kagiyama of Japan earned the silver in his debut at this event, while teammate Shoma Uno pocketed the bronze.

Skating to his “Rocket Man” routine, Chen nailed his opening quad flip-triple toe and quad flip, but fought for the landing on the quad Salchow. The three-time world medalist went on to land a solid quad Lutz, but popped the back end of a quad Lutz-triple toe after displaying excellent level-four footwork. Nevertheless, two spins were graded a level four and three clean quads were rewarded with many high grades of executions (GOE), and he finished first in the free skate and overall (218.63/332.60).

“I’m glad I was able to do what I needed to do to win,” said Chen. “Of course, I’m still thinking about that toe flip. I kind of rushed it a little bit and went kind of forward on that, so I couldn’t pull out the triple flip. But overall I was happy I was able to pull out the triple Axel after that. The rest of the program was pretty solid. I had a little struggle on the Sal(chow). Throughout the past two weeks, but also two minutes before I skated, the triple Sal(chow) felt really off, so I was a little worried about that. But I was happy to make that happen, and the rest felt great.”

“Truly I’ve never imagined I could make it this far,” said the 22-year-old, who confessed to being nervous. “I need to take a little more time to process everything. Of course, there are certainly many things I could have done better, but overall I was very happy I was able to do the program that I put down. It means the world. I’m just so happy. It’s a whirlwind right now. I had a blast out there!”

The skater plans to go back to school in August and is not sure yet of his future plans in figure skating.

Kagiyama opened his routine to Gladiator with a solid quad Salchow, but stepped out of slightly underrotated quad loop. The 2021 World silver medalist rallied back with a very good quad toe, quad toe-Euler-double Salchow, and four clean triple jumps. He earned a level four on all footwork and spins, racking up GOEs along the way, and finished second in the free skate with a new personal best of 201.93 points and maintained second place overall (310.05).

“I was a little bit nervous, so it didn’t go as well as the team event,” admitted the 18-year-old from Yokohama. “But I am still grateful that I did what I could in the middle of it and delivered a good performance after all. I am very happy to get silver and very proud to have done this representing Japan.  It is an award granted to all my effort over the years. It will definitely lead to better experiences in the future.”

Uno landed a quad loop, quad toe-double toe, and two triple Axels, but his skate to “Bolero” wasn’t clean. The 2018 Olympic silver medalist two-footed the landing of a slightly underrotated quad Salchow, took a fall on a quad flip, and turned out the landing of a quad toe. Despite the mistakes, the skater stayed in character until the end, producing excellent spins and footwork which were rewarded with positive GOES to finish fifth in the free skate (187.10). With a total score of 293.00, he easily maintained third overall to stay on the podium.

“Rather than having regrets, I am focusing on how to improve from now on, how to perfect my performance,” said the 24-year-old. “I failed in the second and third jump. I guess I did get nervous, but I thought I must do as much as I can in the second half. I have the world championships coming. I believe I’ll deliver an even better program then. I failed, I won, I raced so much in the past four years, and today’s performance is where those past performances got me, and is where I will strive for better results.”

“I am very happy with this result,” Uno added. “If I had another chance, I would probably finish the same way. It was a good experience. I believe it will lead to greater ones. With these experiences, I will be able to perform the beautiful program Nathen Chen did.”

Reigning and two-time Olympic champion Yuzuru Hanyu of Japan finished third in the free skate (188.06), but two falls proved to be costly for the skater who sat in eighth place after the Short. He fell on an attempted a quadruple Axel and the next jump, a quad Salchow, but the rest of his routine to “Heaven and Earth” was solid and featured a quad toe-triple toe, quad toe-Euler-triple Salchow, and four clean triple jumps as well as very good level-four spins and footwork. He finished fourth overall with 283.21 points.

“No matter how hard no matter how unimaginable, I want to push a little bit more for those who have expectations in me,” said the 27-year-old. “I think I am pushing the boundary today. I do the quad Axel much better now. I failed to realize my dream of completing it in this Olympics, but I have worked really hard for it.”

“It was a hard time for me on the ice,” Hanyu added. “If I didn’t do the quad Axel, I could have done a better combo, but that (attempt) was my pride. It’s going to make me more complete. That’s why I did it. Pressure gets me more energy for skating.”

South Korea’s Junhwan Cha took a fall on his opening quad toe, but landed a solid quad Salchow along with six clean triple jumps. The 2022 Four Continents Champion showed very good level-four footwork and two level-four spins in his routine to Turandot, placing seventh in the free skate with a new personal best of 182.87 points. With a total score of 282.38, he finished fifth overall.

“It was actually incredible for me today,” said the 20-year-old from Seoul. “I had a big mistake on my first jump, but I really fought until the end and I think I really managed well until my program finished. It is the Olympics, so my goal was to try and enjoy the moment.”

USA’s Jason Brown earned a new personal best of 184.00 points for sixth place in the free skate and overall (281.24). The 2020 Four Continents silver medalist gave a solid and moving performance to music from Schindler’s List, landing seven clean triple jumps, including two triple Axels. The superb spins and footwork were well-rewarded with very high GOEs and the skater earned the second highest program component score of the event.

“I’m just so grateful,” said Brown. “It’s been eight years (since he last competed at the Winter Olympic Games) and I have given it everything. I’ve had to get back on this stage and to be able to perform. I’m just so proud to be back and be able to put in two performances like that.”

“It’s hard to skate at the Olympic Games,” he added. “Obviously it’s very hard to make an Olympic team. Then when you’re here and you’re on the biggest stage, it’s something I love and have dreamed about and worked towards and you’re trying to convince your mind that it’s just another day.”

Daniel Grassl of Italy received an edge call on his opening quad Lutz and underrotated the backend of a triple flip-triple toe, but was otherwise clean. The 2022 European silver medalist produced a quad flip, quad loop-Euler-triple Salchow, triple Axel, and triple Lutz-triple toe while displaying level four spins and footwork through his routine to music from Interstellar and Armageddon. He finished fourth in the free skate with a new personal best of 187.43, and rose from 12th to seventh place overall (278.07).

“I was very happy that I could perform how I wanted,” said the 21-year-old. “It’s like probably the best of the season this free program, and I am very happy how I tried. I will take away a lot of experience. I realized I can manage these big events. I was able to control my nerves. I am very happy with my performance in the Olympics, it’s such a big event!”

Evgeni Semenenko (ROC) fought for the landings of several jumps in his routine to music from The Master and Margarita, but managed a clean quad Salchow and quad toe-triple toe. The 2021 Skate Canada bronze medalist still scored a new personal best of 178.37 to finish ninth in the free skate and eighth overall (274.13).

Boyang Jin of China finished eighth (179.45) in the free skate and climbed from 11th to ninth overall (270.43). His program featured a very strong quad Lutz, as well as a quad toe-double toe, and quad toe, but two-time world bronze medalist fought for the landings several jumps.