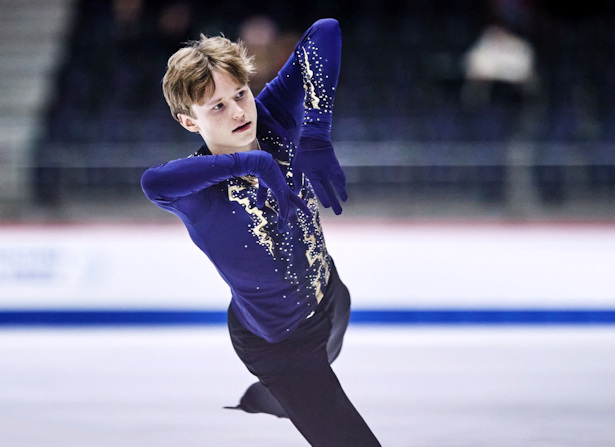 USA’s Ilia Malinin maintained his lead to win the Men’s title with nearly 42 points to spare at the 2022 World Junior Figure Skating Championships. Mikhail Shaidorov of Kazakhstan soared from eighth to second to capture the silver, while Japan’s Tatsuya Tsuboi rose two spots to claim the bronze.

With the exception of a foot down on the landing of his opening quad Lutz, Malinin was otherwise solid in his routine to “Nobody Knows” and “Golden Age.” The 2021 Cup of Austria bronze medalist produced a clean quad toe, quad Salchow, quad toe-Euler-triple Salchow, and five more triple jumps. Two spins were graded a level four and all elements, except for the quad Lutz, received positive grades of execution (GOE). He scored a new personal best of 187.12 and a total personal best score of 276.11.

When asked if he felt if the win at this event was important to show that his silver medal at nationals wasn’t a fluke, he replied: “It was definitely to show that I have started working on consistency and trying to skate clean every competition. After Worlds, I noticed that I need to have more improvement in my jumps and just being able to do them in the program. So we worked on that and it showed up here, so I’m really excited about it.”

While the skaters didn’t need four quads in his free skate to win, he decided to stick with the plan.

“We intended that if I can start doing well with four quads, then next season we can add more,” Malinin explained.

The top three skaters were asked which skater they admired the most and why, and it comes as no surprise that Olympic Champion Nathan Chen is Malinin’s choice.

“He definitely inspired me and he showed he’s been really consistent these past few seasons,” said Malinin. “It’s motivating me to try and also be as consistent as him and to try not to mess up as much.”

Shaidorov underrotated his opening quad Lutz and received an edge call on the front end of a triple flip-double toe, but was otherwise clean. His routine to Once Upon a Time in America featured a clean quad toe-triple toe, quad toe and four more clean triple jumps. Two spins were graded a level four and the 2021 Junior Grand Prix (JGP) Baltic Cup silver medalist posted a new personal best free-skate score of 159.17. With a total of 234.31 points, he rose from eighth to second overall to become the first skater in any discipline from Kazakhstan to win a medal at this event.

“I’m very happy with the result,” said Shaidorov, who kept it brief due to a headache. “I did my maximum. We had a very difficult preparation for this competition as I had to skate on public sessions, but I was able to deal with the situation and I’m satisfied.”

Shaidorov looks up to two-time Olympic Champion Yuzuru Hanyu. “He has been showing great results over a long period of time and his light jumps and skating really inspire me.”

Tsuboi slightly underrotated his opening quad Salchow and put a hand down on the front end of a triple Lutz-Euler-double Salchow, but otherwise landed five more clean triple jumps. The 2022 Bavarian Open Junior Champion earned a level four on two of his spins, but the footwork was graded a level two. Nevertheless, he scored a new personal best of 154.67 for both his free skate and total score (233.82) to move up onto the podium.

“I feel very happy that I reached the podium at the World Junior Championships,” said Tsuboi, who will compete at the senior level next season. “I feel like I have learned a lot from this experience and I am looking forward to using this for the next season.”

Tsuboi also admires Hanyu. “He integrates his jumps into his programs. He expresses the music well and he also challenged himself to do the quad Axel, something nobody has ever done successfully, at the Olympics. I really admire his courage.”

Wesley Chiu of Canada struggled with four of his jumping passes which included a fall on a quad toe in his performance to Muse’s “I Belong To You.” He was only able to manage a triple flip and triple Axel, but earned positive GOES for his level-three footwork and two level-four spins. The skater, who won both of his JGPs this season, finished fourth in the free skate (146.70) and slipped to fourth overall (228.29).

Teammate Stephen Gogolev doubled a quad Salchow, stepped out of a triple flip-double toe, and slightly underrotated a triple loop in his routine to music by Peter Gabriel. However, the 2018-19 JGP Final Champion landed a quad Salchow-double toe and four clean triple jumps. He also earned a level four on two spins with positive GOEs and finished fifth in the free skate (145.74) and overall (224.49).

Estonia’s Mihhail Selevko landed a quad Salchow and four triple jumps, but took a fall on both triple Axels and underrotated a triple flip to finish ninth in the free skate. With a total score of 218.68, the 2022 Challenge Cup silver medalist slipped off the podium to sixth place overall.

Italy’s Nikolaj Memola, who stood in 10th after the short program, finished sixth (141.52) in the free skate and moved up to seventh overall (212.94). His routine featured six triple jumps as well as two level-four spins and footwork.