I guess ill have to wait till nbcsn starts in an hour to watch Nathan's fs. *sigh*
1

Joe Mendoza said:
I guess ill have to wait till nbcsn starts in an hour to watch Nathan's fs. *sigh*
Click to expand...

I mean... I can upload the ISU version for anyone interested.

Gilligan said:
Can anyone say something reassuring about his Russian vocabulary?
Click to expand...

Raf said молодец and хорошо (well done, good) to him after his SP at 2019 GPF:
https://www.instagram.com/p/B5tJuA_JuhX/?igshid=m2crghv14wrn

Since these are really basic words I wouldn’t call them reassuring evidence, but it’s kinda cute that Raf would speak to him in Russian when he’s excited

ETA: Mariah mentioned in a 2019 interview that Raf speaks a lot of Russian during training sessions, some of which she might not want to know

I watched (most of) the WTT men's event with a friend, who doesn't follow figure skating (only whenever I make him watch some of it with me

). So he's pretty unbiased and doesn't really know much about it, except for some of the technical stuff and judging system that I told him about.
(and btw, he doesn't think it's oh-so-difficult to understand...

And after Nathan's skate he asked me to rewind to his camel spin and pointed out to me, that Nathan was the only skater who didn't go into an awkward and ugly looking position while trying to grab his blade. And that he initially assumed that it's apparently normal to do so, because every other skater did it, and he thought it was really weird and noticeable, until he saw Nathan do it differently.

That really made my day, since that has been a long time pet peeve of mine (as I've pointed out multiple times in these forums), and I was really proud of him for noticing that on his own!

Plus, with everyone always picking at Nathan's spins, it's kind of amusing that a casual observer like him would notice a positive feature about Nathan's spins 'of all things'.

He also said, that he liked it, that Nathan's free skate costume was so flowy. And guess what, he did not complain about it being 'boring' and black, despite the fact that he personally enjoys bright colours and ombre colour gradients a lot (he was really into Roman's top, lol).
E

Random thoughts on Nathan’s FS: I agree that he looked a bit tired after practice. I think the short turnaround time between Worlds plus the air travel had an impact on him (and other skaters as well). Considering everything, it was a pretty good performance. We just expect so much from Nathan, but, all in all, lovely. His arm movements at the beginning of his skate and in the step sequence seemed more nuanced than in his FS at Worlds (and I love, love, love his performance at World’s). I’m glad he completed the two 3As - I’m wondering if that was more for practice/increased comfort level than a strategy for future competitions. I didn’t see the “q” on the 4T3T, but sometimes I don’t pick up on that stuff. Will someone with a better eye for that stuff than I, let me know what they think? Next season will be a pressure cooker for Nathan – especially being undefeated since the Olympics. I hope he remembers to just enjoy every moment.

I don't see the q either. I thought it he landed backward and there was no turning of the blade on the ice. I actually thought it was a pretty good landing with a nice running edge and his upper body was upright and reaching back for his 2nd jump (better than his usual landings where his upper body tends to be forward).
J

1111bm said:
I mean... I can upload the ISU version for anyone interested.

Would love an upload of the Worlds FS I live in constant fear that any of the links will stop working. There was a BBC event review with more beautiful compliments from Robin Cousins that disappeared from YouTube.
1

lurkz2 said:
Would love an upload of the Worlds FS I live in constant fear that any of the links will stop working. There was a BBC event review with more beautiful compliments from Robin Cousins that disappeared from YouTube.
Click to expand...

Sup everyone, long time no see

Haven’t been here in like a year so gonna catch up on the thread soon but I see that my boy has gone undefeated for 3 years now? So proud. Excited for the Olympic season, I’m confident it’ll be his best yet. Now to scour through everything I missed, hopefully the links work still
S

Team USA awarding themselves their medals

Haven’t been here in like a year so gonna catch up on the thread soon but I see that my boy has gone undefeated for 3 years now? So proud. Excited for the Olympic season, I’m confident it’ll be his best yet. Now to scour through everything I missed, hopefully the links work still
Click to expand...

Ah, hi, heyheyhey, what a pleasant surprise!! I was thinking of you this week. As a matter a fact, your optimism is dearly missed every time when I’m stressed about him.

I don’t want to sound over dramatic, but I really miss you, oatmella and skfan so much.
B

videos of Nathan cheering for teammates

— Nathan Chen's majestic performance at the World Team Trophy − he skated like a whirlwind.
Click to expand...

It’s too bad that Friday was most likely the last time Nathan Chen will skate the free program Shae-Lynn Bourne artfully choreographed to selections from the music of the minimalist composer, Philip Glass.

Chen clearly had a physical as well as intellectual understanding of Glass, having studied his music at Yale and having learned how to play part of it on the piano. The skater’s interpretation got more nuanced each time he performed it, with the final half of the four minutes at the World Championships and the opening 30 seconds at World Team Trophy clear evidence of how he “got” the music.

It brought him a third straight world title and fifth straight U.S. title.

This was my favorite free skate of the five Chen has used in his five years as a senior international competitor. He has also used five different short programs.

Chen began his senior career with a pair of classical warhorses, from Le Corsaire and the Polovtsian Dances, but he has been all over the musical landscape since: moody contemporary, upbeat Elton John, Latin, pulsating Stravinsky. And as he has eschewed the comfort of familiarity (and repetition) for the challenges of stretching himself artistically, Chen has also filled those programs with the most stunning array of quadruple jumps in history. He did four more quads Friday, two in combination.
Click to expand...

Collection of some nice pictures from the free 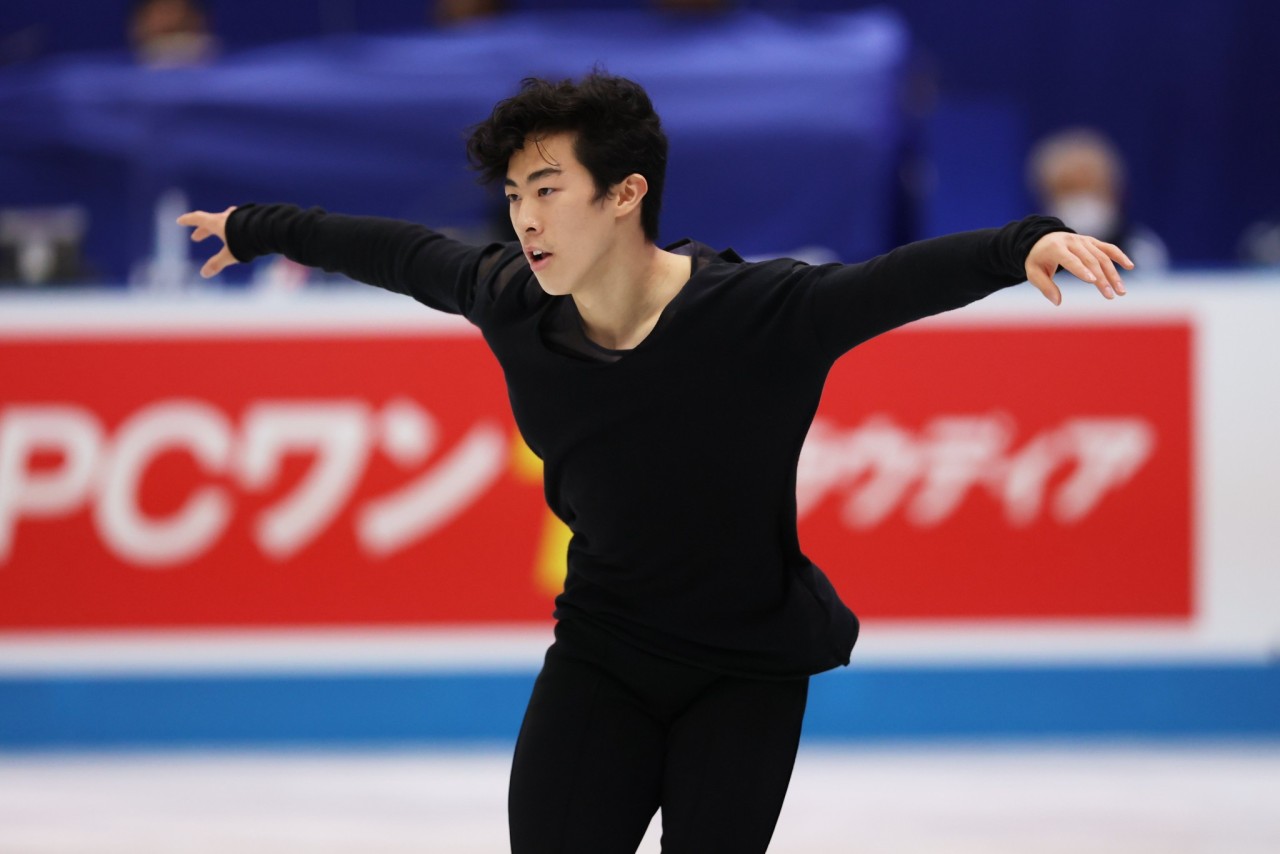 bonita said:
Ah, hi, heyheyhey, what a pleasant surprise!! I was thinking of you this week. As a matter a fact, your optimism is dearly missed every time when I’m stressed about him.

I don’t want to sound over dramatic, but I really miss you, oatmella and skfan so much.
Click to expand...

Thank you! I missed all of you, 2020 as you know was crazy so I honestly didn’t have time to catch up with anything sports but I’m starting to get back into it. Seems like there were many cancellations in terms of competitions so I probably didn’t miss too much in that aspect but I’m just glad to see our boy is thriving, not that I ever doubted. I’m sure Raf was happy to have him home full time finally.

I’ll be around often now, it is off season officially so maybe we can have one of those summers where we spend a 100 pages stressing about whatever outfit Vera is gonna put him in next for the Olympics and dissecting yet another blunt Raf interview

According to those who watched Gala practice Nathan included 4T+1Eu+3F in his Rocketman run thru. He is doing the Caravan steps for encore.
G

https://twitter.com/hitsuji_one/status/1383287041949978624
according to google translate, Nathan did that combo, and then Hanyu did the same combo on the opposite side of the rink? Then Nathan gave Hanyu a thumbs up?

LOL are they actually having an impromptu quad battle during gala practice? Or at least showing off? Maybe that's why only Team Japan and Team Russia have a team gala number (according to the skate order). No gas left in the tank for some team USA members?

Hoping he'll be blessed with good health and *won't* be doing this at 2022 US Nationals, when the gala will be a few hours after the end of the men FS during an Olympic year.
Last edited: Apr 18, 2021

I think Nathan was just practicing it since he put the 4T1Eu3F into his gala performance. Probably mad at himself for messing it up. He did it perfectly today though.