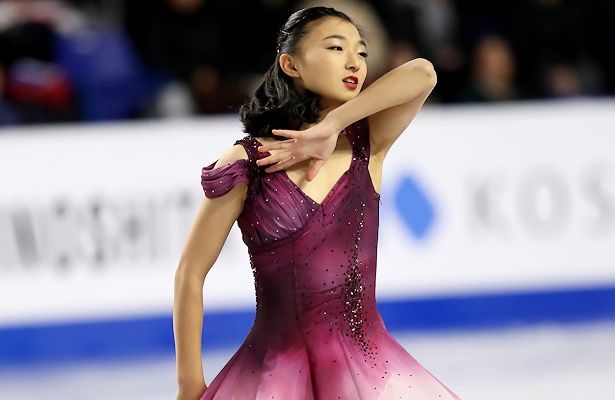 Kaori Sakamoto performs to “From My First Moment” by Charlotte Church in her 2018-19 Short Program.

Kaori Sakamoto edged out Rika Kihira to claim her first national title at the 2018-19 Japanese Figure Skating Championships on Saturday night in Osaka, while Satoko Miyahara earned the bronze. With the top five medal contenders all having either one or more medals from Four Continents, the Grand Prix Final, or the World Championships, the ladies’ competition at this event was expected to be a tight race. All three ladies had qualified for the 2018-19 Grand Prix Final earlier this month with Kihira winning the gold.

Last year, Sakamoto placed second at the 2017-18 Japanese Nationals and earned a berth to the 2018 Four Continents Championships and the 2018 Winter Olympics in Pyeongchang, where she won the gold medal at the former. In her sophomore season, Sakamoto returned as a serious contender for the gold medal after a fourth-place finish at the 2018 Grand Prix Final in Vancouver. With a clean “Charlotte Church” short program by David Wilson which consisted of a triple flip-triple toe, a double Axel, and a triple loop, the 18-year-old from Kobe followed closely behind Miyahara with a score of 75.65 for second place.

Sakamoto then pulled off a near flawless free skate to the enchanting piece to music from The Piano choreographed by Richaud Benoit.  The Skate America silver medalist completed a triple flip-triple toe, a double Axel, a triple Lutz, a double Axel-triple toe-double toe, a triple flip-double toe, and a triple loop. Although her triple Lutz received an edge warning and negative grades of execution (GOE) by two judges, Sakamoto earned positive GOEs and level fours on all her elements to score 152.36, giving her a total of 228.01, a victory of roughly four points.

After her victory over Olympic Champion Alina Zagitova at the Grand Prix Final two weeks ago, Kihira came into this competition surrounded by a lot of buzz and spotlight. However, the sixteen-year-old admitted to the media that she had been struggling with boot issues after the Grand Prix Final, and a fall on her opening triple Axel in the short program put her back in fifth. High quality execution of her triple flip-double toe combination, triple Lutz, all her spins, and her step sequence kept her in medal contention with a score of 68.75.

In her free skate to “Beautiful Storm,” choreographed by Tom Dickson, Kihira came back with a powerful performance befitting of the music. Her score of 155.01 was the highest free skate score of the night, but with a total of  223.76, the skater was only able to manage second overall. Her opening triple Axel-triple toe received 2.63 points for GOE for a whopping total of 14.83 points alone. Her second triple Axel was just as clean as the first, receiving 2.4 points for GOE. The remainder of her program consisted of a triple loop, a triple Lutz-double toe, a triple flip, a triple Lutz-Euler (downgraded)-double Salchow, and a triple Salchow.

After an uncharacteristic showing by Miyahara at the 2018 Grand Prix Final, the four-time national champion rebounded on Thursday night to lead the pack with a short program score of 76.71 points. Miyahara received all positive GOEs and level fours on all her elements, which included a triple Lutz-triple toe, a double Axel, and a triple loop as she showed a return to her usual strong competition form. The judges were clearly impressed with her quality of skating skills and mature elegance with her routine to to Abel Korzeniowski’s “Song for the Little Sparrow.”

For the free skate, Miyahara performed a bold and passionate rendition of “Invierno Porteno.” The quality and completeness of her skating was reflected in her program component score of 75.09, the highest of the night. However, a doubling and a step out of her planned triple flip and an under-rotation call on her double Axel-double toe-double loop combination dropped her to fourth place in the free skate and kept her from retaining her position at the top of the podium. She finished fourth in the free skate (146.58) with a total score of 223.34.

Mai Mihara once again showcased her consistency on Thursday night with a clean short program of a triple Lutz-triple toe, double Axel, and triple flip to the whimsical sound of “It’s Magic” choreographed by David Wilson. With a score of 72.88, the 2018 Four Continents silver medalist entered the free skate in third place. Skating to the delicate and angelic “Gabriel’s Oboe,” Mihara cleanly executed a triple Lutz-triple toe, a double Axel, a triple loop, a triple flip, a double Axel-triple toe, a triple loop-double toe-double loop, and a triple Salchow and received positive GOEs on all of her elements. With a score of 147.92, Mihara placed fourth overall with a total score of 220.82.

Earlier this season, Wakaba Higuchi was forced to withdraw from her second Grand Prix assignment (Rostelecom Cup) due to a developing stress fracture in her foot. The 2018 World silver medalist noted before the competition that while she had not completely healed, she had recovered enough to prepare for this competition without pain for most of her jumps. For the short program, the 17-year-old performed a confident and lively program to the unique music of “Energia.” Although her solo triple flip element received an edge warning from judges, her energetic performance earned her a score of 72.63 that put her in fourth place going into the free skate. However, several mistakes during her free skate to “Four Seasons,” including a fall on her triple Lutz-triple toe combination, kept her off the podium. She scored 125.00 in the free skate for a total score of 197.63 and finished in fifth place with a mere 0.49 points over Mako Yamashita.

Kihira was not the only one to attempt triple Axels in the ladies’ competition. Her training mate, 23-year-old Ayaka Hosoda, also executed two clean triple Axels, both of which received positive GOE. This feat launched Hosoda to her first top-ten finish at nationals after missing out on qualification for the free skate last season.

Kihira, Mihara, and Sakamoto were named to the Four Continents team.

Kihira, Miyahara, and Sakamoto were named to the World team.