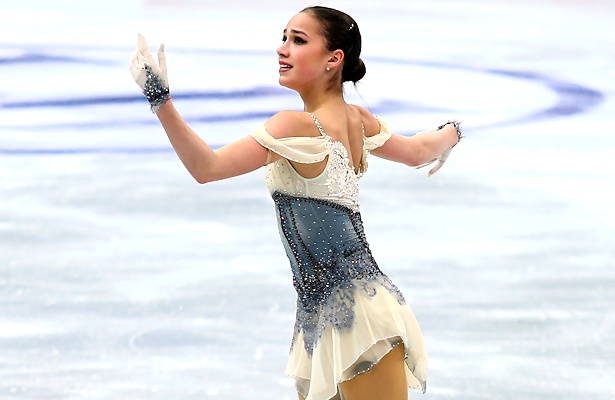 Zagitova was focused in her routine to The Phantom of the Opera, but still made a few minor mistakes. The 2018 Olympic champion underrotated the back end of her triple Lutz-triple loop, but landed a strong double Axel and triple flip. All elements were graded a level 4 in her and her straight-line footwork earned many positive grades of execution (GOE) from the judges. She scored 75.00 points—several points off from her season’s best of 80.78 at Rostelecom Cup earlier this season.

“I held back my emotions and I will do that until the free skating,” said the 16-year-old. I need to be confident in myself.”

Coming off Russian nationals, where she placed fifth, the defending champion said she was leaving everything that was “bad” behind in the year. The skater wanted to prepare for this event, and had worked on all her elements, as well as their execution, for both routines.

“If something doesn’t go so well, I’ll start the new year fresh,” said the 2018-19 Grand Prix (GP) Final silver medalist. “That’s what I did. I only take the good things with me. After Russian nationals, my parents took away my phone and gave me another one, without internet, so I’m now reading books and I’m studying for school. Studying is important [as] I won’t do figure skating for my whole life.”

Samodurova, who is make her European debut, skated a clean program to “Nyah” from the Mission: Impossible 2 soundtrack. Her routine featured a triple flip-triple toe, triple loop, and double Axel. All her elements were also graded a level 4 and the 2018 Rostelecom Cup silver medalist earned a new season’s best of 72.88.

The result came as a surprise for the teen who placed fifth at the 2018-19 Junior Grand Prix Final, who was also thrilled that she was wished “good luck” by renowned coach Tatiana Tarasova.

“Today, I showed everything I’ve been working for the whole training session,” said the 16-year-old, attributing her new season’s best since the GP in Moscow to hard work. “Right now, I feel as if I’m still dancing on the ice, so I suppose I just need some extra time to calm down.””However, I’d like to mention that there’s no such a thing as competing with other girls as I always do my best only to work hard and show excellent results,” said Samodurova. “The support is so overwhelming, so I’d like to give thanks to the lovely audience as well!”

Paganini landed a triple Lutz-triple toe, triple loop, and double Axel in her routine to “Yo Soy Maria” by Astor Piazzolla, earning a new season’s best of 65.64 since her last outing at 2018 Rostelecom Cup where she finished fourth. The 17-year-old earned level fours on all other elements, but her final combination spin did not have a change of foot position.

“To prepare for this competition, I really focused on getting levels on my individual elements in order to maximize my score,” said Paganini, who placed fourth earlier this season at the 2018 Rostelecom Cup. “We also really worked on the transitions between my elements. Overall really happy with my performance. I actually was nervous, but tried not to show it. Before I started, I was telling myself little things I need to remember to perform my program properly.

“There’s definitely little things, like in the transitions and spins,” the two-time Swiss national champion said of things that could have been improved. “I know they could have been faster. A couple of transitions were a little bit (off), I took some stuff out. I was a little bit off the music so I can work on that, but other than that, I’m fairly happy.”

“It as definitely a first for the short,” said Paganini on skating last. “It was different for me. Almost every place, but first you take your skates off and you walk around a bit and put them on. It just depends on how long you walk around for.”

Viveca Lindfors of Finland came in a close fourth with a new season’s best of 65.61, showing improvement since her outing at her solo GP event in Helsinki where she finished eighth. Her routine to “Wishing You Were Somehow Here Again” featured a solid triple Lutz-triple toe and double Axel, but turned out the landing of a triple flip.

“I enjoyed myself skating today and I am really happy and pleased with how I skated, especially because my preparation wasn’t optimal due to a back problem,” said the 19-year-old. “This didn’t bother me during my skate, I didn’t think about it, but it made me focus on different things. I am of course also very happy with my season’s best score.”

Slovakia’s Nicole Rajicova came in fifth with 64.08. The skater landed a triple Lutz-double loop, triple loop, and double Axel in her routine to “Love Story” by Francis Lai. She also received level 4s for all elements.

“I’m extremely pleased,” said the 23-year-old who took eight months off and didn’t see ice until October. “Two weeks ago, I didn’t know if I was going to compete because I wasn’t in the shape I wished I was in. My coach said, ‘I’ve seen you do wonders in two weeks, so if you want to do it, it’s all on you.’ I went back home and worked really hard and here I am! I’m really happy that some sort of hard work was shown on that ice.”

“I thought I was completely done with skating,” said Rajicova on her move to Slovakia. “I’m lucky I have a huge family there. The fact I was able to keep skating in the mix kept my mind occupied with the transition. The president of the federation told me way back when I was getting on the ice, ‘where there’s a will, there’s a way.’ Somehow I make do (on juggling full-time work  and training). I try to get on the ice one a day, six days a week. I didn’t come back to try and compete. I came back because I realized it’s actually really quite fun.”

Mae-Berenice Meite struggled with a triple Luz and sits in eighth (58.95). “I’m disappointed about the (triple) Lutz,” said the five-time French national champion. “That cost me a lot of points and maybe the last group warm up.”

This season, the skater made the decision to train in Tampa, Florida, with Silvia Fontana and John Zimmerman. “I want to go for four more years,” she revealed. “I want to have a team around me to build something for the next four seasons. I see the progress that Vanessa (James) and Morgan (Cipres) have made and I figured that would be nice to try and see how it would work for me.”