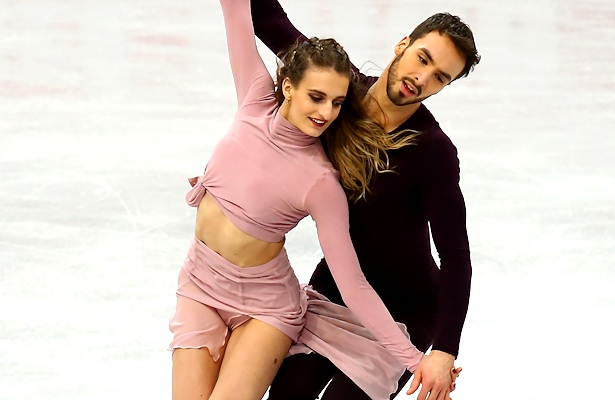 Gabriella Papadakis and Guillaume Cizeron of France won their fifth consecutive European title at the 2019 European Figure Skating Championships with 10 points to spare. Alexandra Stepanova and Ivan Bukin of Russia captured the silver while Italy’s Charlene Guignard and Marco Fabbri earned the bronze.

Papadakis and Cizeron were strong in their routine to music by Rachael Yamagata, earning high grades of execution (GOE) on every element. The 2018 Olympic silver medalists were awarded level 4s for their twizzles and one-foot step sequences, as well as the lifts and diagonal steps. They earned a new season’s best of 133.19 for a first place finish in the free dance and overall (217.98).

“We are really happy,” said Cizeron. “That skate was almost technically perfect. The crowd was really uplifting and we couldn’t be more grateful to them and to be surrounded by our amazing team. We remember this arena from Junior Worlds and I remember it seemed really huge then. It still seems pretty big now, but the crowd really lifted us and helped our performance.”

Stepanova and Bukin of Russia also put out a good routine, performing to Beth Hart’s “Am I The One.” Their performance featured difficult level 4 lifts and the 2018 European bronze medalist were also awarded level 4 on the twizzles. They topped their score from 2018 Rostelecom cup with 125.04 points for second place in the free dance and overall (206.41).

“For us, it is really nice to get the silver medal after we had two bronze medals at Europeans,” said Bukin. “It is a big step forward for us. Everything happened so fast. It was a bit nerve-wracking, we stood in second place (following the Rhythm Dance) and we had to retain our emotions. We’re just happy that we skated well and we’ll analyze the program later”

“You need to have a good connection, otherwise you cannot show this relationship on the ice,” he said when asked about their connection. “We’ve worked for many years to feel each other and also that not only we understand what we’re skating, but also you, the spectators.”

Italian national champions Guignard and Fabbri  also turned in a season’s best (120.79), finishing fourth in the free dance and third overall (199.84). All elements in their routine to music from La La Land were graded a level 4 with high GOEs.

“It’s hard to say something right now, because we’ve worked a lot throughout this year, said Fabbri of the bronze-medal win. “We started from less than zero. I was a single skater before I started my ice dance career and, with her previous partner, she never really achieved a high level. Step by step, we built a strong partnership on the ice because, off-the ice, we were a couple. It’s really rewarding. Charlene’s emotions tell everything right now. More than words.”

(On being inspired by Matteo Rizzo winning a bronze medal in the men’s event) We didn’t see the program, we just saw the results. He’s a fighter so he gave us even more energy to fight tonight. We were a little bit tired and even though we tried not to think to much, we were feeling the pressure a little bit. You know that you’re fighting for something important, you really try to think about something different. It’s not easy to switch your brain and think to other things.Gabriella

Victoria Sinitsina and Nikita Katsalapov of Russia, who stood in fifth after the short dance, finished third in the free dance (123.71).

“That was one of the most difficult skates, because we wanted so much to skate fully under control,” said Katsalapov. “What happened yesterday was so unexpected and we lost so many points, we didn’t want anything unexpected to happen today.”

The Russian national champions received a deduction for an extended lift on their rotational lift, but otherwise earned a level 4 on all elements except for the serpentine steps (level 3). They finished fourth overall (193.95).

“We fought hard to show the beautiful choreography of our program and avoid any stupid mistakes,” said said Katsalapov. “At a certain point, our program almost skates itself – not to say that we are thinking about other things, but our body goes on to autopilot, it hears the music and knows what to do.”

Poland’s Natalia Kaliszek and Maksim Spodiriev, who were 10th last year, showed much improvement, earning a level 4 on all elements except for their level 3 midline steps.

“We feel great now, but it was a hard skate,” admitted Kaliszek. “We tried to show everything that we can do. I think we did that. It is always difficult, because you’re tense, you are thinking, and that prevents you from doing the elements at the very best.”

“In my mind, I’m still skating,” said Spodyriev. “I need some time to get back to normal. These are great emotions and I’m happy with what we showed. But the ice is very dry. Yesterday, we skated after the ice resurfacing and now, in the second group, we felt the difference. We skated both programs better than ever, but still I think that the short was a bit better than the long. We still have to work on making the elements look easy.”

Lilah Fear and Lewis Gibson of Great Britain rounded out the top six with 182.05 points.

“Being back at a big championships has been a different experience for us,” said Fear. “Obviously, we had the Grand Prix events but this is a big crowd and more pressure, and we’re really pleased to have been able to show everything we’ve been working on back in Montreal.”

“We’re really happy to have done two good skates,” Gibson added. “We came in with the goal of a top-ten finish after we came 15th two years ago. Now we’ve managed to get two spots for Great Britain next year which is really exciting.”