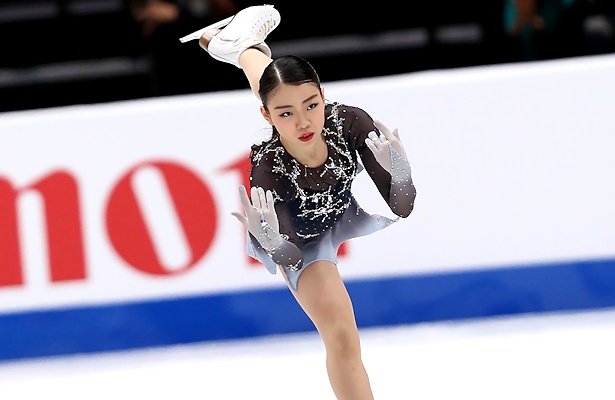 In her debut at this event, Japan’s Rika Kihira rose from fifth to capture the gold in the Ladies’ discipline at the 2019 Four Continents Figure Skating Championships. Elizabet Tursynbaeva of Kazakhstan, who won the silver, became the first lady in figure skating from her country to earn a medal at an ISU Championship. Defending silver medalist Mai Mihara of Japan rose from eighth to snatch the bronze, edging teammate Kaori Sakamoto off the podium by a mere 0.33 point.

Kihira opened her ethereal routine to “Beautiful Storm” with a solid triple Axel followed by a double Axel-triple toe. The 2018-19 Grand Prix Final champion had a tight landing on a triple loop, but otherwise went on to land five more triples. The 2019 Japanese silver medalist also earned level 4s on all her elements, scoring 153.14 for first place in the free skate and overall (221.99).

The skater said she wanted to “give her all” to today’s performance and “leave yesterday’s mistakes” behind.

“I was hardly able to practice my triple Axel in this rink,” said the 16-year-old when asked about the preparation. “It was during the six- minute warm up today and I even skated my free program for the first time in this rink. I was determined, very focused, and kept my concentration. I nailed that triple Axel because I was able to keep my concentration.”

Mihara tackled her elements in her lyrical routine to music from The Mission soundtrack, giving a double small fist pump at the end. The defending silver medalist underroated the back end of her opening triple Lutz-triple toe, but rallied back to land five solid triples, showing level 4 footwork and strong spins throughout. She scored a season’s best of 141.97, topping her score from 2018 Nebelhorn Trophy where she won silver earlier this season. With a total score of 207.12, rose from eighth place to capture the bronze.

“Before my practice, I felt this is America because a lot of audience are cheerful, and I appreciated being in this big event,” said the 2018 Internationaux de France silver medalist. “I really appreciated this opportunity and my coach told me to enjoy and feel like you were dancing.”

“After my mistakes on the jumps in short, I got confused,” the 19-year-old continued. I wanted to show a good performance to audience. My fans and friends from Japan cheered me up. I was so happy when was done with the free so I raised my fist.”

Tursynbaeva fell on her opening quad Salchow, but was otherwise clean in her routine to “Otono Porteno,” landing a total of seven triple jumps while earning level 4 on all her spins. The the 18-year-old scored a new season’s best of 139. 37 for second place in the free skate—a 10-point increase from her score at Finlandia earlier this fall where she won silver. Her overall total score of 207.46 boosted her from sixth to second place overall.

“This is unexpected for me,” said the skater who won silver at both her Challenger series earlier this season. “I didn’t think I would be on the podium today.”

Tursynbaeva felt that after being in sixth after the short, she had nothing to lose by attempting the quad Salchow.

“I still have work to do on it, but it wasn’t bad for a first time in competition,” she said. “I rotated it but didn’t land it. I’m happy I attempted it and will keep trying until I land it. I started working on the jump in 2016, but only started training it in my program a couple weeks ago.”

The skater will be competing at the upcoming Universiade in Russia before going to Worlds.

Sakamoto, who stood in second after the short, had a few glitches in her moving routine to music from The Piano soundtrack. The  2019 Japanese national champion received an edge call on a triple Lutz and later popped a double Axel. She tacked on a double toe on her triple loop at the end, but it wasn’t enough. In all, she landed five clean triples, but earned a level 4 on all spins to finish fourth in the free skate (133.43) and overall (206.79).

“From the start, I was not able to skate my skate,” said the 2018 Four Continents champion. “I was very nervous and I missed some elements. It was such a disappointment, but I learned from this failure. I want to be stronger. At the World Championships, I want to put out the performance, both short and free, that is sharp and clean.”

USA’s Bradie Tennell underrotated several jumps in her “Romeo and Juliet” routine, only landing two solid triples. While she earned a level 4 on all spins and footwork, the mistakes were costly and the overnight leader finished fifth in the free skate (128.16) and overall (202.07).

“I have been hitting it every time all week,” said the 2019 U.S. silver medalist of her combination. “The only place I’ve been missing it is in competition, so it’s very frustrating. One of the things to improve on for Worlds. I skate clean programs every day, it shouldn’t have been any different here. I’ll go back home and train and work harder. We’ll make a couple adjustments to the program and see what happens from there.”

Teammate Mariah Bell, who stood in third after the short, fell on a triple loop and later doubled a Lutz in her otherwise moving performance to music from The Piano. The 22-year-old finished sixth in the free skate (123.92) and slipped to sixth overall (193.94).

“I’m nervous all the time, but if was going to make any excuse, I think it would be that we had a really quick turnaround from our Nationals,” said the 2019 U.S. bronze medalist. “I didn’t have quite the amount of time that I wanted to train in between competitions.”

“There were silly mistakes today,” Bell continued. “My mind kind of got away from from me. I was surprised by the fall on the loop and then I kind of had a hard time re-focusing after that. You live and learn and Worlds will be better.”

South Korea’s Yelim Kim skated a lyrical routine to “Meditation” from Thaïs which featured a triple Lutz-triple toe as well as four more clean triples. All elements garnered a level 4 and the 2018-19 Junior Grand Prix finalist placed seventh (123.51) in the free skate and  moved up one spot to eighth overall (187.93) in her debut at this event.

“I did a little mistake today, but the first half is like usual,” said Kim. “I felt good today. I think this competition is more fun than the other competition and is more enjoyable.”

Teammate Eunsoo Lim gave a playful performance to jazzy music from the Chicago musical, but had several turnouts in her jumping passes. The skater was clearly disappointed while coach Rafael Arutyunyan tried to give her words of encouragement when she left the ice. She finished eighth in the free skate and slipped from fourth to seventh overall (191.85).

“I felt like everything is not working today,” said the 15-year-old who won silver at nationals. “It’s just an experience. I don’t think today I had any part that’s good. I’ll just prepare for senior World. I want to do better than today. I will work hard in the next month.”

USA’s Ting Cui, who stood in seventh after the short, suffered four falls and finished 11th in her debut at this event.

“I don’t really know what happened,” said the 2018 Tallinn Trophy silver medalist. “I’ll have to go back and watch and analyze my performance, but it just kind of got away from me. I think I was a little hesitant. I was trying to regain my focus after the mistakes, but that was just a rough program. It was definitely a good learning experience.”