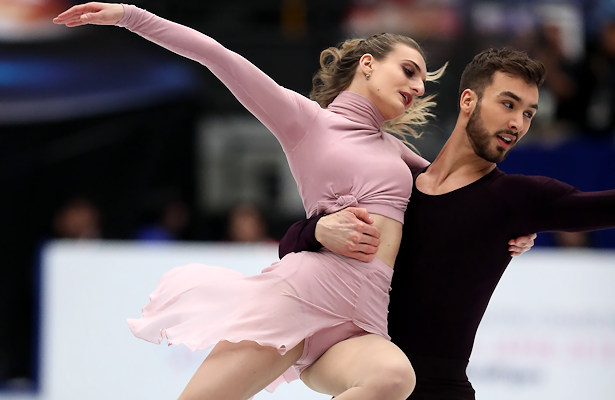 Overnight leaders and defending champions Papadakis and Cizeron delivered a superb routine to music by Rachael Yamagata, earning high grades of execution (GOE) on every element. The 2019 European champions were were awarded many “10s” in the Program Components, mostly for performance, composition, and music interpretation. All elements were graded a level 4 and they earned a new season’s best of 133.19 for a first place finish in the free dance and overall (222.65).

“We are so happy with our performance today!” said Cizeron. “It was such a tough competition. All competitors have worked very hard and it is such a high level in ice dance this year. We did a good job today and we are proud of ourselves. We always feel so supported in Japan.”

“Every year it is a little different,” said Papadakis. “We go through difficulties every year. This year was so different from last year, it is post-Olympic. We had shorter preparations, not as many competitions as before, everybody was a little bit more tired than last year. It is always a challenge, but we take them easily. We wanted to enjoy this competition this year, and we achieved exactly what we wanted to do today. It was a tough competition, it always is. We had a lot of competitors here. It is never easy to fight against stress and pressure, and we are just very proud that we did it again this year.”

Performing to Suite in D “Air” and “Praeludium and Allegro,” Sinitsina and Katsalapov also earned level 4s on all elements, earning high GOEs for their solid twizzles, lifts, and steps, while showing good connection and flow throughout. The 2018-19 Grand Prix Final silver medalists also earned a season’s best (127.82) finishing second overall (211.76), improving from a ninth-place finish from last year.

“Today has been a very long day,” said Sinitsina. “We have been here from the very morning. I can say that the competitions were hard for us, but we tried our best and did everything we could. It has been five years we started to skate together, and we know each other really well. The cooperation in our team comes from our ties and the group of coaches who help us a lot.”

“It is not exactly a kind of performance we wished for, but we fought till the end and did our best,” said Katsalapov. “It has been a tough day for everyone. We stayed focused all the time. We are pleased to get a medal. We will try our best for consistency and clean performances.”

Defending silver medalists Hubbell and Donohue were awarded a new season’s best of 127.31 after their third-place finish for their dramatic performance to music from the modern-day Romeo and Juliet soundtrack. The team was solid, earning level 4 on all elements along with high GOEs. With a total score of 210.40, they moved up from fourth to third overall.

“To skate in front of this wonderful Japanese audience is a dream come true,” said Hubbell. “We feel like we put our strongest performance this season here at Worlds, and that was our goal. We thank all of the Japanese fans for filling the stands and cheering with us. Our goal was to do our best performance and the rest we can’t control, and that was really what we have achieved.”

“Being able to perform here, you grow not just on the ice, but as a team as well,” said Donohue. “We overcome some massive hurdles in our partnership, and to be able to skate what we did throughout all of our practices, and to compete the way we did, I am just very proud of every part of the competition so far.”

“Next season we would love to be competing for the top of the podium,” added Hubbell. “We think that team USA is incredibly strong in ice dance, so it keeps us on our toes. We would love to be the number one team heading into the Beijing games, and going to bring the gold home for team USA. That is really the plan.”

Alexandra Stepanova and Ivan Bukin of Russia finished fourth in the free dance and overall with a new season’s best (125.42 / 208.52), improving from seventh place last year.  The 2019 European silver medalists earned a level 4 on all elements with many positive GOEs in their bluesy routine to Beth Hart’s “Am I The One.”

“To tell the truth, I can say nothing about my performance,” said Stepanova. “I trust to the evaluation given to us by our coaches, and they said we did well. We have done our best and showed everything we could. Now we realize that we are ready to fight for the top three in the world. It is really important for us, it is a big step forward for us.”

“We could only focus on the training for the World Championships after the Europeans and did not have enough time to think about our next season’s programs,” said Bukin when asked about next season. “Now we have finished everything. We will go back home, and start the preparations as soon as possible. We need the time to work through the programs.”

Canadian champions Kaitlyn Weaver and Andrew Poje maintained fifth (205.62) overall after a fifth-place finish in the free dance (122.78). The 2019 Four Continents silver delivered a lyrical performance to “S.O.S. d’un terrien en détresse” which featured strong level 4 lifts and steps, but Weaver only earned a level 2 on her twizzles.

“We felt so calm and free and that’s exactly the place we wanted to perform this program in,” said Weaver. “It wasn’t perfect, but this program is about more than just the levels and the score, so we feel good today. Today, we skated for ourselves and for Denis Ten and there was really no shame in that and we are going to go home happy.”

“We have been in the top five (in Worlds) for a long time and it feels like it’s just finding those little details and those little special things that make you unique,” said Poje. “We try to bring those out in our performances. I mean, we try to bring out our story and our connection with the crowd.”

Poje said one of their favorite moments is looking out in the crowd before the warm up. “Just seeing all the familiar fans and friends out there supporting us. We just feel warm, we feel at home here and we just want to thank them for their support and we just hope that they feel our love for them.”

USA’s Madison Chock and Evan Bates delivered a playful and routine to “Fever” and “Burning Love” by Elvis Presley, showcasing level 4 twizzles and lifts, as well as much improved diagonal steps and one-foot work. The 2019 Four Continents champions placed sixth (122.60) in the free dance and overall (204.92).

“I think it is our favorite free dance that we have ever had, and it is really our tempo, especially the last piece of music,” said Bates. “It is very audience friendly. And there is also extra joy because it the last time we are performing it. I think that we are having a shortened season that only started in January and competing for just three months. I am so proud of what we have put out together for the great competitions. I think we have shown growth in our skating and consistency in competitions, which was not always true for us.”

“I think that all the changes that have happened to us this season had a great impact on us in a positive way,” said Chock. “We have never felt more confident about ourselves and about our skating as we do now. We are looking back to this point when we really felt the joy of the skating and when we just started skating.”

“It feels like we are kids again, because I love going to the rink,” she explained. “I am excited going to the rink and to train. It is really a new feeling since I was little. I fell in love and I am so happy. It feels so good that our best performance of the season happened here, on the World Championships. Now we are going to go on with our next season, but firstly enjoy our vacation.”

Canadian silver medalists Piper Gilles and Paul Poirier finished seventh (120.48) in the free dance and overall (200.92) after their flowing routine to “Vincent (Starry, Starry Night)” which featured difficult level 4 lifts. The twizzles and steps were graded a level 3.

“For both of us, it was definitely not our best free dance this season,” said Gilles. “I think both of us were a little nervous, because we knew what kind of pressures there was to move up in the standings. I think we put that on ourselves. Overall, we’re going to miss this program. We’ve got three more years until the Olympics, and I guess it is just a stepping stone for us.”

“I think that is what we’re trying to figure out,” responded Poirier when asked what it would take to get on the podium. “For all the teams that are competing out there, it is a kind of a question mark. We are well aware of our own weaknesses and what we need to improve, but at the same time, sometimes it’s hard to know how to improve those things and what exactly needs to happen.”

Italy’s Charlene Guignard and Marco Fabbri received a few negative GOES for their level 3 rotational lift in their routine to music from La La Land, but earned level 4 on all other elements except for the one-step footwork (level 3). The 2019 European bronze medalists finished eighth (117.52) in the free dance and overall (199.84).

“It has been a good program anyway, and we are happy to have performed it here in Tokyo with this crowd,” he continued. “At the end of the season, we are going to take a little break before starting again, because it has been a demanding season, so we will need it for sure.”

“Everything we have been working on for a few weeks all came together quite well,” said Sorensen. “We have finished our program after two years, it has been a long road and it is really developed. A lot of challenges to pursue with the new system, and we have been really excited about it. This is really nice to get to celebrate the program and show it as good as we can for the crowd. It has been a phenomenal week!”