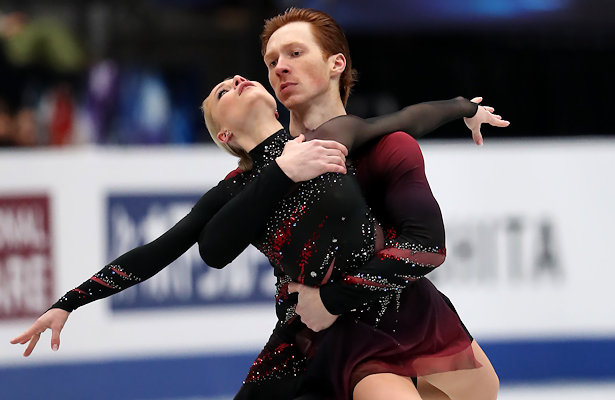 The 2019 World Figure Skating Championships began with the Pairs event in Saitama, Japan, on Wednesday morning. A total of 19 teams skated the Short Program with Evgenia Tarasova and Vladimir Morozov of Russia taking the lead, followed by China’s Wenjing Sui and Cong Han and Cheng Peng and Yang Jin.

Tarasova and Morozov were immaculate in their performance to Rachmaninoff’s “Piano Concerto No. 2,” which featured a triple twist, side-by-side triple toes, and a throw triple loop. The current silver medalists earned high grades of execution (GOE) on all elements which were graded a level 4 except for the step sequence (level 3). The team earned a new season’s best of 81.21—breaking their own record of the highest current short program score (78. 47) this season (from 2018 Rostelecom Cup).

‘We performed well on our short program,” acknowledged Morozov. “All the elements were clean. The Japanese audience is always welcoming us and we are pleased to skate in such a wonderful environment. I saw some Russian flags in the audience and that also helped to calm us down and skate well for the short program.”

Since the 2019 European Figure Skating Championships, where they finished second, the two-time and current Russian champions have been improving their short program in terms of components as well as trying to have fun on the ice.

“Since the middle of the season, we changed our short program, chose the best one, which we used for European Championship as well,” noted Morozov. “We feel good on the choreography and element of the program, and that helped us to reach higher point as well.”

Sui and Han delivered a strong and expressive routine to “No One Like You,” executing a throw triple twist, side-by-side triple toes, a solid trow triple flip,  also earning high grades of execution (GOE) throughout. Sui appeared elated after landing the elements, immersing herself elatedly into the rest of the routine. The 2018 Olympic silver medalists scored a season’s best of 79.24—a five-point improvement since 2019 Four Continents.

“We heard a lot of support from the audience and we are very delighted to skate in front of such a cheerful audience, and that made me happy,” said Sui. “For last few days, we spent a lot of hours on the road to come here, which had some impact to my injury. But I tried to make sure to relax before the competition. I think our condition is not the best we could be, but we still try to get to the level on what we can at this point.”

“I am pretty satisfied with the short program,” said Han. “Yes we had some mistakes at the beginning, and we will fix them once back at our home. But for now, the short program is over. We would like to perform at our best level for now at free program.”

Teammates Peng and Jin were also solid. The Four Continents bronze medalists gave an upbeat folk-rock routine to “Ophelia” landing side-by-side triple toes, a throw triple loop, and triple twist. The team from Harbin earned a level four on their death spiral and lift and scored 75.51—just shy of their season’s best (75.69) from the 2018-19 Grand Prix Final—for third place.

“I felt relaxed for the short program,” said Peng. “We practiced hard until Worlds, and I think we did what we should be doing. At Four Continents, our performance was not ideal, so we went back and made adjustments to the details. We want to skate our free program at the best of our abilities.”

“I think we had good short program and I am pleased with it,” said Jin. “Yes, there are a couple of areas that need to be fixed, but the levels of each component are, I felt, good. At every competition, we are trying to skate at our best, and for this Worlds, we want to skate our best for our free program.”

Peng said they “skated with joy,” adding that it was a rare thing for them. “The coach also told us to enjoy every moment of being on the ice, and we accomplished that.  For the free program, we would like to be at our best and aim to win the competition.”

Natalia Zabiiako and Alexander Enbert of Russia are currently in fourth place with 73.96 points. The Grand Prix NHK Trophy and Helsinki champions were powerful in their “Alexander Nevski” routine, landing side-by-side triple toes, a throw triple loop, and triple twist.

“We did all the elements clean,” said Zabiiako. “We have not seen the levels yet, but all in all I enjoyed the performance. We also took a week in Japan for the acclimatization. As you know, the competition time for pairs here is very early, and we needed some time to adjust. We are in good condition now, and we are aiming high.”

“This season it is our second performance in Japan,” Enbert pointed out. “The first time was during the Grand Prix. We really like it here. I also loved our skating today, we did a great job. A week of training in Japan was also important for us because we need some time to concentrate on the preparations only. I was a little bit nervous if I would be able to recover from my injury before the World Championships. It is easier in other sports. I could run on the running machine, for example, but once you skate and try to perform an element, it gets difficult.”

“The change from a princess-like image to being an elegant grown-up woman is something I feel inside of me, my personal changes,” said Zabiiako when asked about her image. “I used to be strong all the time, but now I am trying to show it with my style.”

Canadian champions Kirsten Moore-Towers and Michael Marinaro gave a joyful performance to “The First Time Ever I Saw Your Face,” earning a level 4 on their spins and footwork. The Four Continents silver medalists landed their side-by-side triple toes, but he put a hand down on the landing. They are in a close fifth with 73.08 points.

“I think on the contrary we we were a little disappointed in ourselves,” said Moore-Towers. “We had been training the short a lot better than that. We had just minor errors on the spin and the jump, and so we were fairly pleased to still get a score of 73 with the program that we felt was a little subpar. The last couple weeks of training we had, we felt like we could not be more prepared. We were training so well consistently. So we know tomorrow should be good, compete the way we trained and we will be satisfied.”

“Yes a little bit disappointing,” Marinaro agreed, “because the training in the last couple weeks has been phenomenal. Our mindsets today, our approach today, was what we exactly wanted, so it is a little bit of a disappointment to underachieve out there today. But we already set on what we have to do tomorrow.”

Russia’s Aleksandra Boikova and Dmitrii Kozlovskii are in sixth with 69.99 points. The 2019 European bronze medalists were solid, showing a throw triple Salchow, side-by-side triple Salchows, and triple twist, however, they lost points with a base-value death spiral and level 2 steps.

“To tell the truth, it was very new for us to take part in the World Championships,” said Kozlovskii. “It is our debut, and we are happy that we have started a new chapter of our career with a clean performance. We are content with our short program performance. We can say that the work of our team makes our performance fruitful. Our next goal is to show our best during free skating. Now we need to forget what we have done today and switch to the next performance. Every single competition for us is a little goal. We are training for it, we are seeing our final goal.”

“I felt a little strange that the tribunes were not full of people,” noted Boikova. “I have thought that in Japan more people will come to see us. Anyhow, I felt a lot of support from the crowd, they welcomed us very warmly. Our next goal is to skate a clean performance at the free program. I think every skater wishes for it.”

Vanessa James and Morgan Cipres of France were not par this afternoon. James had a collision with Matteo Guarise during the six-minute warm up which shook them both.

“I don’t know what happened,” she said. “I didn’t see Matteo, Matteo didn’t see me, so we crashed and I fell. It took me off a little and I was not very comfortable after. I felt a little dizzy, so I tried to stay focused.”

“Everything happened so fast,” said Guarise. “Vanessa was going backwards and we were skating together backwards too with very strong speed and I tried to slow down as much as possible because I am a big guy and she is tiny. So I hurt myself hitting my hip and my knee, but I think it was okay because we were able to skate fine.”

Cipres doubled his jump on the side-by-side triple toes and James went down on a throw triple flip in their routine to “Uninvited.” The 2019 European champions are currently in seventh with 68.67 points.

“It was a bad skate for us today,” James admitted, “and with the fall, it was very tiring after. It happened, it was a mistake, and it affected the program as well as our concentration. It has never happened to us before, so it was just a bad timing for the World Championships. But we have had a very good season; nothing to regret.”

“After the fall in the six-minute warm-up, I had to see if she could skate since she was in pain,” noted Cipres. “So maybe it is that I did not focus enough on myself. But it’s the competition, you cannot be perfect all the time. We will see what we can do for tomorrow. But nothing to change after today!”

“Morgan has not made a mistake in eight years in a program I think, but it is normal that mistakes happen,” James added. “It is not to do anything with nerves. We have had a very long season and had very high expectations. We have had some very good performances so, one out of ten is not too bad.”