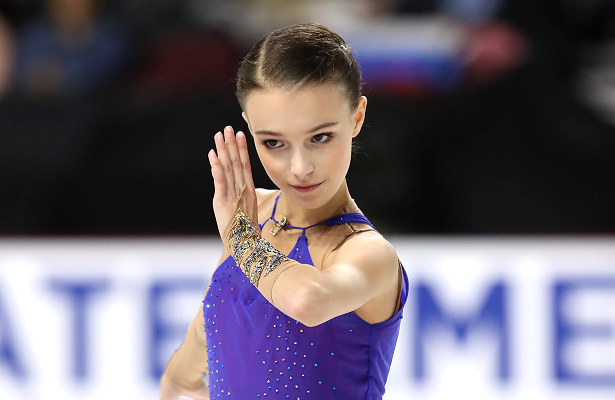 In her debut on the Grand Prix circuit, Anna Shcherbakova of Russia rose from fourth to snatch the gold at 2019 Skate America after landing two quad Lutz jumps in the free skate on Saturday night. USA’s Bradie Tennell took silver, while Russia’s Elizaveta Tuktamysheva rose from fifth to capture the bronze.

Shcherbakova was near flawless in her routine to “Six Gnossiennes” and “Firebird,” reeling off a quad Lutz-triple toe and quad Lutz right out the gate. The only errors came when she underrotated the back end of a triple Lutz-triple loop and triple flip-Euler-triple Salchow. The 2019 World Junior silver medalist also landed two solid double Axels as well as a solo triple Lutz and showed level 4 spins throughout. The 15-year-old racked up 160.16 points, a new personal best and took first overall with another personal best overall score of 227.76.

“My goal was to show (two) quad Lutzes and all my other jumps,” said the skater from Moscow. “This (medal) is very important to me, because this is my first senior season and I want to show clean skating.”

Putting out a sophisticated routine to music from Cinema Paradiso, Tennell delivered six triple jumps, including a triple Lutz-triple toe, a triple Lutz-double toe, and a triple flip-double toe-double loop. The 2019 U.S. silver medalist displayed strong level 4 spins and footwork which garnered many high positive grades of execution (GOE) and the highest program component score of the group. She finished second in the free skate (150.83) and overall (216.14).

“I’m happy with my skate today,” said Tennell. “I think there’s a lot of room for improvement. My goal going into this next week is to just maintain what I have. Obviously, the second triple Lutz-triple toe was a little wobbly, so I’d like to clean that up a bit. Also, I just want to be more free. Last night’s performance was a bit more free than tonight. So I think going into next week, that’s my main goal is to just skate free.”

“I’m always trying to improve in every aspect of my skating, and I think it’s been a process,” the 21-year-old added. “But I think anything is. You don’t get a jump in a day, so you can’t expect to improve your skating in a week. I think that last year was a very good learning year for me. Going into this season, I’m able to take my experiences from last year and draw from them to better myself for this year.”

Tuktamysheva impressed with two triple Axels in her routine to music by the Hot Sardines. The 2019 Lombardia Trophy and Finlandia Trophy silver medalist underrotated a triple lopp, but produced a triple Lutz-double Axel sequence and solo triple Lutz. She also showed good level 4 spins, but only received a level 2 on the footwork. She finished third in the free skate (138.69) and overall (205.97).

“I’m so happy to skate an almost clean free program and I want to improve my program,” said the 22-year-old. “I want to skate clean programs. I can’t do a quad toe or quad Lutz, so for now it is just the triple Axel.”

Kaori Sakamoto of Japan, who stood in second after the short,  doubled a flip in combination with a triple toe,  received an edge call on a triple Lutz, and doubled a triple Salchow in her routine to music from the Matrix. The 2019 Nepela Memorial silver medalists still showed good level 4 footwork and a solid double Axel and earned 129.22 for fourth place. With a total score of 202.47, she slipped to fourth overall.

South Korea’s Eunsoo Lim still struggled with her free skate after a subpar short program. The 16-year-old received an edge call on her opening triple Lutz combination in which the triple toeloop was underrotated. She also later underrotated a triple flip and received another edge call on her solo triple Lutz to finish fifth (120.54). With a total score of 184.50, however, she rose three spots to fifth overall.

Japan’s Wakaba Higuchi, who stood in third after the short, finished sixth in the free skate and fell to sixth overall (181.32). The 18-year-old from Tokyo fell on  her triple Lutz and later underrotated a triple loop and popped a double Axel. She still managed to land a good triple Salchow and triple Lutz-double toe, but her triple flip (in combination with a double toe-double loop) received an edge call.

Yi Christy Leung of Hong Kong moved up one spot to ninth (163.68) overall after placing seventh (109.43) in the free skate. She landed five clean triple jumps, including a triple Lutz-triple toe.

USA’s Amber Glenn fell on a triple flip and popped a Lutz, finishing ninth in the free skate (104.92), but managed to stay in seventh position overall (169.63).

“Going into the free skate, I was very excited but very nervous,” admitted the 2019 U.S. International Classic bronze medalist. “I tried to keep my mind in the right place, but I got distracted. I’m trying to figure out ways to keep my mind together through a full free skate. I want to work on not losing focus to begin with.”

“I think it’s been a great experience,” she said of her first Skate America appearance. “It’s over so quickly. It made me realize how badly I want to be doing this throughout my season, how badly I want to be on the Grand Prix circuit permanently and not just having to fight for one slot. It’s given me a lot of motivation to try and make it back here next year. Whatever I have coming next, I’m going to try and work on focusing through a free skate and just getting in my best shape possible for qualifying season.”

Teammate Karen Chen struggled with nearly all of her jumps to finish 10th (99.64) in the free skate and slipped from sixth to eighth overall (165.67).

“It was definitely not what I trained myself to do,” said the 2018 U.S. bronze medalist. “I started off with one mistake and it just kept building. After I screwed up and put the triple toe after the double Axel, it got to me mentally a little bit, and I just got tenser and tenser as the program went on. It was definitely hard for me to find my rhythm today. I’m so congested and it was really hard for me to breathe through my nose, so I started doing a lot of panting, and I think as I was just doing my program, I was just rushed and panting a lot. I wasn’t doing my deep breaths, so it just affected how I felt throughout my whole program. I thankfully have some time before NHK–time to regroup and start fresh.”