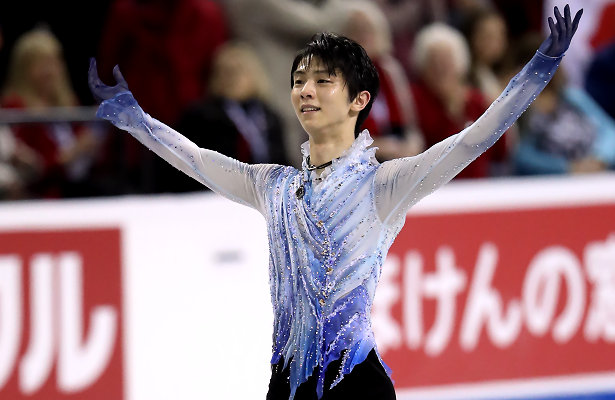 Japan’s Yuzuru Hanyu easily took the lead after the Men’s Short Program on Friday night at 2019 Skate Canada International with 20 points to spare. USA’s Camden Pulkinen is in a solid second in his Grand Prix debut, followed by Canada’s Nam Nguyen.

Hanyu didn’t disappoint when he took the ice in Kelowna, B.C. The two-time Olympic Champion, skating to last season’s “Otonal” by Raul di Blasio, reeled off a quad Salchow which earned mostly +4 and +5 in grades of execution across the board. He followed up with a textbook perfect triple Axel and then landed a quad toe-triple toe. The skater showed excellent artistry and skating skills, displaying level 4 spins and good level 3 footwork throughout. He scored 109.60—over 11 points more than he did earlier this season at 2019 Autumn Classic where he took gold.

“It was not so great, but I felt I did my best today,” said Hanyu. “I felt calm today, but I am not sure if my calmness led to me being more focused.”

In his first Grand Prix event, Pulkinen landed a quad toe, triple Axel and triple Lutz-triple toe in his moving routine to “Caruso”. The 19-year-old earned a level three on most elements, but was awarded a level 4 on his final change combination spin and finished second with a personal best of 89.05.

“This is my senior Grand Prix debut, so I think I surprised myself with scoring 89 points,” said Pulkinen. “I never really knew I could do that until I actually did it. I was just happy that I could hold together a complete program, hold my spins and nail my jumps.”

Performing to “Blues for Klook” by Eddy Louiss, Nguyen put a foot down on a triple Axel, but landed a quad Salchow-triple toe and triple flip. The two-time and current Canadian Champion also earned a level 4 on two spins and earned 84.08 for third place.

“Everything fell into place today,” said Nguyen. “The crowd was great, the energy was insane. The program overall felt great. It was a big step up from Nebelhorn Trophy, but there is a lot more work that needs to be done.”

Deniss Vasiljevs of Latvia, who was last to skate, sits in fourth with a new personal best of 84.01. The 2019 Nepela Memorial bronze medalist wasn’t perfect, but landed a triple flip-triple toe, triple Axel, and triple Lutz (foot down). He received a level 4 and positive GOEs for all three spins and showed good level 3 footwork throughout in his routine to “Bloodstream” by Tokio Myers.

Keiji Tanaka of Japan who was in a car accident in a taxi (along with Marin Honda) on Tuesday, competed with a sore knee. Despite any pain, the 2019 U.S. International Classic gold medalist landed a strong triple Axel, but triple what was meant to be a quad Salchow. He went on to land a triple Lutz-double toe and showed level 4 spins and good level 3 footwork throughout his routine to “Hip Hip Chin Chin,” finishing fifth with 80.11 points.

Russia’s Andrei Lazukin had to hang on to his quad Lutz and then put a hand down on a triple Axel in his routine to “Mack the Knife”. The triple flip (in combination with a triple toe) received an edge call and the skater from St. Petersburg finished sixth with 78.99 points.

Julian Zhi Jie Yee of Malaysia earned a personal best of 75.64 after a solid performance which featured a triple Axel, triple Lutz, and triple flip-triple toe. He is currently in seventh place.

Canada’s Nicolas Nadeau of Canada sits in eight with 75.22. The 22-year-old landed a triple Axel and triple Salchow-triple toe, but had to hang onto a triple loop.

Italy’s Matteo Rizzo had a disappointing skate and sits in eighth (70.12). The 2019 European bronze medalist underrotated and two-footed the landing of a quad toe and and fell on his triple Lutz combination.