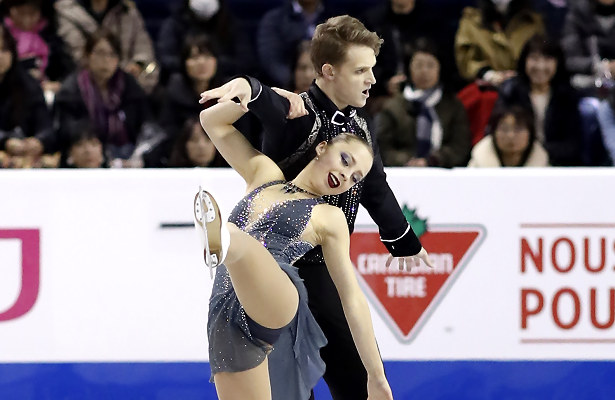 In their second season on the Grand Prix circuit, Russia’s Aleksandra Boikova and Dmitrii Kozlovskii maintained their overnight lead to win their first Grand Prix gold at 2019 Skate Canada International. Kirsten Moore-Towers and Michael Marinaro of Canada took the silver, while Evgenia Tarasova and Vladimir Morozov of Russia pocketed the bronze.

Boikova and Kozlovskii were strong and steady in their skate to “The Writing On The Wall” from James Bond which featured solid side-by-side triple Salchows and triple toe-double toe-double toes. The 2019 European bronze medalists also showed three level 4 lifts as well as a throw triple Lutz and throw triple loop. The judges awarded them with a score of 140.26 for first place in the free skate and overall (216.71).

“We feel good, we did our job well and hope to do even better next time,” Boikova said.

“It was a great performance, a great day for us,” agreed Kozlovskii. “We left all our emotions out there in the arena.”

Moore-Towers and Marinaro put out a strong performance to “Carry You” by Ruelle, but Marinaro had problems with the side-by-side jumps. Despite the mistakes, the team showed a strong triple twist, throw triple loop, and throw triple Salchow. Their routine also featured good lifts and a level 4 combination spin, and the 2019 Four Continents silver medalists earned 132.99 for second place in the free skate and overall (208.49).

“It’s been a bummer day for us,” Moore-Towers admitted. “We’re pleased with our score considering the mistakes we made, but we’ve been practicing a lot better. We don’t believe we need to go back to the drawing board, but just adjust our mindset a little bit.”

Tarasova and Morozov were off to a good start with an excellent level 4 triple twist which received +4 and +5 GOE across the panel. However, she doubled her jump on the side-by-side triple Salchows and the team was unable to get the group 5 Axel lift off the ground. Despite the mistakes, the two-time world silver medalists earned a season’s best of 128.72 for third place in the free skate and overall (202.29).

“Today was not the best performance of our team,” said Morozov. “It is a good lesson for us at the beginning of the season. We’ll just keep working and practicing.”

USA’s Alexa Scimeca-Knierim and Chris Knierim opened with a very strong triple twist in their short to “Drop of Fragrance” by Maxime Rodriguez and “Experience” by Ludovico Einaudi, but he struggled on the jumps and she stepped out of a throw triple flip and two-footed the landing on the throw triple loop. Nevertheless, the 2019 Nebelhorn Trophy silver medalists displayed difficult level 4 lifts and earned a score of 128.29 for fourth place in the free skate and overall (199.57).

The new Canadian team of Liubov Ilyushechkina and Charlie Bilodeau finished fifth (123.85) in the free skate and overall (192.47). While the 2019 Finlandia Trophy bronze medalists struggled with their side-by-side jumps and throw triple flip, their routine to “Je voudrais voir la mer” by Michel Rivard was highlighted by difficult lifts and a solid throw triple loop.