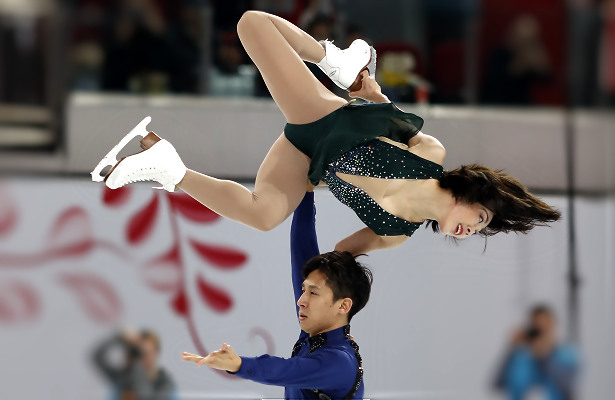 2018 Olympic silver medalists Wenjing Sui and Cong Han of China reclaimed the Cup of China tile in the Pairs’ event on Saturday in Chongqing. Teammates Cheng Peng and Yang Jin rose from third to win the silver, while Canada’s Liubov Ilyushechkina and Charlie Bilodeau took the bronze.

Sui and Han gave a powerful performance to “Rain, In Your Black Eyes,” nailing a level 4 triple twist, death spiral and lifts. The 2019 World Champions also produced good side-by-side triple toe-double toes, a throw triple Salchow and triple flip. The only glaring error came when Han double his jump on the side-by-side triple Salchows. The team earned 147.47 for first in the free skate and overall (228.37).

“The Salchow was not so consistent after my injury, but when we came here, it was at 90 percent in practice,” said Han. “I think I lost concentration and therefore made a mistake.”

“We have now one week before our next event NHK Trophy (in Japan) and I think it is important to organize our training in this time,” he added. “Our choreographer, Lori Nichol, will come with us to Beijing and we’ll mainly work on the short program.”

Peng and Jin doubled their opening triple Salchows and Jin stepped out of the side-by-side triple toes, but their “Cloud Atlas” routine was otherwise solid. The 2019 Four Continents bronze medalists showed a triple twist, throw triple loop and Salchow, and earned a level 4 on two lifts and a spin to finish a strong second  (131.47 / 199.97).

“We had some problems at Skate America and Cup of China in our programs with the solo jumps and the throw jumps,” noted Jin. “The quality was not so good. We also need more speed in the second half. These are the things we want to work on before the Final.”

Ilyushechkina and Bilodeau both underrotated and stepped out of their side-by-side triple Salchows in their routine “Je voudrais voir la mer”.  She also stepped out of a throw triple flip and fell on a throw triple loop, but the 2019 Finlandia Trophy bronze medalists showed two level 4 lifts and a pair combination spin to finish third (121.75 / 190.73).

“It means a lot to us to have won a medal in only our second Grand Prix together,” said Bilodeau. “It shows that it was a good decision to come back and to skate together. We have been skating together only for eight months. When we get home, we’ll work on many things to continue the season with good programs and to improve.”