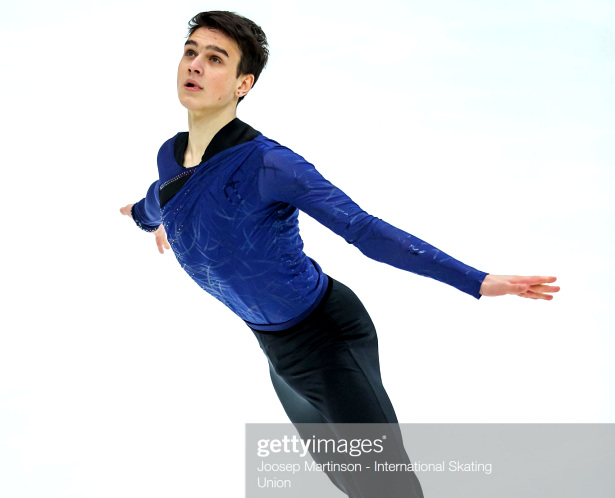 Makar Ignatov of St. Petersburg performs to “In This Shirt” by the The Irrepressibles for his Short Program.

Makar Ignatov took a surprising narrow lead in the Men’s Short Program as the Russian National Championships opened Thursday in Krasnoyarsk. Juniors Andrei Mozalev and Petr Gumennik placed second and third, but the top men are virtually tied at 88-point range. Favorites Dmitri Aliev and Alexander Samarin made errors and will need to show good Free Skates in order to catch up on Friday.

Ignatov produced a quadruple Salchow-triple toeloop combination and nice triple Axel in his routine to “In This Shirt” by The Irrepressibles, but he stumbled out of the quadruple toeloop and his spins were slow. The Rostelecom Cup bronze medalist picked up 88.88 points.

“Some things were good today, some things were not so good. I could have skated better. The free skate is still to come and I hope it will be better,” said the 19-year-old from St. Petersburg. “It is a surprise (to be in first place) but the short program is just about a third of the result and nothing is decided yet.”

“I’m not so pleased with my short program,” shared the 16-year-old who won both his JGP events earlier this season. “There were errors in the jumps and spins, but overall, it wasn’t bad. I’m in a good mood and will fight in the free.”

“I’m happy with my skate,” said the 17-year-old. “I did almost everything and I hope to skate as well in the free. It helped me that I didn’t think about placements. I want to do the same in the free skating and hopefully it will help.”

Aliev tripled his opening quad Lutz in combination with a triple toe in his expressive program to “Je dors sur les roses” from Mozart L’Opera Rock. He went on to land a quadruple toe and then put his hand down on an underrotated triple Axel. He remains within striking distance of the podium in fourth place at 87.35 points.

“It was hard to skate last, but I was not too nervous or over excited,” said the 20-year-old. “It was hard to keep the focus, though, and maybe that led to the error on the Lutz. I can do the Lutz, but today I just didn’t do it.”

Skating to “Mack the Knife,” Andrei Lazukin nailed his opening quad toe and hung on to the triple Axel. He then doubled the front end of  triple Lutz-triple toe to score 85.55 points for fifth place.

“I made a big error, I popped the Lutz (into a double),” said Lazukin, who had a knee injury and didn’t train much in the past four weeks. “Just the day before, we decided to make the program easier (taking out the quad Lutz) and I still made a mistake.”

Anton Shulepov sits in sixth with 81.17 points. The 23-year-old landed a triple flip and triple Axel, but put a footdown on the triple Lutz-triple toe.

As usual, Samarin took risks, but he stepped out of the quad Lutz and quad flip and had no combination. The ISU Grand Prix finalist also struggled on the landing of the triple Axel and finished eighth with 80.68 points.

“Nothing predicted this kind of performance. I’ll fight in the free,” he commented.

Sergei Voronov landed a quad toe-double toe and a triple Lutz, but popped his Axel into a double and stepped out of the landing to place ninth (79.61).