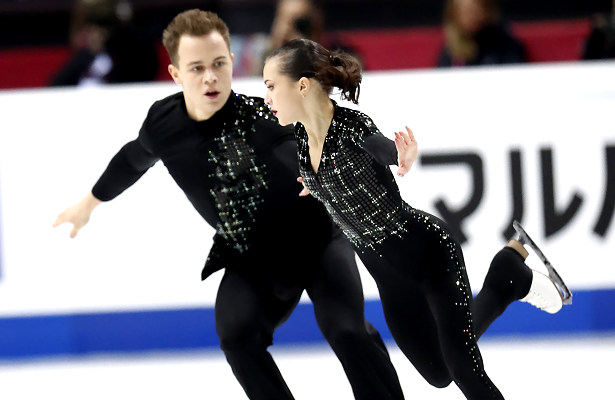 Apollinariia Panfilova and Dmitry Rylov of Russia perform their Short Program at the 2019-20 Junior Grand Prix Final of Figure Skating.

Russia’s Apollinariia Panfilova and Dmitry Rylov currently lead the junior Pairs after the Short Program took place on Thursday in Torino, Italy. Teammates Kseniia Akhanteva and Valerii Kolesov and Diana Mukhametzianova and Ilya Mironov are close behind in second and third place, respectively.

Skating to the familiar music from The Matrix soundtrack, Panfilova and Rylov landed a very strong level 4 triple twist, side-by-side double Axels and a solid throw triple flip right out the gate. The 2019 World Junior silver medalists appeared a bit tight, but still showed quality skating, earning a level 4 on their lift and footwork. However, the death spiral was graded a level 1 and the footwork a level 2. They scored 68.80 points.

“It was a practice version of our program,” said Panfilova. “We always want to do our very best when we go out, independently of the placement. Obviously, it is nice to be in first.”

“We are not a one hundred percent satisfied,” added Rylov. “On three elements, we did not as well as we could have done. We lost a level on the death spiral, but it was not so important. We got a minus on the Axel and on the death spiral and maybe on the spin, and we didn’t get that many plusses on the throw. At the end of the step sequence, I just improvised a bit because we were ahead of the music. We could have received more points and also get more in the components.”

This is the third consecutive year the team from Perm has competed in the Junior Grand Prix (JGP) Final. They took silver in 2017-18 and bronze last year. This season, they come in as the front-runners.

“I think it means more responsibility,” said Rylov. “Everyone looks more at us than at the others and sometimes that puts pressure on you and sometimes it is the opposite.”

“To come here as the leaders for the first time didn’t change anything inside,” said Panfilova. “We still want to do our best, but it gives us extra confidence.”

Akhanteva and Kolesov, who were fourth at this event last season, put out a good performance to music from the Interstellar soundtrack, landing a triple twist, throw triple flip, and double Axels. The reverse lift was graded a level 4 as was the death spiral and change combination spin. The team from St. Petersburg earned 66.64 points.

“In general, we are quite satisfied with the skate today,” said Akhanteva. “We completed the task we set for ourselves for this skate. In the free skate, we will be trying to show the highest quality of the elements.”

“Today we skated clean,” agreed Kolesov. “There was only one minor mistake on the step sequence, we got a level down for it. However, overall we are very satisfied with the skate today. We are aiming for gold, but most important is to show clean programs in both short and free skating.

Mukhametzianova and Mironov produced a triple twist, throw triple flip and side-by-side double Axels in their routine to “Crack of Doom” by The Tiger Lillies. The reverse lift and footwork both garnered a level 4 while the footwork was a level 3. They sit in third with 64.90 points.

“It could have gone better, but considering we changed our program less than a month ago, I think it was OK,” offered Mironov. “We didn’t decide to change it, our coaches did. I think we understand this program better and it shows our quality more. I wouldn’t say I like it more, but the music is much wider and freer and I think it is better for us than the previous one. The free program is still all the same, though.”

Teammates Alina Pepeleva and Roman Pleshkov showed good focus in their crowd-pleasing routine to L.O.V.E. , landing a solid triple twist and side-by-side double Axels, however she put a foot down on the throw triple flip. The 2019 CS Warsaw Cup bronze silver medalists also produced a level 4 death spiral and level 3 spin and footwork to place a close fourth with 64.67 points.

“We feel a little disappointed that our twist lift, sequence and spin got only third level,” admitted Pleshkov. “Also, we made a mistake on the throw where we lost about three points, but we don’t get upset. We have things to work on and also we have a free program to skate where we will try to do our best. Our goal is to skate clean and the scores will show whether it’s enough or not.”

Just over a point behind, Iulia Artemeva and Mikhail Nazarychev of Russia placed fifth with 63.89 points. In their debut at this event, the team from Perm showed an expressive routine to “Senza Parole,” which featured a triple twist, double Axels, and throw triple flip. The death spiral, footwork and spin were all graded a level 4, however, the grades of execution (GOE) were not as high as that of their teammates.

“We made a mistake on the lift, but in general, I’m pleased with our performance although everything came out not the way we wanted,” said Nazarychev. “I got used to the team and conditions we are training in and we want just to always skate clean without any mistakes. We can achieve the highest results and level.”

“I’m unhappy with our program because we made a mistake on the most valuable element,” said Artemeva. “In the future, I want to achieve the highest titles.”

The newly-formed German team of Annika Hocke and Robert Kunkel are sixth with 59.47 after their routine to “Wasting My Young Years.” While there were no major errors, the JGP Baltic Cup and Croatia Cup bronze medalists are looking to gain experience together.

“Being on the ice was amazing!” said Hocke, who has already competed at the Olympics (2018) with former partner Ruben Blommaert. “It was so much fun to skate in front of more than five people. I love a crowd. We had a blast!”

They were the only non-Russian team to compete in this segment of the event.

“I tend to forget that, but it’s really amazing that we’re the only non-Russians. It makes us the outsiders I guess,” said Hocke.

“I was very nervous before we skated, but now it’s OK,” said Kunkel. “It’s my first big competition in front of a crowd that is not just fathers and mothers and other skaters.”