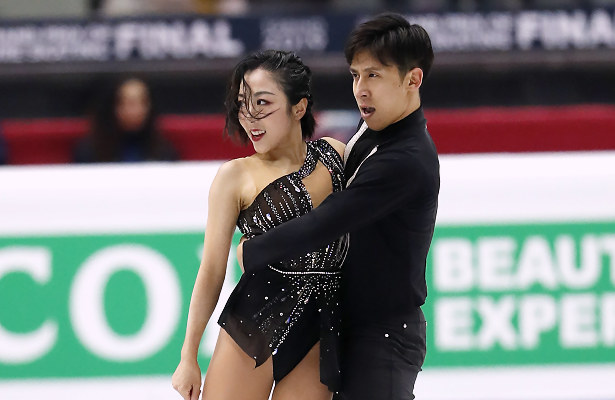 Wenjing Sui and Cong Han of China perform their Short Program at the 2019-20 Grand Prix Final of Figure Skating.

Olympic silver medalists Wenjing Sui and Cong Han of China took the lead in the Pairs event after the Short Program in Torino, Italy, on Thursday. Russia’s Aleksandra Boikova and Dmitrii Kozlovskii is less than one point behind the World Champions, while teammates Daria Pavliuchenko and Denis Khodykin are currently third.

In their steamy performance to “Blues Deluxe” Sui and Han, landed their triple toes, however, she put a hand down on the throw triple flip and the final reverse lift was graded a level 2. The team from Harbin, who are competing in their fourth Grand Prix (GP) Final, otherwise showed a strong program which featured a level 4 triple twist, footwork, and death spiral, and scored 77.50 points.

“We were not really satisfied with our today’s performance,” said Sui. “The skating and execution was a little tight and we also made some small mistakes. We are more relaxed in the training, and the quality on some details would be higher compared to today’s performance. We haven’t looked into the detailed score yet, but maybe we also lost some levels. As for tomorrow’s free skating, we just want to do our best.”

Boikova and Kozlovskii were solid in their performance to “My Way,” displaying solid triple Salchows, a level three triple twist and throw triple flip. The technical score was higher than that of Sui and Han, however, the program component scores were not. The 2019 European bronze medalists also earned a level 4 on all other elements to score 76.65 points.

“Today, we were both a little bit nervous and I think we can show more emotion, and more confidence in our skating,” admitted Boikova.

“This is a great arena, an Olympic arena,” added Kozlovskii. “In this arena, Russian skaters won three gold medals and so this means a lot to us.”

Pavliuchenko and Khodykin delivered a good performance to “The Storm” by  Balazs Havasi, landing triple toes, a level 4 triple twist, and throw triple loop. All elements were graded a level 4 and the currently sit in third with 75.16 points.

“There are always things to work on, but there’s still the free program to go and we didn’t skate badly today,” said Pavliuchenko.

“We’re happy, we got more or less everything,” add her partner. “There are some technical levels we can work on, but we’re happy with the skate. It’s our third time here (at the Grand Prix Final – once Junior and twice Senior) so we are just focusing on the skate.”

Anastasia Mishina and Aleksandr Galliamov of Russia are in fourth with 71.48 points after their routine to “Je suis malade.” The 2019 World Junior champions were near perfect except for an error on their flying camel combination spin which received no level. The team from St. Petersburg otherwise produced a solid level 3 triple twist, throw triple flip and triple Salchows. The lift, footwork, and death spiral were graded a level 4.

“In general the performance was quite good, but we will work on to show a good skating tomorrow,” said Galliamov. “We feel absolutely comfortable in seniors—it’s not the first or second competition for us this season. Here, a lot of skaters are our age—I even met some of them when I was skating in singles.”

“We were not nervous and were skating quite easily,” added Mishina. “We made a mistake in the spin, but haven’t figured out yet what happened. Also we’ve got the level 3 for our twist lift. We should have a look to understand what happened there. It is a very cozy atmosphere here, we had a warm-up and went to skate just like on practice. The half of Russian finalists came from juniors recently, so we already met on competitions and feel very comfortable here.”

China’s Cheng Peng and Yang Jin sit in fifth with 69.67 points after their “Alegria” routine. The 2019 Four Continents bronze medalists showed a solid triple twist and landed their triple toes, but Peng put a foot down on the throw triple loop.

“We are not satisfied with our performance today,” claimed Peng. “The skating was tight and we weren’t really clean in lots of elements, which results in us losing some points in the technical part. For the free skate tomorrow, we just want to do our best. Jin’s luggage was lost and they just found it yesterday, so we weren’t able to practice for five days. I think it indeed impacted our training.”

“As for Peng’s (ankle) injury,” it’s quite stubborn and not becoming better,” added Jin, “but as long as we’re still training, it cannot be cured entirely. As for the goal of this competition, we just want to do our best.”

Kirsten Moore-Towers and Michael Marinaro of Canada had a disappointing performance for a sixth-place finish (67.08). The 2019 Four Continents silver medalists were off to a good start with a triple twist, but she fell on the throw triple loop and stepped out of the triple toes.

“We were feeling great before we started, but we made a couple of uncharacteristic mistakes, making it really hard for us to come back,” said Moore-Towers. “We tried to keep performing in the program, but it’s difficult when we don’t practice like this. It was hard to get our footing again, so we’re trying to leave it in the past and move on now.”

“We’ve been trying this season to work more on our artistry and our components and we feel that’s actually made our technical aspect a lot better and it’s improved our scores,” she added when asked whether they will focus more on artistry or technical in the free skate. “So tomorrow, our strategy is to remain unchanged—leave everything as we’ve been doing it and leave today as a fluky, weird program that we will try to never do again.”

“In the last couple of seasons we haven’t really had a turnaround like that, so it was pretty new to us,” said Marinaro of the competing at NHK Trophy so close to the Final. “It was definitely a difficult four days, but we had some stuff we had to work on from NHK. We lost a couple of levels, so we tried to clean up most of that, but we’re definitely going to focus on that and hit that tomorrow.”