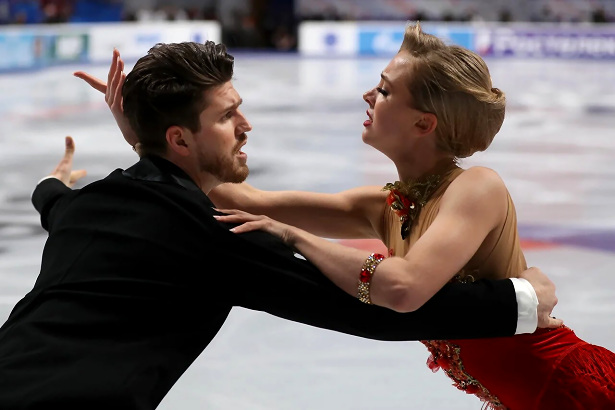 Alexandra Stepanova and Ivan Bukin successfully returned after an 11-month break of competitions to win the Rhythm Dance at the Russian National Championships in Chelyabinsk on Thursday. Tiffani Zagorski and Jonathan Guerreiro are not far behind in second place, followed by Anastasia Skoptcova and Kirill Aleshin.

Stepanova and Bukin’s last competition was the ISU European Figure Skating Championships last January. They were unable to perform at the test skates, at the Grand Prix Rostelecom and at the Russian Cup Series events due to injury and illness. Stepanova had problems with her back, then she came down with Covid-19. As soon as she was healthy again, Bukin caught the virus.

“We had only three weeks to prepare for Russian Nationals,” Stepanova said.

In spite of the challenges, the multiple European medalists did a very good job. They revamped their Rhythm Dance for Worlds that never happened and kept it for the new season. The first part is unchanged to “Sparkling Diamonds” from the Moulin Rouge soundtrack, but the second part is now to “The Show Must Go On.”

The Muscovites collected a level four for all elements: the Finnstep pattern, the partial step sequence, the twizzles and the midline step sequences, as well as the curve lift. However, the team lost a point for an extended curve lift. They scored 87.28 points.

“We did our maximum for today,” Stepanova commented.

“We were so eager to come here, we wanted to compete at Russian Nationals so much,” Bukin added. “We are fed up with being ill. We want to perform and thanks to everyone who supported us, who wrote to us, and waited for us. I hope we’ll now perform more than we did until today. After a break of 11 months, it is like you go out to compete for the very first time.”

Zagorski and Guerreiro put out a very energetic performance of their dance to music from The Greatest Showman soundtrack which featured a level 4 rotational lift, twizzles, and partial steps, but the midline footwork and the Finnstep pattern were graded a level 3. The Rostelecom silver medalists earned 84.02 points.

“We did a good job today,” said Guerreiro. “We had some little errors, which is a shame. We lost a level here and a level there. We wanted to go out full force, there were so many emotions. This might be the biggest competition of the season.”

Performing to music from Bonnie and Clyde, Skoptcova and Aleshin picked up a level-four for the twizzles, the straight line lift and the midline step sequence while the Finnstep and the partial step sequence merited a level three. The 2018 World Junior Champions were awarded 80.19 points.

“We are happy with our performance,” Skoptcova told the press. “For us, it is very important to skate brightly and with emotions. It is rare now that we can perform in front on an audience.” The rink is filled to 30 percent capacity due to Corona restrictions, but some events of the Russian Cup series were held without any audience.

The new team of Elizaveta Khudaiberdieva and Egor Bazin sits in fourth at 78.01 points. They earned a level four for the Finnstep and the rotational lift in their routine to music from the The Artist and “Sing, Sing, Sing,” however, Bazin wobbled on the twizzles which were graded a level two.

“It was of course nerve-wracking,” said Bazin. “The Russian Championships is a competition that is different from all others. Today not everything worked out and we messed up quite a few things. We’ll try to fix it tomorrow (in the Free Dance).”

Sofia Shevchenko and Igor Eremenko came in fifth with a lively dance to music from Burlesque, completing a level-four curve lift and difficult twizzles. The midline step sequence, on the other hand, garnered only a level two. The 2019 World Junior bronze medalists netted 77.83 points.

“These two and a half weeks since the Russian Cup event (in Moscow) we’ve tried to work on certain things that we wanted to show here,” Shevchenko shared. “Emotionally, it is more intense here. We can feel that it is Russian Nationals, here is the whole national team and the event is at another level.”

The gap to the following teams is quite large as Svetlana Lizunova and Alexander Vakhnov are in sixth place with 64.50 points.

Annabelle Morozov and Andrei Bagin, who were expected to be in contention for the top five, disappointed as he stumbled in the Finnstep and then they both fell in the partial step sequence. They plummeted to seventh at 62.17 points.

“It is a shame,” said Bagin. “We had worked a lot, especially on the Finnstep and the partial, and we were ready to show that.” “These things happen,” Morozov added. “We need to move on, forget about it, and show in the Free Dance what we can do.”

Reigning Russian Champions Victoria Sinitsina and Nikita Katsalapov had withdrawn before the event as they are not fully recovered yet after contracting Covid-19.

What are your thoughts on the Rhythm Dance? Discuss here.