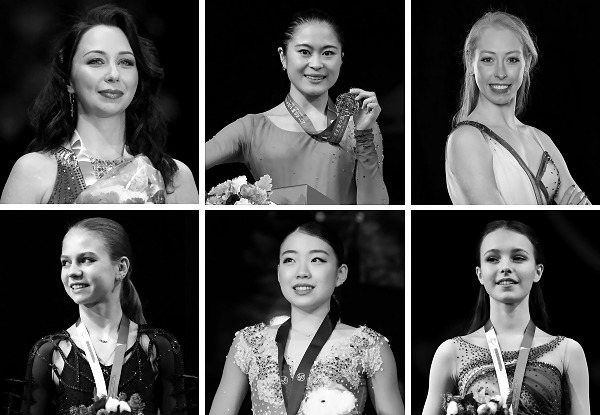 A battle of quads and triple Axels is what is usually expected from the Men’s event at a major ISU competition, however, the Ladies’ discipline have now joined those ranks as well. For the first time in history, we will most likely see multiple quadruple jumps in the Ladies event at the 2021 ISU World Figure Skating Championships in Stockholm, Sweden. This comes two years after the first woman, Elizabet Tursynbaeva of Kazakhstan, performed a quadruple jump at the senior-level World Championships.

Shcherbakova will debut at the ISU World Championships—a year after missing out last season as the event was cancelled due to the ongoing pandemic. The delicate teenager contracted the virus herself, and as a result, missed training time. However, the 2019-20 Grand Prix Final silver medalist, who will turn 17 on the last day of Worlds, put out a stellar performance at Russian Nationals, especially in the Free Skate, to claim her third consecutive national title.

Shcherbakova also skated well at the Russian Team competition at the beginning of February, but opted not go to the Russian Cup Final. The Muscovite, who trains with Eteri Tutberidze and her team, has a quad Lutz and flip in her arsenal and became the first woman to win three consecutive Russian titles since Irina Slutskaya (1999 to 2001). She combines technical difficulty and ethereal skating perfectly.

Kihira will probably be the only woman at the championship that comes armed with not only a quad, but a triple Axel as well. The 18-year-old landed her first quad Salchow at this season’s Japanese Nationals to take her second consecutive title.

The two-time ISU Four Continents Champion has competed at Worlds before—she came in fourth in Saitama in 2019—and has a bit more experience than Shcherbakova and Trusova. Kihira has been training in Switzerland with Stéphane Lambiel since last year. She is considered a “complete package” as she is not only artistic, but technically strong. If she is consistent, she has the best chance to challenge the Russian skaters.

Nicknamed the “quad queen” or “Russian rocket,” Trusova has pushed the limits like no other female skater in the past several years. The now 16-year-old is the first lady to have landed a quadruple Lutz and quadruple flip in international competition and also the first to perform multiple quads in one program—up to four at the Japan Open in 2019. She also has been working on the triple Axel.

But Trusova is more than a jumping machine. Compared to the past, she has significantly improved in her presentation and skating overall, which is probably a result of her growing up and paying more attention to detail in her skating. Trusova switched coaches at the end of the past season from Eteri Tutberidze and her team to Evgeni Plushenko’s school. Due to injury problems, which she does not discuss in public, the national bronze medalist limited her quads in her past two competitions, but hopes to be in top shape in Stockholm.

Tuktamysheva, coronated by her numerous fans as “The Empress,” has fought her way back onto the Russian world team  six years after winning the world title. The 24-year-old has a consistent triple Axel, but the quad toe she has been landing in practice does not seem to be ready for competition. Tuktamysheva was on the rise again this season and won the ISU Grand Prix Rostelecom Cup. At Russian Nationals, she did not skate as well as she had barely recovered from a Covid-19 infection.

Meanwhile the 2015 World and European Champion has since recuperated and earned her spot in Stockholm with strong performances at the Russian Cup Final at the end of February. Tuktamysheva’s innovative Free Skate to Japanese-inspired music “Chronicles of a Mischievous Bird” has also been very popular.

Tennell has quietly worked her way up into the top group of skaters. The 2020 Four Continents bronze medalist has turned in consistent performances and qualified for the ISU Grand Prix Final during the 2019-20 season. In January, she claimed her second national title, which is another confidence boost for the 23-year-old.

Tennell, who switched coaches to Tom Zakrajsek last spring, currently does not include a triple Axel or quad in her programs, but her consistency has been her trump card. The two-time U.S. Champion was also able to improve her component scores by working with choreographer Benoît Richaud.

Miyahara has taken World silver in 2015 and bronze in 2018 and is one of the most elegant skaters on the circuit with very sophisticated programs. The four-time national champion currently trains in Canada under Lee Barkell.

Miyahara has had some problems with under-rotations and has only competed once this season. However, if she can overcome the inconsistencies, she is another top contender and could give herself the best present for her 23rd birthday that she will celebrate on the day of the Ladies Free Skate.

Japan’s powerful Kaori Sakamoto should not be overlooked as she beat Miyahara at nationals earlier this season by over 12 points. Yelim Kim travels as the new Korean Champion to Stockholm while Loena Hendrickx of Belgium recently won the Challenge Cup in The Hague with convincing performances. Other strong competitors include Karen Chen (USA) and Alexia Paganini (SUI).

Youth Olympic Games Champion You Young (KOR) missed qualifying for the World team as she only finished fourth at the Korean Championships. 2019 World silver medalist Elizabet Tursynbaeva (KAZ) has not competed since winning her World medal. 2020 European Champion Alena Kostornaia (FSR) had a rough season and failed to qualify for Worlds.

How close do you think you can predict the placements? Cast your votes and see if you can win your own medal! Don’t forget to join your fellow figure skating fans in the competition threads to share in the excitement when the ladies take the ice on March 24th for the Short Program!