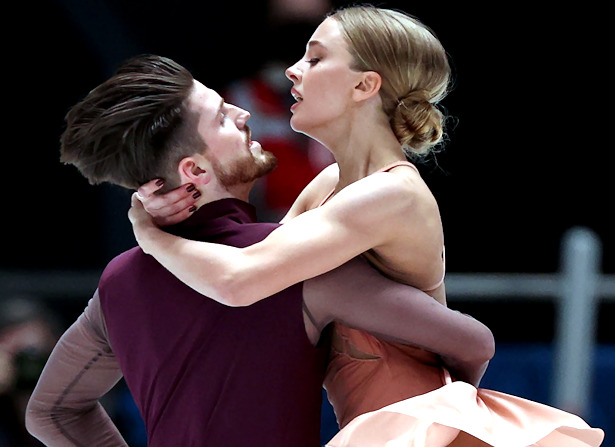 Alexandra Stepanova and Ivan Bukin claimed their second title in an eventful ice dance competition at the 2022 Russian Championships in St. Petersburg on Friday. Diana Davis and Gleb Smolkin earned the silver medal in their debut at Russian Nationals while Elizaveta Khudaiberdieva and Nikita Nazarov moved up from sixth to capture bronze. Top contenders and overnight leaders Victoria Sinitsina and Nikita Katsalapov withdrew before the Free Dance as his back injury flared up again.

Stepanova and Bukin, who stood in second place (88.76) following the Rhythm Dance, delivered a confident performance of their dance to “Romeo and Juliet”. The multiple-European medalists collected a level four for the lifts, spin, twizzles and his one-foot-step sequence. The Muscovites scored 134.61 points and accumulated 223.37 points overall to win their second consecutive title.

“The emotions today were awesome!” said Bukin. “At first there were nerves, then there was happiness. Now there is some kind of exhaustion and we just would like to take a deep breath and have a little rest. This was something incredible, beautiful, it was really pleasant. The day was successful to us!”

Davis and Smolkin were a surprise in second place. The young couple ranked third (83.99) with their upbeat Hip Hop Rhythm Dance and moved up to second with a strong performance of their routine set to Moulin Rouge. The students of Igor Shpilband got a level four for four elements and a level three for the one-foot step sequence and circular footwork to earn 123.71 points. The daughter of famous coach Eteri Tutberidze took silver with 207.70 points.

The quick rise of the couple that ranked fifth at the 2020 World Junior Figure Skating Championships and competed only once at the national Russian Cup final in the past season as she had broken her foot, was questioned by some. However, the team has made a lot of progress and showed good results in their Grand Prix and Challenger events earlier this season.

“To take silver in our first (senior-level) Nationals is obviously an amazing result,” Smolkin commented. “Our task is just to continue to develop so that the results are not unexpected for us, but become the logical result of our work. We are very happy to skate for the audience and this is a great experience. We hope that we will continue to progress and develop the same way.”

Performing to “Experience” by Ludovico Einaudi, Khudaiberdieva and Bazin turned in an emotional and technically solid dance. Their elements were rated a level three and four and they scored 117.84 points. The team moved up from sixth (77.91) following the Rhythm Dance to win their first medal at the National Championships with a total of 195.75 points.

“We are happy about bronze, but the leaders were not here today,” Khudaiberdieva noted. “We will only be substitutes (for the European Championships and Olympic Games), but we hope that nothing happens to anyone.”

“Not only one couple tried to qualify for the Olympics, everyone tried,” said Bazin. “We want to at least have a chance to fight a little bit.”

It was a close battle for that third place. Annabel Morozov and Andrei Bagin had missed some levels in the Rhythm Dance and were fifth (78.02) in the segment. They netted 117.63 points for their “Scheherazade” Free Dance and were edged out by Khudaiberdieva and Bazin by just 0.10 points.

Elizaveta Shanaeva and Devid Naryzhnyy are another team that moved up from juniors and left a good impression with two nice programs. They pulled up from eighth (74.83) after the Rhythm Dance to finish fifth overall (187.19 points).

Tiffani Zagorski and Jonathan Guerreiro had a tough year with him suffering from back problems and her coming down with a viral meningitis. The couple finished fourth (79.36) in the Rhythm Dance, but in the Free Dance Zagorski visibly struggled and they dropped to eighth (179.50 points). Zagorski was totally exhausted and did not even come to the Kiss & Cry, but was taken to the medical room.

“We came here, because we wanted to fight for a spot on the Olympic team and we knew it would be a hard competition,” Guerreiro shared. “Tiffani skated well in the Rhythm Dance, but today it was just physically not possible. We decided to compete after the morning practice, but our coaches said, it can happen that she can’t make it to the end of the program and then we just should stop.”

He added that they hope to be able to compete later this season again.

“There was a stupid mistake in Kirill’s twizzles,” Skoptcova explained. “Apart from that, we did our best. It was emotional, soulful, beautiful, sublime, and tender and we are very proud of ourselves and the coaches.”