2021-22 Women's Skating Predictions and Rankings | Page 5 | Golden Skate
Menu
Log in
Register
Navigation
Install the app
More options
Contact us
Close Menu
You are using an out of date browser. It may not display this or other websites correctly.
You should upgrade or use an alternative browser.

Skatesocs said:
Not necessarily. Otherwise, you'd have taken issue with Kihira being on the list at all, and Shcherbakova who hasn't landed quads this season would need to be much lower.

And you wouldn't bring up Rostelecom 2020, since it's been almost a year since then (not "in the moment"). And why would you put Kostornaia ahead of Liu when you've been complaining about Finlandia scoring, and Liu has landed more 3As this season, than Kostornaia has in this and the last? And you wouldn't put Higuchi on it, who has literally not shown the ability to do a clean LP this season (and landed a clean 3A in a competition that reads more like test skates, except without even needing to do her SP before she did the LP - and you said you don't want to take test skates into account) - sounds more like a "hope" to me. You're taking the past and momentum and politics into account all on your own, but weight it differently.

Anyway, my list is mine. I don't mean for it to be a "hope", and it can't possibly be what I think will happen, since I put 6 Russians on it. And I can update mine at whichever pace I want to. As stated, if she changes my mind during GPF, then she'll be up. @nussnacker suggested after 3 GPs, which maybe I won't do, but the rest of you can.
Click to expand...

I’m cognizant that Kostornaia actually would have matched Liu’s score had she not had the REP issue and also the strength of her SP. And I think she’s returning to form better than Liu is. It’s not like I line up everyone’s seasons best total and call it my top 10. I also said I don’t pay a lot of heed to test skates but have stated that I do consider them somewhat (hence why I have Trusova 4th instead of lower).

I put Higuchi on the list because she still showed a solid 3A and 3-3 combo in Japan Open. But since it’s also one competition and Higuchi isn’t the most consistent I put her in 10th. I think she has momentum but isn’t worthy to be ahead of Kihira and Sakamoto quite yet.

Also yes Rostelecom was a while ago so I don’t give it much credence either. But it is within a year - some folks seem to be using the 2019-2020 season as more indicative of skaters’ level than more recent competitions. People are also cherry picking skaters’ higher technical consistency in 2019 and the higher PCS level in 2021.

People are saying Liza can only win if Trusova and Kostornaia don’t mess up. Agreed. But they’re not exactly NOT messing up! Liza doesn’t have the quads but she is wayyy more solid in her layout and consistency than the other senior Russians.
Last edited: Oct 13, 2021

IMO i think it's fair to only rank those who have competed so far this season, and only based on those results (not test skates). my ranking as of now (for the Russians) is-

Skatesocs said:
Korean Ladies have withdrawn from Asian Open, and the SPs for Finlandia are technically still going on, but I think we've watched enough. Here's the ranking that I'll update only after GPF:

1. Valieva
2. Shcherbakova
3. Kostornaia
4. Trusova
5. Kihira (worrisome, however, that she hasn't participated in anything, and won't till Skate Canada, despite a coaching change)
6. Liu
7. Sakamoto
8. Kromykh
9. You (better programs than Tuktamysheva and better overall skating; on the road to recovery)
10. Tuktamysheva
Click to expand...

These power ranks are pretty much useless, even for fun. Things change very quickly after every new competition. I'll just remind you that last year you also did the same thread. Rika and Alena were number 1 and 2, Young You number 5, all three girls failed last season and did not make the top 5 as you predicted
S

Thanks - I'll still do them anyway
C

I think people just treat power rankings differently. I took them to mean what the current status quo is, and consider them to be different from a prediction for the end of the year/end of the Grand Prix/etc. If we were talking predictions, then yeah my list would look different but seeing as how I don't have a crystal ball and, as you said, a lot can change with every competition/injury (see: Kostornaia)/coaching change (see: Trusova/growth (see: Liu)/withdrawal/etc., I don't tend to make them often. Heck, I get predictions wrong in essentially real-time in the Grand Prix guessing games!

One thing I definitely would not have predicted is Liza's consistency and maintaining it. She is in the twilight of her career and yet she's pulling a Kostner and skating at her very best in her 11th (!) senior season. While her overall choreo/skating still isn't my fave, I have mad respect for her and am happy that she's proving the naysayers (of which admittedly I was for a while) wrong.
R

CanadianSkaterGuy said:
I have mad respect for her and am happy that she's proving the naysayers (of which admittedly I was for a while) wrong.
Click to expand...

.. she is the skater that made me take an interest on this sport, and I'm following this season very closely as I'm very aware that it may be her last

wish her all the best. 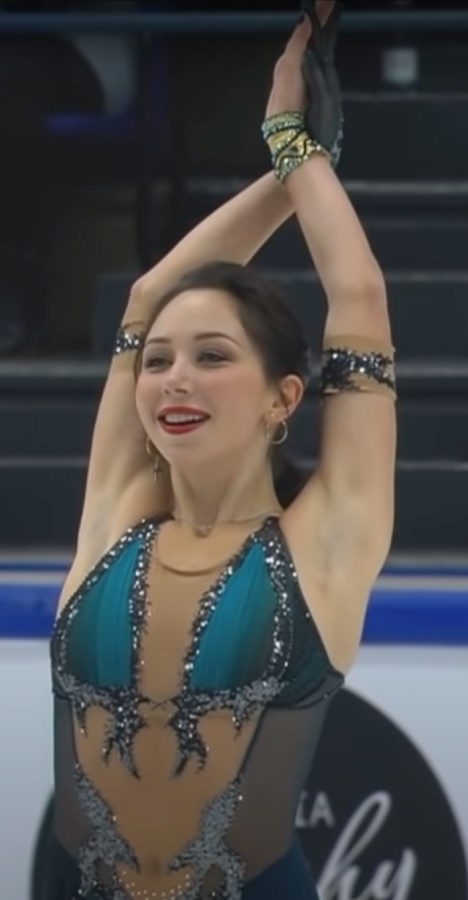 Thorngren in 5th... I honestly don't get it. Can you explain why you chose this ranking?

Lzbee said:
Thorngren in 5th... I honestly don't get it. Can you explain why you chose this ranking?
Click to expand...

I just feel like girls with big jumps (3A, Quad) are peaking around 15-16 years old (except Tuk). After that, they are dealing with injury and going downhill. That's why. Both Higuchi and Thorngren can land 3A. I rank Thorngren higher because of her consistency and younger age. I rank girls based on consistency, not the capability. Some girls (e.g. Sasha, Young You, Amber Glenn) have more nerves than others. This is chaotic Olympics season after all. I guess the last 3 seasons top contenders (Anna, Alena) are going to be replaced by new ones (e.g. Kamila, Maaia). Nobody would expect Nathan ranks 4th in SP at SA. Don't take my predictions seriously, I'm just playing "guessing" game for fun.

Well how else would we get three Japanese women in the top 10!

It’s amazing that the fans have a better ranking system than the ISU.

Yeah, I know I’m asking a lot of the ISU to dust off their 1978 computers and come up with a decent ranking system that can be updated weekly.

I get it, they can only crank the calculator so many times before it breaks, but it’s worth a shot.

I mean, it’s not like golf or tennis or any other sport does that. Haha
J

CanadianSkaterGuy said:
Well how else would we get three Japanese women in the top 10!

How on earth is even one American in there? This must not include actually watching the skaters. Lol Liu wouldn't be top 5 in Japan at Nationals this year.
L

Joekaz said:
How on earth is even one American in there? This must not include actually watching the skaters. Lol Liu wouldn't be top 5 in Japan at Nationals this year.
Click to expand...

Probably just basing it off of season’s best. It’s that list basically with Kostornaia and Sakamoto switched along with Khromykh and Hendrickx, plus Usacheva and juniors taken out

Remember at a nationals competition URs on the favored skaters aren’t called much so Liu scoring 220+ is certainly possible at both American and Japanese nationals.
L

The question will be if Trusova or Kostornaia can show up to Russian nationals in better shape and kick Tuktamysheva off the team. I don’t see it happening tbh with the current picture. As for the Olympics themselves I’m guessing Kihira and Tennell will both miss out which is sad:

Joekaz said:
How on earth is even one American in there? This must not include actually watching the skaters. Lol Liu wouldn't be top 5 in Japan at Nationals this year.
Click to expand...

Are you sure *you’re* the one not watching? Liu has the 9th best total score this season and has consistently posted scores above 200 and isn’t even skating as well as she can. She’s dropped a couple places in my rankings because of a ho hum Grand Prix but she’s still top 10 material (and not just because she’s posted, literally, a top 10 total score).

I may be impressed with her latest success and sympathize with her, but in no existing universe should Loena Hendrickx be put above Kaori Sakamoto in a power ranking. Even if we play pure numbers game, she prevails atm.
You must log in or register to reply here.