2021 Skate Canada: Pairs Short Program | Page 26 | Golden Skate
Menu
Log in
Register
Navigation
Install the app
More options
Contact us
Close Menu
You are using an out of date browser. It may not display this or other websites correctly.
You should upgrade or use an alternative browser.

apgold said:
They will archive what they have. I'm also saying for the rest of the competition. Geez.
Click to expand...

Sorry didn't mean to be a grouch, I'm angry at Peacock and ISU, not you. And I do have Opera and everything but it was already too late. But I'm already catching up on the archived link. Hopefully they'll put the whole program up soon.
B

karne said:
It wouldn't have helped you. The WORLD feed went down. Including the Youtube feed. This wasn't a Peacock issue.
Click to expand...

Peacock didn't come back, they just concluded the event. Everybody else's stream came back.
A

Dawn825 said:
Thanks, I guess I shud quickly get a VPN in case it happens again.
Click to expand...

You are welcome. But as karne said, all the streams went down so VPN would not have helped except to see Sui/Han.
3

Ashley’s 3S was downgraded, cost them a lot.
S

Lutzedge said:
Poor Daria with the tights.☹ Since when was that allowed on a throw twist?
Click to expand...

Savchenko/Massot tried an unorthodox exit from their twist lift at 2016 Nebelhorn Trophy, and got dinged for it:

Hopefully the rules open up a bit on this.
A

Lamente Ariane said:
Quick impressions from the arena- P/K have improved a lot in their presence since I last saw them, Sui and Han absolutely sublime and we all got to our feet. Also really enjoyed Hase/Seegert!
Click to expand...

Thanks for the on scene update. Hope you are having fun. At least you got to see all the pairs.
F

saturdaysun said:
Thanks for the reminder to Ignore.
Click to expand...

Yes, I have already realized that I am dealing with an infantile person

First was argument-"no, it's you toys are bad!", now "I'm not playing with you anymore!". Okey, kiddo, don't worry so much

SubRosa said:
Savchenko/Massot tried an unorthodox exit from their twist lift at 2016 Nebelhorn Trophy, and got dinged for it:

Hopefully the rules open up a bit on this.
Click to expand...

This might be more worrisome than Hubble/Donahue's FD lift.

karne said:
It wouldn't have helped you. The WORLD feed went down. Including the Youtube feed. This wasn't a Peacock issue.
Click to expand...

Please have some empathy. We all have our favorites. If this had happened during Jason's program, you would be flipping tables too.
B

I tried a VPN for the first time. Missed most of the pairs while on chat with Express VPN technician. Problem was fixed when I connected through Montreal. Looks good now.

Ashley's 3S was downgraded, and they also only had level 3 on the lift and 2 on the spin.

A fancam of Sui/Han's SP! 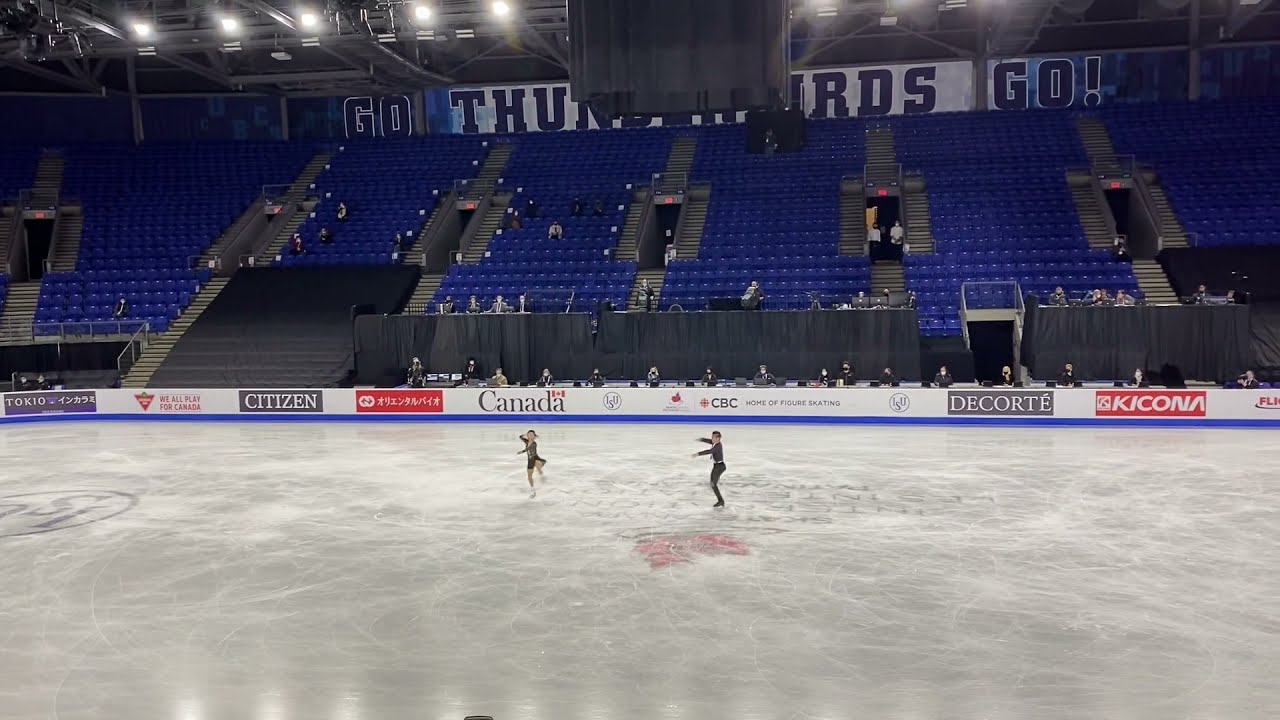 I"m halfway through the short program at the moment, but wow, such an enjoyable program from Pavliuchenko/Khodykin! I've truly grown into being a very interesting team! That crazy choreo was something - and I can read here it's all Betina Popova's doing! She's my favourite ice dance lady ever, I'm so happy she has opportunities to apply her skill and talent, and creates something this fun and special

Anybody else baffled by J\Rs Underrotation call?
I thought they'd be at least 3rd as it was a good looking element
S

3T3T said:
That’ll be a clear lead for S/H. Was her 3T on the q? Nice throw, not their best twist, very far apart on the spins, DS a bit shaky. Big score.

Being honest not the greatest short they have presented. Based on what I’ve seen so far. I’d have T/M and M/G ahead of them.
Click to expand...

Why people are upset with their marks. Very very generous considering how much they could earn later. if anything too high. It appears they can score 84 or 85 pts. and T and M only say 82. i dont think S and H are all that better when clean agst T and M. I realize they have a lot of fans but still. The other teams were marked harshly here and so should s and h.
I

withwings said:
I am perplexed too... J/R need to skate classical music, to stand out!
Why these endless pop music or vocal noises... not only for them but in skating in general

I completely agree. When I said something like this re: unremarkable music & program on one of J/R's YouTube videos, J's sister appeared in attack mode and was quite nasty. When skaters have family members lashing out at fans just because the fans share their respectful opinions about a program, it does not reflect well on them. Also makes me suspect they are quite stubborn and not open to any constructive criticism, which any artist should be used to if they want to grow and improve.

I'm surprised J/R got as high marks as they did. The program is so basic. Getting up into the lift looked weird, like Vanessa had trouble. And the unison on the spins was nonexistent. J & R don't have any chemistry and don't relate to each other on the ice. Then on top of that they skate to soporific music. Seems like J/R do not bring out the best in each other. Vanessa looks like a shell of her former self and no longer shines. Radford, whom I had expected to blossom in this new partnership, has wilted too. I have grown to appreciate Duhamel and Radford much more since watching J/R.
R

I thought Pavliuchenko/Khodykin were overscored for that skate, but then, none of the other teams besides Sui/Han really knocked it out of the park, so... Don't get me wrong, P/K's choreography is interesting and difficult, but I didn't think it was particularly well executed. There were many points where it looked messy and unfinished, very much lacking mileage. Take the unique exit from the triple twist, for example. Great concept, so-so execution. She has no extension in the star position and looks like her legs are bent. It gives it a messy look. In fact, she has no stretch and bent legs all over this program.

What happened to Moore-Towers/Marinaro's triple toes? This has always been one of their most consistent elements. I'm wondering now if there's an injury we don't know about. The triple twist, which had gotten better, looked pretty terrible here, though not the worst in the field. Are they really that thrown by James/Radford? They shouldn't be.

James/Radford are coming along, but they really should have been at this point last season, not in the season of the Olympics. Still, they will probably get the second Olympic spot, as things are looking right now.

Sui/Han were the class of the field, though not at their absolute best. This isn't my favourite SP of theirs, but I think it has potential. Right now they look like they're thinking through it too much, rather than performing full out. They need to perform full out. It's what they do better than anyone in the field.

Sui/Han presented what they are good at! That’s a smart strategy. For me, T/M is still trying to find their style, quite surprised this season they try to copy S/M, which definitely doesn’t fit them best imo, and both of the programs are too similar… 17-18 short program is T/M’s best one in my view
You must log in or register to reply here.