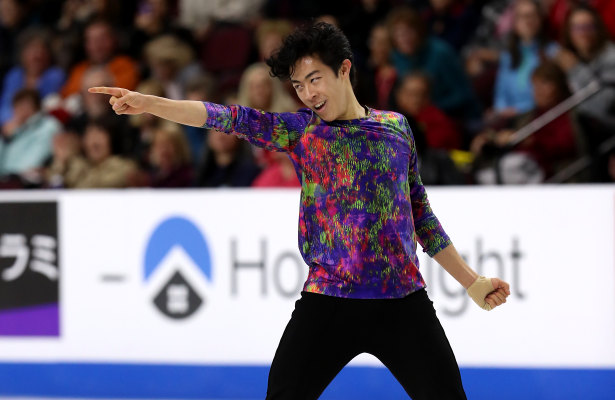 Sporting a bright multi-colored shirt, Chen peeled back the layers of his Elton John routine which featured music from Rocketman. The two-time and reigning world champion reeled off a triple Lutz-triple toe, quad flip, quad toe-Euler-double flip, and triple Axel in the first half of his program. He later landed a quad Salchow, but doubled what was meant to be a quad toe. Nevertheless, he landed a triple Axel-double toe and showed level 4 spins and pulled in the crowd with his level three step sequence. With a multitude of high positive grades of execution (GOE), the skater earned a score of 102.38 for the free skate and 299.09 overall.

Brown put out a powerfully dramatic routine to Schindler’s List which featured a triple Axel-double toe and excellent triple flip. In all, the 2019 U.S. bronze medalist landed seven triple jumps, however, the triple Lutz (in combination with a triple toe) received an edge call and he doubled a triple toe. While the program wasn’t perfect, the musicality came through in his choreography including level 4 spins and footwork which earned many positive GOEs. He finished second with 171.64 points, and with a total score of 255.09, moved up to second place overall.

“It was my first debut of this program, Schindler’s List,” noted Brown. “I’ve been working really hard on it all summer and getting into the emotion of it and working it through. I think I really tried to put my heart into it here. I had a rough go of it yesterday a little bit with confidence. I tried to put it behind me and focus on the performance and taking it one step at a time and really settling into it rather than getting ahead of myself.”

Aliev underrotated and fell on his opening quad Lutz, but landed a quad toe and quad toe-triple toe in his routine to “The Sound of Silence” performed by Disturbed. The 2019 Nepela Memorial gold medalist also later popped a triple Axel, but landed four more triples and earned a level 4 on two of his spins to finish third in the free skate with 156.98 points. His total score was 253.55 and the skater lost his second-place spot on the podium by 1.54 points.

“This is my first senior Grand Prix medal and obviously I am very pleased about it,” said Aliev. “This is a big medal for me and one of the most important ones in my life after the tough season I had last year.”

Japan’s Kazuki Tomono, who stood in eighth after the short, finished fourth in the free skate (154.71) and moved up to fifth overall (229.72). His routine to selections from Moulin Rouge included a quad toe-triple toe four clean triple jumps. The 2018 Rostelecom Cup bronze medalist took a fall on his quad Salchow and stepped out of a triple Axel, but earned a level 4 on his footwork and all spins.

Keegan Messing of Canada slipped from third to fourth overall (239.34) after his free skate to “November Rain” by Guns N’Roses. The 2019 Autumn Classic bronze medalist landed a triple Lutz, but then put a hand down on a quad toe, stepped out of a triple Axel and popped another triple Axel. Overall, the skater appeared unable to focus and only earned a level 3 on his spins and a 2 on the footwork.

Boyang Jin of China struggled during his routine, falling on  a quad Lutz and quad toe, as well as underrotating and two-footing a second quad toe. There were also several underrotations, but the  Chinese champion showed level 4 spins and footwork and finished sixth with 150.42. His total score was 224.98 and he rose from ninth to sixth place.

USA’s Alexei Krasnozhon fell on his opening quad flip, but landed a total of seven triple jumps, including two triple Axels. The 19-year-old finished sixth (144.29) in the free skate and moved up from 10th to ninth overall (216.59).

“Well I fell hard, painful,” Krasnozhon pointed out. “It was okay. I mean I’m not going to say I skated great and amazing. I made a mistake and I have to get up and continue my program and that was a good lesson for me. I think that I fell because I wasn’t prepared to do my quadruple jump yet. However, I’m glad that I put it in [my routine] and I’m glad that I tired it. I ended up skating a clean program afterwards. I’m just going to continue working and it’s going to be another learning experience for me.”

Alexei Bychenko of Israel landed his opening quad toe, but fell on an underrotated triple Axel. His spins and footwork were graded level 1 and 2 and he finished 10th in the free skate (139.94) and slipped to seventh place overall (219.70)