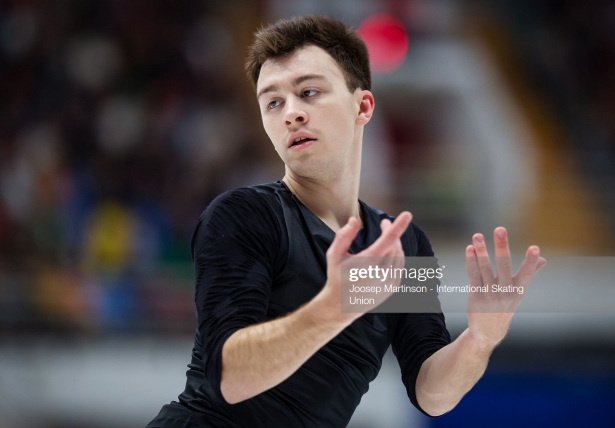 Dmitri Aliev performs his Free Skate to “The Sound of Silence” by Disturbed.

Dmitri Aliev captured his first national title at the 2020 Russian National Championships Friday in Krasnoyarsk in what was a turbulent Men’s competition. Junior Artur Danielian soared from 13th place to take the silver medal and Alexander Samarin pulled up from eighth to take the bronze. None of the top three after the Short Program made the podium.

Aliev stood in fourth place following the Short Program. He opened his performance to “Sound of Silence” by Disturbed with a nice quadruple Lutz, but then crashed on the quadruple toe. The 20-year-old recovered to land a shaky quad-double toe combination. He pulled off four more clean triples, but he underrotated the triple Axel and fell in the step sequence. With 173.63 points, the 2018 European silver medalist was ranked second in the Free Skate and racked up 260.98 points overall.

“I am very satisfied with the job I did in spite of the mistakes I made in the short and free program,” Aliev shared. “I am not upset, because I am pleased with what I am doing. Right now, I haven’t realized yet that I won. My coach said that this is my first serious title. I’ll put it this way: I did a lot to be on the podium and to be Russian Champion.”

Danielian really stole the show. Skating to La traviata, the 2018 World Junior silver medalist put out a perfect program that featured a quad Salchow-Euler-triple Salchow combination, another quad Salchow, two triple Axels as well as three more triples, level-four spins and smooth footwork. He received the top score of the day with 177.70 points and totaled 253.42 points to earn himself a belated present for this 16th birthday which he had celebrated a week ago.

“This is was my first senior Nationals,” Danielian noted. “I was nervous and wanted to show what I can do and what I have worked on with my coaches. Yesterday, not everything worked out, today, I had to go out with a new focus and I had to show what I was able to show what I am able to do.”

Samarin nailed his opening quadruple Lutz-Euler-triple Salchow combination, but then missed the quad flip and also a triple Axel. He managed a quad toe and four triples, but some landings were shaky. Nevertheless, the 2019 European silver medalist got 172.06 points and had 252.74 points overall to repeat as bronze medalists.

“There is nothing to say about my performances, because I didn’t show the level I wanted,” the 21-year-old said. “There is some time to regroup, work on the mistakes and go to the next events in a better shape.”

Samarin seemed to be affected by a health problem, but did not want to talk about it. “Nothing really happened to me. I think it doesn’t make sense to talk about it. I came to the competition to show my best, but it didn’t happen. As they say, there is no use crying over spilled milk. We’ll return home and will think through it and prepare for the next event.”

Overnight leader Makar Ignatov stepped out of the quad Salchow and triple Axel, but landed a quad toe and six triples. However, his spins were slow and labored and had low levels. The Grand Prix Rostelecom bronze medalist dropped to fourth at 249.46 points.

Andrei Mozalev slipped from second to fifth on 240.55 points. He fell on a double Axel and his two quad toes were not clean. The ISU Junior Grand Prix Final silver medalist looked exhausted, and his coach Kirill Davydenko explained that he had been taken ill.

Fourteen-year-old prodigy Daniil Samsonov missed some jumps as well, but still moved up one spot to sixth place. He accumulated 240.01 points. Petr Gumennik, who had overslept and missed the morning practice, struggled with the quad Salchow and dropped from third to seventh on 238.08 points.

Sergei Voronov, at 32 years old and the oldest man in the competition, placed ninth (233.82 points). The two-time National Champion tripled the quad toe and repeated one jump too many that didn’t count, but he still was rather happy.

“I fought for each single element,” he said.

Some people felt like this might have been his last competitive performance, but Voronov left it open. “After this event, I’ll sit down with my coaches and talk things through. I always loved, love, and will love figure skating, and I will be involved in the sport for sure, but we will see in what capacity.”

Andrei Lazukin, who is nursing a knee injury, faded from fifth to 12th after several errors (223.09 points).