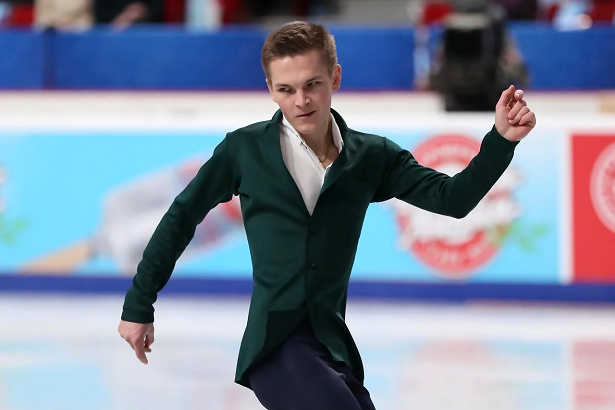 Mikhail Kolyada took the lead with a strong performance in the Men’s Short Program at 2020-21 Russian Nationals in Chelyabinsk on Thursday. Makar Ignatov is four points behind in second place, followed by Mark Kondratiuk, who surprised in third.

Kolyada opened his entertaining program to “Let’s Get Loud” with a big quadruple toe-triple toe combination. The two-time Russian Champion stumbled a second later on a connecting step, but didn’t let that little mishap derail him and landed a nice triple Axel and a triple Lutz. His excellent spins and footwork were rated a level four and the 25-year-old from St. Petersburg scored 102.48 points.

“I did everything as planned, but it was not ideal,” said Kolyada, regarding the stumble. “There is always something left to work on.”

The 2018 World bronze medalist explained that he had been ill, but not with COVID-19.

“There are still some problems, but we’re doing everything possible to do a good job,” the two-time European bronze medalist noted.

Kolyada doesn’t think the cancellation of the ISU European Figure Skating Championships has affected his motivation.

“I personally have a lot of motivation,” he said. “It is obviously sad that major events such as the European Championships are cancelled, but we have alternative competitions such as the Russian Cup Final. There are competitions and that is good. We are athletes and we should compete and that is what we are doing.”

Ignatov’s program to “I Can’t Go On Without You” featured a quadruple loop, quad toe-triple toe and triple Axel. The skater from St. Petersburg collected a level four for his spins and footwork as well, but lost on the grade of execution compared to Kolyada as the spins were slower and looked less precise. Ignatov earned 98.30 points.

“Many elements were not done at the highest level, also the jumps,” the 2019 Rostelecom Cup bronze medalist admitted. “I was a bit shaky on the landings.”

“Before the Championships, we were at a training camp in Sochi,” said the 20-year-old. “So far, the climate change does not affect me. It is harder for me to adapt to a time change, especially when it is small, like two hours as it is the case here. At night, I fall asleep fine, but then I woke up at two and that was it. And in the morning, I had to go to practice – which was five a.m. St. Petersburg time. It was hard, but there is nothing you can do about it.”

In his senior national debut, Kondratiuk, hit a triple Axel, quad Salchow, and triple Lutz-triple toe in his routine to “Summertime” and picked up a level four for the three spins and a level three for the step sequence. The 17-year-old from Moscow netted 90.88 points.

“Coming here, I did not think about placements,” said the skater who trains with Svetlana Sokolovskaia at CSKA Moscow. “I just wanted to skate my best. To be in third now is a surprise to me.”

Andrei Mozalev took a painful looking fall on his quad flip attempt that was downgraded. The reigning ISU World Junior Champion recovered to complete a quad toe-triple toe and a triple Axel in his program to “Sadness” by Enigma and came fourth with 89.47 points. He went off to ice his leg and did not talk to journalists in the mixed zone.

Skating to the Russian folk song “Polyushko-polye,” Alexander Samarin fell on his quad Lutz and slightly underrotated his triple Axel, but he landed a triple Lutz-triple toe combination. His spins and footwork were all graded a level 4 and he earned 87.96 points for fifth place. He has been hampered by injury and illness.

“My health had, like for everybody, its ups and downs,” shared the 2019 European silver medalist said. “First my back hurt, then I fell sick. I tested positive on the corona virus. I was sitting at home, but it was just a cold. I did what I was ready to do and I am still in contention.”

Artem Kovalev nailed his jumps – quad Salchow, triple Axel and triple Lutz-triple toe, but went down in the footwork. He came in sixth (87.45 points).

“I wanted to give it all in the footwork,” said the 17-year-old from Moscow. “I wanted to do the twizzle quickly. I did the first turn and thought ‘good’ and then something went wrong. The twizzles are dangerous, even the ice dancers can fall on them.”

Petr Gumennik fell on his triple Axel and had to fight for the quad Salchow. He is currently eighth (84.93 points). The Rostelecom bronze medalist revealed that a week ago his back started to hurt and he was unable to train the quads too much.

Evgeni Semenenko, who was considered another top contender after a strong showing at the St. Petersburg Championships earlier this month, faded to 11th after stumbling on his triple flip (he still added a triple toe, but that did not count as a combination) and falling on the sit spin (79.86 points).

The Men’s event concludes with the Free Skating on Friday.

What are your thoughts on the Men’s Short Program? Discuss here.