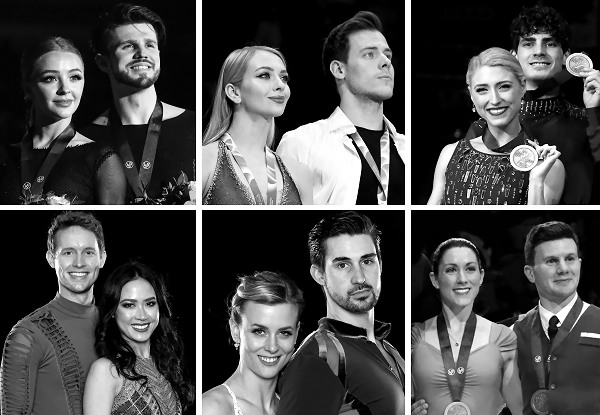 The race for the title and medals in the Ice Dance event in Stockholm is open with several strong contenders aiming for the top prize. Four-time and reigning ISU World Figure Skating Ice Dance Champions Gabriella Papadakis and Guillaume Cizeron of France are sitting out the Championships this year, so this will prove to be an exciting event for the teams competing.

Sinitsina and Katsalapov were expected to challenge for the world title last season following their victory at the ISU European Championships over top-favorites Papadakis and Cizeron—a major upset in the world of ice dance, but the event was cancelled. This season has not been easy for the Russian team. First they were both battled injuries at the beginning of the season, and then after claiming gold at the ISU Grand Prix Rostelecom Cup, both skaters contracted the corona virus. Sinitsina, in particular, suffered severe lung damage and needed a long time to recover, and as a result, the team missed the national championships.

The 2019 World silver medalists came back for the Russian Cup Final which easily won as top rivals were absent. The team kept last season’s Free Dance to “Songs My Mother Taught Me” feeling that this program is the better choice as it has more mileage.

Hubbell and Donohue have established themselves as medal contenders. After taking silver and bronze at the ISU World Championships in 2018 and 2019, the three-time U.S. Champions are now aiming at the top of the podium. They competed at both Skate America and U.S. Nationals, skating off with gold at both events.

The skaters that train at the Ice Academy of Montreal, Canada, are one of the few ice dance teams to have changed both programs this season—they dance to Burlesque in the Rhythm Dance and to “Hallelujah” in the Free Dance.

Last season, Chock and Bates had gained a lot of momentum, earning silver at the ISU Grand Prix of Figure Skating Final and striking gold at the ISU Four Continents Championships and the U.S. Championships.

The two-time World medalists did not compete at Skate America, but went to U.S. Nationals where they lost to Hubbell and Donohue. Chock and Bates have kept their popular “Egyptian Snake Dance” Free Dance as well as their Rhythm Dance to Too Darn Hot.

Stepanova and Bukin had a difficult start into the season as she first had back problems and then both were sick with Covid-19. They came back to win their first National title in December and competed successfully at the Channel One Team Cup as well.

The multiple-European medalists came close to the World podium in 2019, finishing fourth (second in the Rhythm Dance). They have kept both programs from last season, but changed the second part of their Rhythm Dance to “The Show Must Go On” and have polished their Free Dance to “Cry Me a River.”

Piper Gilles and Paul Poirier (CAN)

Gilles and Poirier have been knocking at the door of the top five at World Championships and are hoping for a breakthrough in Stockholm. The 2020 ISU Four Continents silver medalists have not yet competed “live” this season due to Skate Canada cancelling all events.

The 2020 Canadian Champions did not change their programs and are skating to “Mack and Mabel” for the Rhythm Dance and to “Both Sides Now” by Joni Mitchell.

Guignard and Fabbri looked strong in the national Italian events they competed in earlier this season. The 2019 European bronze medalists ranked 8th at the 2019 ISU World Figure Skating Championships and are looking for a top-six finish this time.

The reigning and three-time Italian Champions come with a new Free Dance to Sweden, dancing to music from the Atonement soundtrack by Dario Marianelli and to “Little Sparrow” by Abel Korzeniowski.

The competition features several other interesting teams that are all close to each other in terms of points and ability. Tiffani Zagorski and Jonathan Guerreiro (FSR), Kaitlin Hawayek and Jean-Luc Baker (USA), Laurence Fournier-Beaudry and Nikolaj Sorensen (CAN) and Sara Hurtado and Kirill Khaliavin (ESP) are among those to watch.

How close do you think you can predict the placements? Cast your votes and see if you can win your own medal! Don’t forget to join your fellow figure skating fans in the competition threads to share in the excitement when the ice dancers take the ice on March 26th for the Rhythm Dance!