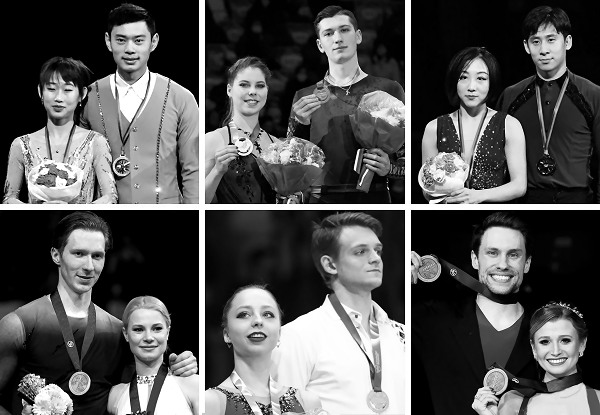 The Pairs event at the 2021 ISU World Figure Skating Championships in Stockholm, Sweden, is shaping up as a Chinese-Russian battle for dominance in the discipline. Twenty-six pair teams have been entered for the competition—which is a rarely-seen high number. The upcoming Olympic Games motivate many countries to send pair teams and 16 spots are on the line for direct qualification.

Sui and Han enter the race as a dark horse as they have not competed since the 2020 ISU Four Continents Championships. They had an excellent season in 2019-20 and appeared to be on their way to their third world title, but then Worlds was cancelled. This season, the 2018 Olympic silver medalists were scheduled to compete at Cup of China but withdrew as Han was still recovering from hip surgery he had over the summer.

Nevertheless, the two-time World Champions have come back after long breaks before and it did not prevent them from winning medals and titles. You can be sure that this powerful team will be one of the top contenders when they come to Stockholm.

Tarasova and Morozov had two difficult seasons in 2018-19 and 2019-20, but they bounced back looking refreshed and strong this season. The two-time World silver medalists had a late start into the season as first Morozov, and then Tarasova, caught the coronavirus. They returned to form in December to capture their third national title after losing it last year to Aleksandra Boikova and Dmitrii Kozlovskii.

The two-time European Champions have improved their consistency on the side-by-side jumps since they have been working with former single skater Sergei Voronov. They have crafted a new long program to “Adagio” performed by Dimash Kudaibergen and went on to perform well, albeit not flawless, at the Channel One Team Cup in Moscow and recently at the Challenge Cup in The Hague, Netherlands.

Boikova and Kozlvoskii were considered shooting stars last season. The 2020 European Champions are a very young team at ages 19 and 21, but they have progressed fast. This season, the students of the legendary Tamara Moskvina and Artur Minchuk had a few issues with their throws and lost their national title to Tarasova and Morozov.

Nevertheless, Boikova and Kozlovskii are an excellent team and they are upgrading the technical content of their Free Skate by including a triple Salchow-Euler-triple Salchow combination. The team from St. Petersburg is also has a little surprise in store for Worlds.

Peng and Jin have been making lots of progress since teaming up in 2016. The Chinese looked on track last season after claiming silver at the ISU Grand Prix Final and at the ISU Four Continents Championships. They were assigned to Worlds, their third trip as a team, but the event was cancelled.

This season, Peng and Jin won their home Grand Prix Cup of China easily with solid performances. They have grown as performers and their side-by-side jumps seem to have improved. Their free skate to Cloud Atlas is also a crowd-favorite.

Mishina and Galliamov are only in their second second season at the senior level, but are progressing at a fast rate. They beat their Russian rivals at a national event, but faltered at the national championships. However, the team from St. Petersburg rallied back and with excellent performances at the Channel One Team Cup and the Russian Cup Final where they secured their spot on the team.

The 2020 Rostelecom Cup silver medalists have been training under Moskvina and Minchuk since last March alongside Boikova and Kozlovskii. They obviously have benefitted from these changes and are technically actually the most consistent of the Russian teams.

Kirsten Moore-Towers and Michael Marinaro (CAN)

Two-time national champions Kirsten Moore-Towers and Michael Marinaro picked up some momentum last season and qualified for their first ISU Grand Prix of Figure Skating Final. They were not able to compete this season as both Skate Canada and nationals were cancelled due to the pandemic, but they finished an easy first at the 2021 Skate Canada Challenge in January. They want to continue to climb up in the international ranking in Stockholm.

Alexa Knierim and Brandon Frazier (USA) have only been skating together since last summer, but they looked strong and struck gold at the ISU Grand Prix Skate America and the U.S. Championships. Italy sends the experienced Nicole Della Monica and Matteo Guarise, who competed at national events. Ashley Cain-Gribble and Timothy LeDuc (USA) also return to Worlds eager to prove that they belong to the top teams in the world.

2018 Four Continents bronze medalists Tae Ok Rom and Ju Sik Kim (PRK) are not entered for Worlds. There has been no recent information on the status of this team nor the reason for their absence.

How close do you think you can predict the placements? Cast your votes and see if you can win your own medal! Don’t forget to join your fellow figure skating fans in the competition threads to share in the excitement when the pairs take the ice on March 24th for the Short Program!