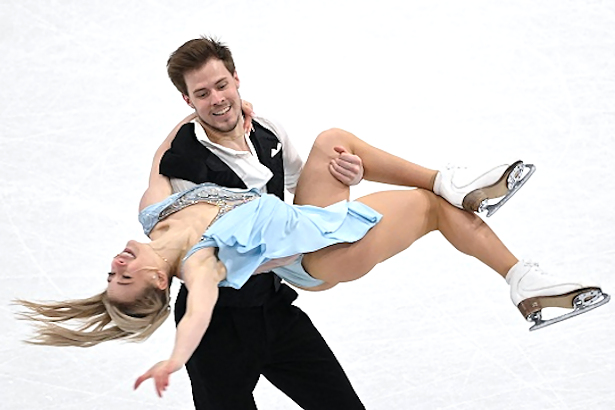 The race for the title and medals in the Ice Dance event in Stockholm is open with several strong contenders aiming for the top prize. Four-time and reigning ISU World Figure Skating Ice Dance Champions Gabriella Papadakis and Guillaume Cizeron of France are sitting out the Championships this year.

Sinitsina and Katsalapov showed very strong level-four twizzles in their jubilant routine to Singin’ in the Rain, picking up many high positive grades of execution (GOEs) for the element. The 2019 World silver medalists also impressed with a level-four rotational lift and pattern steps in which she earned a level three and he a level four. The team from Moscow scored 88.15 points.

“We are quite satisfied with our performance,” said Katsalapov. “We were well-prepared. In general, we showed what we can do. Everything was clean enough, with soul, easy enough. Our coaches, our team is also happy, so we have a very good feeling. We are thrilled with the work we did today and before the competition, so we feel great. We skated with our soul and we enjoyed it. The only thing we lacked was the audience.”

Hubbell and Donohue were the only team in which both ice dancers scored a level four in the pattern steps in their enticing routine to music from Burlesque. The 2019 World bronze medalists also earned high GOEs on their strong level-four twizzles and rotational lift, and showed good level-three steps to earn 86.05 points.

“We are very proud of ourselves,” said Hubbell. “We were pretty present today and we just really focused on each other coming back to the performance, so we are happy to give that strong performance at the worlds championship.”

“The goal is always to be the best that we can be,” said Donohue. “We believe in ourselves and want to be the best in the world. For now the focus is on each other as we have something very special and what makes us special is the connection to each other. Focusing on things outside our control is just a waste of our energy.”

Chock and Bates lost a level on the twizzles—both scoring a level three on the element—in their entertaining routine to Too Darn Hot. Chock earned a level three on the pattern steps while Bates received a level four. The level-four straight-line lift garnered many high GOEs and the 2020 Four Continents Champions earned 85.15 points.

“It was really a fun one for us,” said Chock. “We enjoyed ourselves from start to finish. Unfortunately, we lost a few levels, but we are happy with the way we performed.”

“One of our goals was not to hold back and think we gave a heartfelt  effort,” added Bates. “We definitely want to win the gold. We think the work we put in and the training that we’ve done has prepared for this event we are as strong as we have ever been. We are fairly confident and we have great programs. We just love to skate and it really comes across the way we are performing and I think it certainly did and we’ll try to do the same tomorrow, but the goal is to win the gold.”

Piper Gilles and Paul Poirier of Canada put out a confident routine to Mack and Mabel which featured close and strong level-four twizzles and a clever rotation lift, however, the Finnsteps were only graded a level 2. Gilles also received a level two on the pattern steps while Poirier scored a level four. The 2020 ISU Four Continents silver medalists are currently in fourth place with 83.37 points.

“I think we were absolutely thrilled,” said Gilles. “We were a little nervous not having had competitions this season, but we definitely knew we had the training behind us. This was probably one of the easiest programs we’ve done—even since last year. I think we were pleased that we stuck with our training and didn’t do any more or no less.”

“I didn’t really notice it was empty! ” said Poirier about not having an audience. “We went on blinders-mode and really just lived the performance. We felt very present in our bodies. Sometimes you can feel the energy of the crowd but are not aware of people being around you, and I think that’s when the performance is the most real. It was so nice to be in a competition setting again. We’ve done lots of simulations at home, but really competing with a panel with the top couples in the world—that’s a very different feeling and it felt so good!”

Alexandra Stepanova and Ivan Bukin (FSR) produced a stunning level-four curve lift and strong twizzles—both of which garnered high GOES—in their well-developed dance to Moulin Rouge. However, the multiple-European medalists were not as clean as usual in their steps and scored 83.02 points for fifth place.

“We are upset with the mistakes, not so much with the marks,” said Bukin. “I hope it’s not the last worlds and tomorrow is another day. We’ll go to the hotel, have some rest and regroup for tomorrow.”

“I made a severe mistake, so am very upset,” added Stepanova.

Italy’s Charlene Guignard and Marco Fabbri are in sixth place with 81.04 points. Their entertaining routine to music from Grease featured a creative level-four straight-line lift and good twizzles.

“Of course this was the first (international) competition and probably the last competition of the season,” said Fabbri. “We didn’t know what to expect, so we are really proud of what we performed today, because there were no major mistakes. Of course, we don’t have any big events season because we couldn’t compete, just as everyone else. We stepped on the ice and we didn’t know exactly how we would approach the competition.”

The Ice Dance event will conclude with the Free Dance tomorrow.