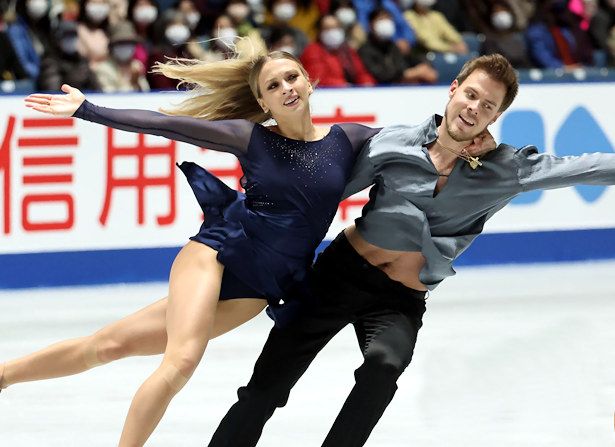 Sinitsina and Katsalapov were smooth in their romantic dance to Sergei Rachmaninov’s “Second Piano Concerto” which featured excellent lifts. The 2020 European Champions picked up a level four for the lifts, combination spin and twizzles. However, the midline step sequence and the one-foot step sequence were rated a level two (and level one for her part). The Muscovites scored a new personal best in the Free Dance (129.11) for first place and overall (215.44) for their fourth ISU Grand Prix title.

“We really enjoyed performing today thanks to the audience,” said Sinitsina. “We did a good job for this moment, but we will continue to improve for the next competition.”

“It was a great day,” Katsalapov added. “We are happy with our performance and we are incredibly thankful for the support of the Japanese crowd. We want to improve further, but for now we are happy. Our program is about us, our career and hopefully with a bright finish.”

Katsalapv shared that he has been focusing on healing from his back injury and noted that their speed was not that great in Tokyo compared to what they do in training.

There is “no special story” about them regarding their Free Dance routine according to Sinitsina. “It’s about the soul of Russia and it ends in a very glorious way,” she said.

They will compete next at their home Grand Prix in Sochi, Russia, and hope to book their ticket to the Final there.

Chock and Bates had a rocky start when Bates fell at the beginning of their on a transition before the first element. The two-time Four Continents Champions instantly recovered and continued without further mistakes, collecting a level four on the lifts, twizzles and spin a level three for for the one-foot steps and diagonal steps. They received 124.76 points and remained in second place overall at 210.78 points.

“Today’s performance was an interesting one, mostly because I fell within the first 20 seconds of the program,” Bates said. “I’ve never experienced something like that before. We responded well and put together a good performance considering the early mishap. We learned something from that type of performance.”

“We are building a great momentum,” said Chock of their clever “alien and astronaut” routine. “Our program still has a lot of potential to grow and we hope to show up at the Final better than ever. We feel like every skate is a step up from the last. ”

With their two silver medals and 26 points, Chock and Bates should qualify for the Grand Prix Final.

Fear and Gibson delivered an entertaining routine with their upbeat performance to “The Lion King” that featured a spectacular stationary-rotational lift as well as a level-four curve lift and combination spin. The circular steps were graded a level two and Gibson had a wobble on the twizzles which were graded a level four for her and three for him. They 2019 Skate Canada bronze medalists netted 115.58 points and took the second Grand Prix medal of their career with 191.91 points.

“I think we put in a lot of work in the days between Skate Canada and coming here,” Fear commented. “We had a lot of improvements to make and a lot of feedback from that competition, so I was happy with what we put out and I feel like we implemented a lot of the things that we worked on.”

“We want to spice up our choreo lift,” she added. “In general, we want to work on our skating skills and on the consistency of all the elements.”

Sara Hurtado and Kirill Khaliavin of Spain, who stood in fifth after the Rhythm Dance, moved up to fourth overall after the Free Dance (111.69/188.09).

“We are happy with our performance and feel really thankful to the audience,” said Hurtado.

Teams were asked who their Olympic heroes are and Hurtado replied, “I am a really huge fan of Aliona Savchenko. She tried so hard until she won the gold medal. She is the queen for me.”

“Every athlete who makes it to the Olympics is a hero because everyone has a great individual story to tell,” said Khaliavin.

“We are not at the level of the skating skills that the best couples are on,” noted Lajoie. “We need to be very clean with our lines.

“We were able to skate clean and did as in practice,” said Takahashi. “We are really happy about that!  We told each other after the performance that we did good. I apologized for losing balance during the choreo lift. I was shouting, ‘Sorry! Sorry!’ and it was a funny moment.”

“We didn’t feel anxious,” he continued. “We were able to go calmly through all of our elements. We need to work on our quality and the edge work to obtain the levels that we want and also work on the GOE. There is still a large gap we want to close to the top teams.”

“When we were bowing, we realized now many people were cheering for us,” said Muramoto. “It’s so great to skate at an international competition in our home country.”

“There were a lot of things that didn’t go as we wanted them,” said Koleto regarding prior to coming into the event. “We really wanted to skate for the people today and I think we did that really well. We were more nervous than usually. I  think I never felt as much pressure as I felt right now. Having achieved a personal best despite this nervousness gives us a lot of confidence.”

“We need to work more on staking closer to one another,” he added. “Our coach was really happy that we were able to achieve a personal best. We improved already, but we still want to become better. Our goal is to score over 180 points. Hopefully we can do a lot of intensive lessons in order to improve for Japanese Nationals. This is the most important time in our lives. It’s really difficult right now.”