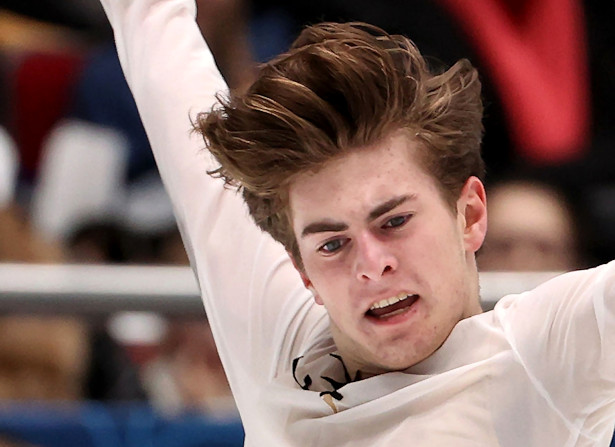 Mark Kondratiuk skated off with gold at the 2022 Russian National Championships in St. Petersburg Friday in what was a competition with a lot of shuffling in the standings. Mikhail Kolyada pulled up from fifth to earn the silver medal while Andrei Mozalev jumped from eighth after the Short Program to grab the bronze.

Kondratiuk stood in second place (97.77) following a clean Short Program and laid down another great performance to Jesus Christ Superstar in the Yubileini Sports Palace. The Muscovite reeled off a quad toe, quad Salchow-double toe, another quad Salchow as well as two triple Axels. However, a triple Salchow in a sequence with a triple Lutz didn’t count. The 2021 national bronze medalist ranked third in the Free Skating with 186.60 points, but overall moved up to first at 284.37 points. The new Russian Champion was at loss at words.

Kolyada had singled the Axel in the Short Program and was fifth (94.26) in the Short. After the Grand Prix in Sochi, the three-time National Champion had gone back to his successful program The White Crow from the past season. He nailed a quad Salchow, quad toe-triple toe as well as two triple Axels, but he tripled the second planned toe and doubled the Salchow in his jump sequence with a triple Lutz. The 2018 World bronze medalist won the Free Skating segment with 189.44 points and totaled 283.70 points to win his sixth medal at the Russian Championships – he now has three silver medals and three gold.

“I have mixed feelings,” admitted Kolyada. “Not everything worked out, but it is a good motivation to continue to work. My program right now does not yet look like the way I want it to look. We went back to it when the Grand Prix Final was cancelled, and I had only two weeks to get back into it. It is not that easy. I didn’t do everything, but it’s the motivation to work more. I haven’t skated this program for a while, and I had to remember all emotions again.”

Like in other competitions this season, Mozalev struggled in the Short Program (90.98) where he fell on an underrotated quad Salchow. The 2020 World Junior Champion rallied back in the Free Skating to 1492: Conquest of Paradise and hit three quads plus five triples. His only error came when he crashed on the second triple Axel. Mozalev ranked second in the Free Skating with 187.30 points and soared to his first podium at the National senior level with a total of 278.28 points.

“I did not expect that result. I did not skate clean, I fell on the triple Axel. So I can’t say it was a good performance,” Mozalev commented. “I did not watch the last skaters, I was very nervous.”

Evgeni Semenenko won the Short Program (98.03) and maybe that put too much pressure on him. The 2021 National Junior Champion fell on his opening quad toe and although he recovered to land a quad Salchow and quad toe-triple toe, he sealed his fate when he popped a triple Axel into a single. He slipped to fourth at 274.28 points.

Petr Gumennik gave a solid performance to Spartacus that included a quad toe and quad Salchow-double toe-double loop combination and moved up from seventh to fifth (267.45 points).

“I feel satisfied as I did everything I am capable of at this point,” the 2020 World Junior bronze medalist shared. “I didn’t have enough strength for the Axel because my quad muscles were overloaded. I have to improve my stamina and I am working on my endurance. I also will have more quads in the program.”

Alexander Samarin missed his quad Lutz and remained in sixth place (264.73 points). 2020 European Champion Dmitri Aliev disappointed in 9th place (251.40 points). He made several errors on jumps in both programs and looked tired.

“Too bad that it went that way and it is a shame that not only I am suffering from that. First of all it is my team that went with me, put efforts into me and I did justify their work,” he said.

His training mate Makar Ignatov faded from third to 10th after most of his jumps were wobbly (250.77 points).

“My boots have been falling apart since October,” said Ignatov. “I couldn’t change them because there’s no time to break in new ones. I don’t say it’s boots’s fault, but overall… I land, and my leg is shaking.”

Alexey Erokhov, who stood in fourth after the Short Program (95.24) finished seventh overall (261.48). “On the combo, my problem was I relaxed too much,” he said. “I didn’t think about fighting for Olympics. I want to work more and start attending big events.”