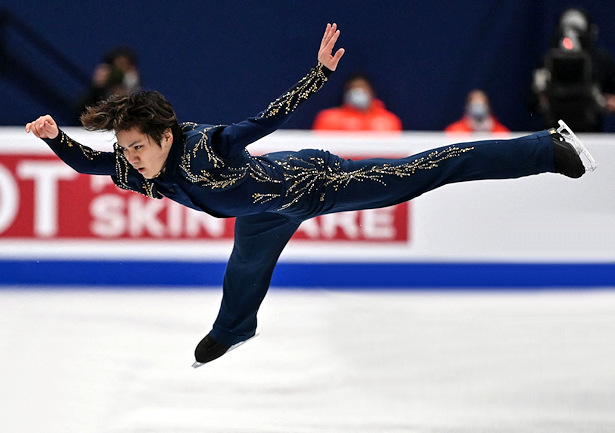 The Men’s event at the 2022 World Figure Skating Championships concluded with the Free Skate on Saturday in Montpellier, France. Japan’s Shoma Uno maintained the lead to win his first world title after taking bronze at the Olympics last month. Teammate Yuma Kagiyama won the silver in his debut at this event, while USA’s Vincent Zhou rose from sixth place to capture the bronze.

While not perfect, Uno didn’t have to be with an 11-point lead coming into the free skate. The two-time World silver medalist landed a solid quad loop, quad Salchow, quad toe-double toe, and quad flip. The only mistakes came when he underrotated and turned out the landing of a quad toe and popped a flip in a triple Axle combination. He earned many high grades of execution (GOE) throughout his routine to “Bolero” which also featured level-four spins and footwork, finishing first in the free skate with a career-best of 202.85. His total score was 312.48.

“This was my last short and free program for this season, so I wanted to have a performance that made my coach Stephane Lambiel proud,” said Uno. “I was able to achieve that and I haven’t won too often, so I’m very happy about that. The choreography of this program is very challenging and I had to challenge myself for five quads.”

“It was a very challenging year in a physical way,” the 24-year-old added. “That I came here under these circumstances makes me really happy and I’m grateful for my score after having a difficult experience last time in France. When I was training by myself, I didn’t reach the results I wanted to reach. I changed clubs very suddenly, so at the beginning, I didn’t want to be too much of a burden to Stephane. I wanted to enjoy training even if I was doing it by myself. Many athletes might be skating by themselves, but that’s not for me because it complicates your thoughts. If you skate for others, those who are close to you, those who support you, like your coach for example, you can feel more relaxed. I want to make Stephane proud.”

“During my steps I thought I was doing enough and I was really getting tired, but I wanted to do justice to Stephane,” Uno explained of his smile during the second half of the routine. “I was watching all the performances of the previous groups, so I knew very well where I was. All my emotions went into a smile at the end of my program.”

“I would like to have an even better score than this season and grow,” Uno said of his goals. “The most important things is to enjoy one’s skating. And above that, I want to challenge myself until my limits without getting injured. Also, I don’t want to be scared of losing. Growing means to learn from the defeats and improve until the coming season.”

Kagiyama underrotated and put a foot down on a quad loop and popped an Axel, but produced a solid quad Salchow, quad toe, and quad toe-Euler-triple Salchow in his “Gladiator” routine. The spins and footwork were graded a level four and the Olympic silver medalist was also rewarded with many high GOEs throughout. He scored 191.91 points for second place in the free skate and overall (297.60).

“Today it didn’t go as well as at the Olympics,” admitted Kagiyama. “I made some really bad mistakes on the (quad) loop and the Axel. Emotionally, I was really nervous and that’s the reason why I couldn’t do so well. The tension was maybe because I had a great opportunity to win and I was trying to put on a perfect performance, so maybe that fed my tension. Last season at the Worlds, I won the silver medal and maybe I put on too much pressure and lost focus and objectives. But I was able to regain my focus in the end and that was a big growth factor for me in this season.”

Zhou underrotated several jumps in his routine to Crouching Tiger, Hidden Dragon, but managed a quad Lutz, quad Salchow, and triple Lutz-Euler-triple Salchow. Two spins were graded a level four as was the footwork and the 2019 World bronze medalist finished fourth in the free skate with 181.54 points. With a total score of 277.38, he moved up from sixth to third overall.

“I feel very, very proud of myself,” said Zhou. “A week ago, I wouldn’t have thought any of this was possible. I couldn’t do anything in training leading up to this. I don’t want to sound like a broken record, but as I’ve said a lot of times, I was mentally in a very bad place. I couldn’t do anything. But I got myself on the plane, I got myself together. I took it one practice at a time, and now I’ve put out two strong performances. And I’m so proud of myself.”

“I’m still very upset over the loss of that opportunity at the Olympics,” he added, “but I’m very grateful that I still had the chance to compete here at Worlds. I did some great things out there, and there is a lot for me to learn and grow from.”

Morisi Kvitelashvili of Georgia, who stood in seventh after the short, finished fifth in the free skate with a new personal best (179.42) and fourth overall (272.03). The 2020 European bronze medalist landed a quad Salchow-triple toe, quad toe-double toe, and quad toe. The only errors came when he underrotated and stepped out of triple flip in his fun routine to a Frank Sinatra medley.

“It was cool!” said Kvitelashvili of his new personal best. “I managed to have a lot of fun from the arena, from my skating. In general, I’m satisfied with the placement, however the first part of the short program and a small mistake on the flip in the free have spoiled the overall impression. It wasn’t ideal, but I’m glad that I could get myself together, to skate and to show what I’m able to do, to please the audience. I’d like to thank everyone.”

“We are going to continue to work, maybe some shows, after that we’ll see,” he said of his plans for next season, adding he will more than likely compete next season. “For now, there are no long-term plans.”

USA’s Camden Pulkinen, who stood in 12th after the short, gave the best free skate of his career (182.19). Skating to “Besame Mucho” by Il Divo, the 22-year-old landed a quad toe-triple toe, quad toe, and triple Axel-Euler-triple Salchow. He went on to land four more clean triple jumps and earned a level four on the footwork and two spins, placing third in the free skate. With a total score of 271.69, he soared to fifth place overall in his debut at this event.

“It feels still surreal,” said Pulkinen. “I think I’m still processing the fact that I’m actually at Worlds! When I skated that program I knew that I was well-trained for it. I’m just very thankful it happened and I was happy I could give myself a nice 22nd birthday gift (his birthday was on Friday). It’s my first full clean free skate.”

“Tentatively, the plan is to get a real strong base over the summer,” he said of his goals. “(I want to) really be super fit so once I’m at Columbia (University), I’ll have a little more room to focus on school. So over the summer I plan to train really hard, get new programs and really maximize the training I can get.”

Japan’s Kazuki Tomono, who stood in third after the short, fell on a quad Salchow and struggled with other jumps to finish eighth (168.25) in the free skate. The 2022 Four Continents silver medalist slipped to sixth overall (269.37).

“I had this wonderful opportunity to skate at the end of the season and so I’m very lucky and happy about this experience,” said Tomono. “However, I have regrets that I couldn’t put on my best in this performance. I didn’t really feel pressured, it was more the lack of practice and I realized that I am not yet ready to be on the podium, so I need to practice harder.”

“Skating in the final group was a great experience for me and I realized what I lack to win a medal, so I gained a lot,” he added of his experience. “I want to be a better and stronger skater to win medals. This season I had a lot of competitions where I came close to winning a medal. The results didn’t follow yet, but this is going to help me for next season. There is still a lot to do, but I fought well through this season.”

“I think it was more pressure on myself, just wanting to skate good so badly and it kind of didn’t work out,” said Malinin, who stood in fourth after the Short. “I feel I was maybe a little bit too into the program. It was just a mess so it’s hard to explain what happened.”

Malinin will compete next at the upcoming World Junior Figure Skating Championships.