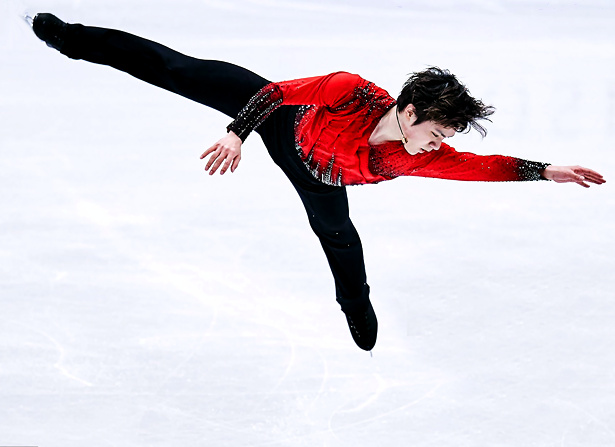 Coming off an Olympic bronze-medal win, Uno topped his previous score in Beijing with a new personal best score of 109.63. His technically-packed “Oboe Concerto” routine featured a solid quad flip, quad toe-triple toe, and triple Axel. The skater was also rewarded with very high grades of execution (GOE) for all elements, including level-four spins and footwork.

“I could pull off my performance exactly as I always do in practice,” said Uno. “It is a really difficult thing to put all the power I have in my training into the competition, so I’m glad it worked out.”

“My free skating is full of difficult jumps, like the quad loop and Salchow,” he added. “Of course the jumps are important as well, but also the other elements are significant. It was choreographed by my coach Stephane Lambiel, so I really want to make the best out of it to make him proud. In the past three years I have changed so much. Three years ago I was skating towards the end of my career, but now I am skating for the future. I am amid the journey of my growth, so I want to show that.”

Kagiyama turned out the landing of a triple Axel, but his program to “When You’re Smiling” by Michael Bublé was otherwise flawless. The 2022 Olympic silver medalist racked up many high GOEs for all other elements, including a quad Salchow and quad toe-triple toe. All spins and footwork were also rewarded with a level four and he sits in second with 105.69 points.

“My triple Axel was a little bit cautious and I couldn’t perform as good as during my practice, but the two quads were like the best ever, so I’m very happy about that,” said Kagiyama.

“I haven’t changed my layout since Olympics,” he added of his Free Skate. “I also haven’t really improved the (quad) loop, so I will do my best and try to pull it all together. I’m tired from the Olympic Games, but this is the last opportunity for performing this season, so I want to show my best!

Tomono turned in a new personal best of 101.12 for third place after his skate to music from Cinema Paradiso which featured quad toe-triple toe, quad Salchow and triple Axel. All spins were graded a level four while the footwork garnered a level three.

Tomono came into the event as a replacement for Kao Miura who is recovering from a left quadricep injury.

“When I first heard the news about competing at Worlds, I was very surprised, but I immediately agreed to participate,” said Tomono. “So I changed gears and was able to focus on preparing for this competition. I was on my way to Printemps when I heard about Worlds, so I used the competition to tune up my mental state since I had already worked on the technique throughout the season.”

USA’s Ilia Malinin topped his previous personal best by nearly 20 points with a score of 100.16 for fourth place after his skate to “Billie Jean” by David Cook. The skater, who won gold in both Junior Grand Prix events earlier this season, produced a solid quad Lutz, quad toe-triple toe, and triple Axel. All spins were graded a level four while the footwork was a level three.

“I definitely delivered it today and I hope to deliver it on Saturday for the long,” said the U.S. National silver medalist. “I’d say that it (quad Lutz) was better than the one I did at nationals because I felt I had better air time, my landing was a lot cleaner, and I had a lot more speed coming out.”

The 17-year-old, who is coached by his parents, has four quads planned for the Free Skate: Lutz, two toe loops, and a Salchow. The skater has also confirmed that he will compete at the upcoming World Junior Figure Skating Championships next month.

Daniel Grassl of Italy produced a quad Lutz, triple Lutz-triple toe, and triple Axel in his routine to music from The White Crow. All spins and footwork were graded a level four and the 2022 European silver medalist picked up a new personal best of 97.62 for fifth place.

“It’s my personal best and my season best,” noted Grassl. “It didn’t feel too good on the ice when I was skating, because I always felt that the ice was scratchy. But I’m happy how I skated because I gave really everything. My goal was to be here and to do this first competition good and it’s what I achieved. I’m very happy how I did because it was very difficult after the Olympics mentally to go again on the ice, but I’m very happy how I fought for it.”

USA’s Vincent Zhou slightly underrotated the front end of a quad Lutz-triple toe and then underrotated a quad Salchow, but landed a solid triple Axel in his “Vincent” routine. The 2019 World bronze medalist is currently sixth with 95.84 points.

“That short program was definitely a great moment for me,” said Zhou. “All the stuff I’ve been through (at the Olympic Games – when he tested positive on Covid-19 and was unable to compete in the individual event)… last week I couldn’t even get through a full program. I couldn’t even do a good jump. I got on the plane, got here, took one step at a time, and managed to skate like that so it definitely feels great.”

Morisi Kvitelashvili of Georgia is currently in seventh (92.61) after stepping out of quad Salchow.

“I had a good impression today,” said Kvitelashvili. “I wasn’t nervous at all. It’s a pity that the first jump was done with a mistake and then I had to do a combination in the second half of the program. So, only this disturbed me a bit, otherwise I’m very well prepared.”

The Men’s event will conclude Saturday with the Free Skate.